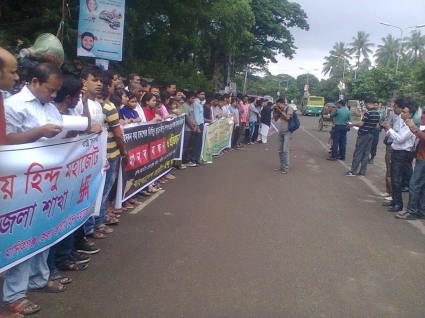 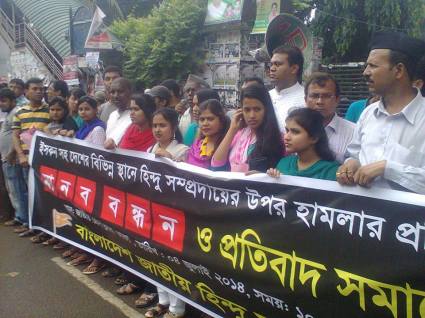 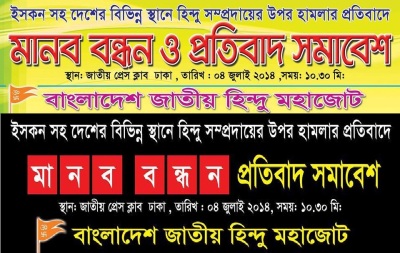 Pinak Das | HE Media Bureau | Dhaka | 4 July 2014::  Recent Attacks on an ISKCON temple and continuing persecution of minorities has sparked sit-in demonstration and ‘human chain’ protest rally  in Bangladesh. On 1st July Muslim crowds numbering near 150 people threw bricks at the ISKCON temple gate in Swamibag in Dhaka, the capital city of  of Bangladesh.  More than eight ISKCON members were injured in the sacred Ratha Yatra week .

To protest this attack on ISKCON temple and Chariot festival of Lord Jagannath along with the continuing persecution of Hindus and other minorities in Bangladesh, a sit-in protest program was held outside the National Press Club in Dhaka today on July 4 2014) at 10am onwards.  The program was organized by the Bangladesh Jatiya Hindu Mohajot and its alliance viz. Jago Hindu Parishad, Justice For Hindus forum etc.

Leaders of Bangladesh Jatiya Hindu Mahajote on Friday at a protest rally in the city called on the Awami League-led government to take immediate steps to stop attacks on Hindu minorities across the country.

Jatiya Hindu Mahajote (National Hindu Grand Alliance), Bangladesh  which is actually  a rights body of the Hindu minorities held this rally in front of the National Press Club, where its general secretary, Sri Gobinda Chandra Pramanik said that  attacks on the Hindu minorities increased  at many places in the country in recent times.

“Some miscreants attacked ISKCON temple at Sawmibag in the old part of Dhaka during the preparation of Rathajatra last week, but they were not punished”, Gobinda Chandra Pramanik communicated to the press.

Moreover, the Hindu minorities in Bangladesh have been  suffering from insecurities for the attacks on their temples, houses and business centers in different parts of the country, the Mahajote leader clarified.

He demanded separate voting systems in 50 seats of the parliament reserved for the Hindu minorities, to ensure their representation in the House in a meaningful way.

The rally was followed by a protest procession that paraded the city streets with slogans, demands in poster and festoons.

A contingent of police force was deployed there to maintain the rally and see the matters related to law and order. 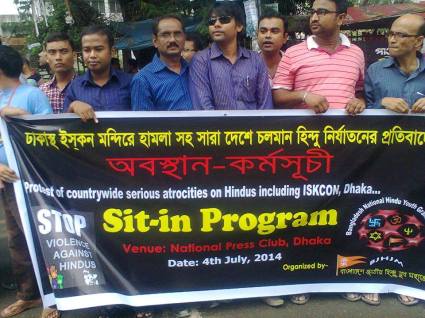 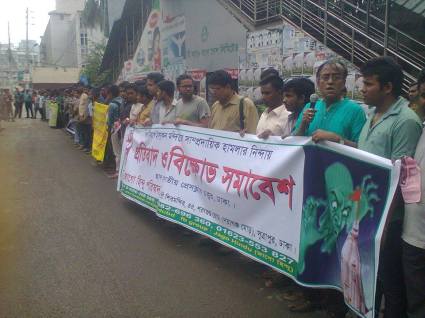