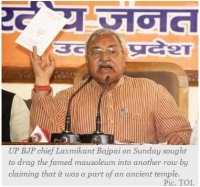 PTI  Bahraich, December 08, 2014:: BAHRAICH: After Azam Khan’s demand of handing over the Taj Mahal to UP waqf board, the state’s BJP chief Laxmikant Bajpai on Sunday sought to drag the famed mausoleum into another row by claiming that it was a part of an ancient temple.

He also alleged that “Azam Khan has usurped property of waqf and was now eyeing the world heritage Taj Mahal.”

SEE: Taj Mahal should be handed over to waqf board: Azam Khan.

“Azam’s dream to offer namaz five times at Taj will never be fulfilled,” he said.

On November 13, Khan had said that the Taj Mahal, one of the wonders of the world, should be declared a property of the state’s waqf board. 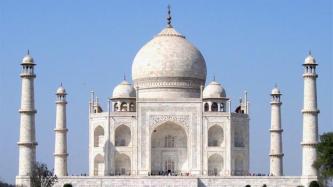 Khan, during a convention of ‘mutawallis’ (caretakers) asked chairman of State Sunni Central Waqf Board to make Taj Mahal a property of the board and appoint him as ‘mutwalli’.

Though, later, when reporters asked Azam about his controversial statement, he said,”why you take things said in a lighter vein so seriously.”

However, spokesman of All India Shia Personal Law Board, Maulana Yasoob Abbas, has told PTI, “As far as Mumtaz Mahal is concerned, she was a Shia, but Taj Mahal is heritage of the country and it should not be handed over to Sunni or Shia boards.”

“Shia and Sunni boards are unable to maintain their mosques and madrasas then how will they handle Taj Mahal. If the issue of handing Taj Mahal to the waqf board is raised then Shia and Sunni will come face to face, therefore it should be kept away from the tussle,” he added.

Related:: Taj Mahal: was it a Vedic Temple? by Stephen Knapp.

The Tajmahal is Tejomahalay, A Hindu Temple: P.N. Oak.

The Controversy Surrounding the Origins of the Taj Mahal: BBC.

Courtesy: PTI and the links used above.