Everyone is born not as a Muslim, Owaisi brothers’ forefathers were also Hindu.

Owaisi should go for a DNA Test. That will prove that He is also a Hindu. ~ Dr Subramanian Swamy.

NOW PROVED: Everyone is born not as a Mullā, Owaisis’ forefathers were also Hindu.

Upananda Brahmachari | HENB | New Delhi | 07 January 2015:: While AIMIM chief Asaduddin Owaisi says ‘everyone was born as a Muslim’, Dr Subramanian Swamy prescribes him to go for a DNA Test to be sure that his ancestors were Hindus. Earlier, T Raja Singh Lodh, the fierce Hindutvawadi Leader and BJP MLA of Goshamahal Assembly constituency of Hyderabad city claimed that he possessed the proof that the great grand father of infamous Owaisi brothers was a Hindu.

AIMIM chief Asaduddin Owaisi has added fuel to the raging fire over conversions, on Monday claiming that everyone was born Muslim.

“Everyone is born a Muslim, and then the person is converted to other religions. Ghar wapsi is meant for those people want to return to Islam,” said Mr Owaisi, referring to the Hindi phrase for homecoming used by right-wing groups, who have stoked controversy by organising conversion ceremonies for religious minorities, conducted by VHP, Dharma Jagaran Manch and Arya Samaj.

Actually the Muslim and Christian minorities in India have been increasing their numbers with unimaginable growth. While number of Muslims has been increased more than five times since independence (1947), the Christians have been doubled or tripled their numbers zone-wise.

Earlier Mahant of Dwarka Shaktipeeth, Swami Sadanand Saraswati, on Sunday had claimed in a RSS function at Karnavati (Ahamedabad) that every person on earth is born a Hindu first.

RSS chief Mohan Bhagwat also said there that India is a “Hindu nation”, which was seen by opposition parties in the same negative light as many remarks by Hindu right wing organisations in the recent past.

Claim for ‘all are born Muslims first’ by Asaduddin Owaisi, Member of Parliament of Hyderabad was a rebuttal of the claim of Swami Sadananda or other Hindu saints that all are born Hindus as Hindu is the oldest faith in this world and proclaimed as ‘Sanatana’ far before 1435 years Islam or 2015 years Christianity.

Now, in retaliation the came from Hindu thin-tank and BJP leader with a request to Owaisi for DNA test.

BJP leader Subramanian Swamy  said that Owaisi’s ancestors were Hindus as challenged by him. Swamy thinks that a DNA test for Owaisi brothers Asaduddin (AIMIM MP from Hyderabad) and Akbaruddin (AIMIM MLA from Chandrayangutta) will positively prove their Hindu ancestry.

These days, the issues of religion, conversion and reconversion are in full swing  in the country, after which each political party is giving their statements. 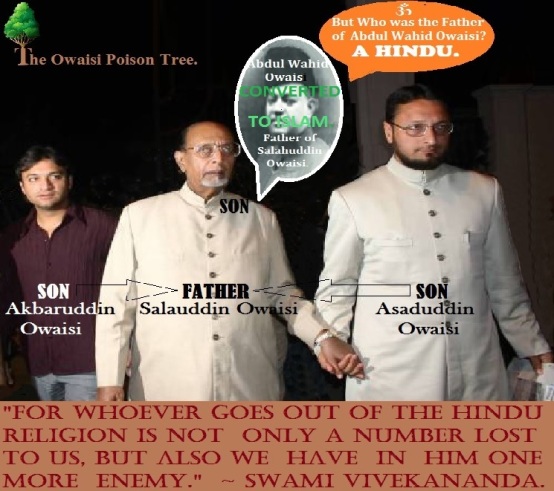 Some MPs of BJP has claimed the statement of PM Narendra Modi  in Parliament on the issue as a standing MP of AIMIM cannot fuel over Hindu statement by saying baseless claims like ‘ all are born Muslims’. Subramanian Swamy is now to see that what repercussions come out of his statement about a ‘DNA Test’ for a Member of Parliament.

In a lecture given in January, 2013 in a 150th Birth celebration function at  Bhagyanagar (Hyderabad) T Raja Singh Lodh the then leader of Shri Ram Yuva Sena – now BJP MLA of Ghoshamahal unearthed that infamous brothers and their forefathers upto  Abdul Wahed Owaisi had a dangerous Islamic legacy of Rajakars and they played a very dangerous anti Indian role.

As per T Raja Singh the great grand father of Owaisi borthers  was a Hindu and they are now doing like enemy of Hindus as the matter was illustrated by Swami Vivekananda in his great saying that, “For whoever goes out of the Hindu religion is not only a number lost to us, but also we have in him one more enemy.” (Rules and Regulations of the Ramakrishna Math Belur, 1898).

Watch this video of T Raja Singh exposing the truth about Owaisi clan.

21 comments on “Everyone is born not as a Muslim, Owaisi brothers’ forefathers were also Hindu.”