Massive victory in UP: BJP must keep its Hindutva promises fair to win Gen Election 2019.

PM Modi wins ‘heart’ of India, gets head start for 2019. But, he has to make real his election promises well and ahead.

The Massive Success of BJP in Uttar Pradesh Election is a referral to the core Hindutva issues.

Upananda Brahmachari | HENB | Haridwar | March 11, 2017:: The assembly election results of five states in 2017 are announced in a ‘Saffron Saturday’. In two states viz. Uttar Pradesh and Uttarakhand, BJP set a record win to form govt there. In Punjab BJP and its ally Shiromani Akali Dal have badly defeated and Congress will form the Govt. In Goa and Manipur, the fight was neck to neck and BJP came second after Congress emerged there as No. 1 and there is the possibility of Congress to form govts also there. 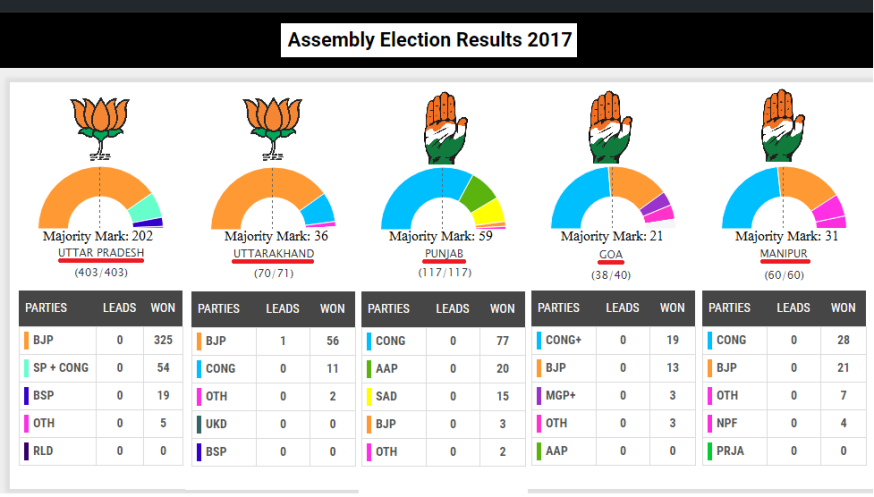 If these results prove true without the pendency of any ‘horse trading’ or other ‘political culpability’, in this so called semifinal match for 2019, BJP has gained prestige points in the away matches rather. The final trend for 2019 Gen. Election will definately be set in the home matches in Gujarat assembly election due at the end of 2017 and 2018 assembly elections in Madhya Pradesh, Rajasthan and Chhattisgarh.

For the present, this massive win in Uttar Pradesh and Uttarakhand and big grab in Manipur politics, it will certainly give strength to BJP for getting majority in Rajya Sabha members. As a result of it,  BJP will be successful to elect its candidate for Presidential post of India in June-July 2017, on its own strength.

With this saffron surge in India, BJP is now able to rule 13 states (excluding Goa and Manipur) on its own or with its allies. 53.93% of Indian population is now under Saffron rule and 63.6% territory of India comes under Saffron Rule.

Unexpected success of BJP and Hindu Vote Bank in UP.

The victory of BJP in Uttar Pradesh is massive and unexpected both. A huge win in 325 seats by BJP without any alliance out of total 403 assembly seats could not be sensed earlier by anyone anyway. All the predictions, exit poll results etc. proved bogus before the unprecedented BJP wave and its outcome in UP.

The conflicts of father and son in the family of UP CM, SP’s alliance with corrupt Congress, the nude politics of Muslim appeasement and offering huge seats to Muslims by Mayawati’s BSP, Casteist politics adopted by the  SP-BSP both, insecurity problems like Kairana as faced by Hindus, growing Muslim aggression in  social life, incumbency factors and many other things may be the causes for the breakdown of the cycle of Samajwadi Party, permanent paralysis in the hands of Congress or running away of the Elephant from the Circus tent of Bahujan Samaj Party. But, the blooming of 325 lotus at a time in the muddy water of Uttar Pradesh is certainly a miracle.

Giving all credits to the BJP election managers, party workers  and its supporters in UP, it cannot be ignored anyway an emerging Hindu Vote Bank politics in India as a retaliation of Muslim Vote Bank Politics. Uttar Pradesh has proved it now.

The pseudo-secular parties tried to polarize the Muslim votes all along. Now, it is the time for BJP to encash its modality  as Hindu Vote Bank otherwise.

In its unbelievable stand BJP could not file any Muslim candidates in Uttar Pradesh election this time but gathered huge Muslim votes in party’s favour. More analysis is awaited in this regard.

But, after many years, UP govt will be formed without any Muslim minister and this is also apprehended in other four states for the peculiar result sequence under unique Hindutva Politics! There is a chance in Manipur, if the lone Muslim candidate who won the election there, is included in the Congress ministry to be formed there anyway.

But, what is more significant that a consolidated Hindu Vote Bank can switch over the Muslim votes into BJP’s fold. Analysis shows that BJP won 85 seats out of 115 Muslim influenced assembly segments in UP this time.

Though the intention of demonetization by PM Modi is intensive and wise, the process of implementation can be debatable. But, protesting demonetization with political culpability by most of the opposition hit back them as a boomerang.

The results of BMC (Brihanmumbai Municipal Corporation), Panchayat Election results in Odisha and now the results of assembly elections in five states proved that Public is with Demonetization and obviously not against it. There is also clear sign of public endorsement for many Modi policies like sacrificing Cooking-Gas-Cylinder subsidy, Surgical Strike on Pakistan or efforting the end of Triple Talaq.

As a ruling party of India, BJP must work and speak for development. The economic policies and developmental works undertaken by BJP cannot be set aside from the election propagations without prioritization of its state to state needs and demands. But, the core-Hindutva issues which are synonymous with BJP cannot be rejected anyway.

In this UP election, BJP’s promises for Ayodhya Ram Temple, Banning Cow slaughter, Returning Kairana Hindus with full dignity and security, Uprooting Jihadi elements from the soil of Uttar Pradesh, Security of common people and women from the hands of hooligans and Making UP as a riot free state, grossly sensitized the Hindus to vote for BJP this time.

Modi Mantra has worked again in Uttar Pradesh. There is no doubt of it. His election carishma is proved once again in UP. PM Modi efforted maximum election campaigns in this state. But, he went to other states also. He went to Panjim in Goa for election campaign,  his election rallies in  Jalandhar and Ludhiana were also good. But, BJP has defeated in Punjab and and Goa both.

It must be understood that Modi face works there where the base of Hindutva is ready to accept it.

This election signifies the strength of Hindutva wave in which Modi face can be glorified and can emerge with a victory sign.

With the help of Hindutva wave, Modi can win principally with the secondary help of development and other issues. The Hindutva poster boy image of Modi is still significant and relevant.

Hindutva and development are co-related in BJP politics. One should not forget that Hindutva is the lifeline of BJP.

PM Modi wins ‘heart’ of India, gets head start for 2019. But, he has to make real his election promises well and ahead.

UP Result 2017 and the BJP incumbency factor for General Election 2019.

The hard earned victory of BJP in Uttar Pradesh this time should not be indulged into the backlash of incumbency factors for General Election 2019.

Incumbency is very crucial factor in the scenario of election politics in India.

Akhilesh Yadav in Uttar Pradesh and Laxmikant Parsekar in Goa, both are victim of incumbency partly or greatly.

The father and son conflict in UP and the divide of RSS in Goa are the other major factors for the defeat of  Akhilesh and Parsekar in their states.

If the voters  cannot be satisfied with election promises or see very opportunistic move to dupe them, they obviously retaliate with their voting power.

Keep promises. Do it now.

BJP is going to form new govt in Uttar Pradesh and Uttarakhand in some days. But, they should not forget their election promises and its brand Hindutva line.

After gaining 3/4 majority like that in UP and UK, they can’t blame anymore the shortage of support or difficulties to keep its own promises.

If  Ram Janmabhoomi Temple is not built in Ayodhya before 2019 or they can’t make the ban on cow slaughter and illegal abattoirs in UP in its actuality, people will reject BJP in 2019 General election. The people of UP will also withdraw its wholehearted support to BJP in future.

There are so many promises made by BJP for development and Hindutva causes. Now, they have to prove that those promises are not any ‘Jumla’ (fake promises) and they must make those real things without delay.

3 comments on “Massive victory in UP: BJP must keep its Hindutva promises fair to win Gen Election 2019.”