BJP is bearing the flag of Hindutva only for political gains: Promod Muthalik.

Like Congress, BJP is also not helping Hindutva: Pramod Mutalik. 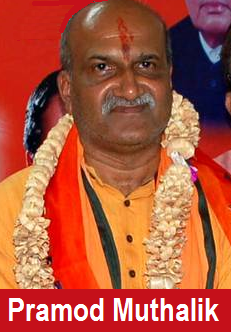 Upananda Brahmachari | HENB | Belagavi | Dec 20, 2017::  Ex RSS Pracharak (whole timer) and Bajrangdal Leader and Sri Ram Sene founder Pramod Mutalik has blamed the Congress for the law and order disturbances in Belagavi, but felt that the BJP was also not helping the Hindutva cause either.

“I think both the Congress and BJP leaders are same. They are not helping in any way the Hindus in crisis and all of them are engaged in Muslim appeasement for simple vote bank politics” Muthalik said.

“Belagavi North MLA Md. Firoz Sait is directly behind most of the law and order disturbances in the city. He has been giving illegal shelter to Bangladeshi refugees, only to enrol them in voter lists and get their support in elections. Md. Sait is also behind Monday night’s stone pelting. He is creating such problems only to strengthen his position before the assembly polls. He is putting undue pressure on the police not to arrest his followers who are involved in such events”. Mutalik told media persons at his residence in Belagavi.

Jihadi miscreants  entered Hindu homes and destroyed household goods. Some bikes and auto rickshaws were burnt. ACP Belagavi Shankar Marital was injured in the stone pelting.  Miscreants were trying to create communal tension in the above areas.

Tear gas shells were used to disperse crowd and control the situation.

Hindu residents of the disturbed areas were attacked and frightened to leave the areas. However, the BJP leaders were not helping the Hindu cause either, Muthalik added .

Leaders like Suresh Angadi, BJP MP from Belagavi (Belgaum), are putting on masks of Hinduism for the sake of the elections. They have no real commitment towards protecting the Hindu interests. They are acting like flag bearers of the Hindutva only for political gains, Muthalik said.