Kirttika Tripura murdered after rape at Khagrachhari in B’desh. 3 Jihadis arrested. What next? 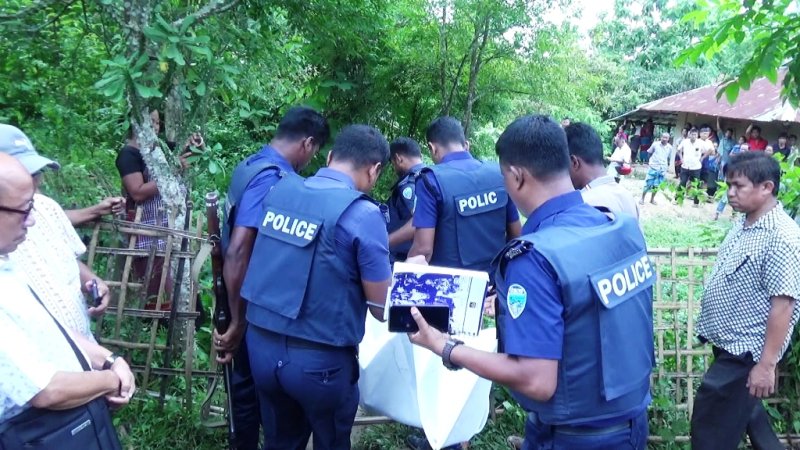 Police officials carrying the body of a Tripura schoolgirl, Kirttika on their way to hand it over to her family on Sunday, July 29, 2018, a day after she was reportedly raped and killed in Dighinala upazila’s Noymile area at Khagrachhari. Pic Courtesy: Dhaka Tribune.

Atul Brahmachari | HENB | Dhaka | Aug 1, 2018::  A Tribal schoolgirl of Hindu root was murdered allegedly after rape in Dighinala upazila of Khagrachhari on Saturday (28/07/2018).

Kirttika Tripura (Punati), 9, was a class-IV  student at Noimail Government Primary School in the upazila.

Locals said Kirttika left school for her home in Noilmail area during the lunch break on Saturday. However, when her mother Onumoti Tripura, a farmer, returned home from work in the evening, Kirttika was not there.

There was no one else in that house. Kirttika’s father died in a road accident nearly five years ago.

Worried sick, the mother searched almost every house in the village but did not find her daughter.

Moreover, the school authorities informed her mother that Kirttika Tripura never returned school after the afternoon break. Later, with the help of Dighinala Police, Kirttika’s dead body was found dumped in a bush within 150-feet of the victim’s residence at Tapan Karbari Para.

According to local sources, a truck was parked in front of her house, with 3/4 Bengali men glancing piercingly at her. The victim’s mother went to jhum cultivation and no one was at home during that time. The victim’s mother found her daughter missing after returning home from work in the evening. Then she started searching for her daughter. Later she spotted some bloods in the bushes near their house. Later the victim’s dead body found laying on the grass, with her clothes ripped and body all battered. The perpetrators raped her, slit her throat and vagina, stabbed in her arms, face and all over her body with knife and penetrated her anus with sticks.

On 29 July 2018, Onumoti Tripura, mother of the deceased lodged a complainant with Dighinala Police Station against some suspect people (accused of rape and murder) under the Women and Child Repression Prevention Act. The filing case number is 4. Dighinala Police have been arrested 3 suspects in connection with the rape and killing of Kirttika Tripura on 30 July 2018 from Boalkhali area of Dighinala. The detainees are 1) Shah Alam (33), son of late Md. Mobarak; 2) Nazrul Islam Bandari (32) son of Md. Jalal Uddin and 3) Monir Hossain (38) son of Fazar Ali.  However, the remaining perpetrators are still at large.

Reports say that the Muslim perpetrators of the area linked with various Jihadi outfits frequently attack, abduct, rape, torture and persecute the local Hindu, tribal and indigenous minorities only to frighten and uproot them from their own place of living.

After discovering the dead body of the victim, the police sent it to the Khagrachari Sadar Hospital for postmortem. The dead body was handed over to family members on 29 July Sunday morning after an autopsy at Khagrachhari Sadar Hospital. The hospital’s Resident Physician Dr. Noyonmoy Tripura said they had found sharp weapon wounds on different parts of Kirttika’s body.

Sources said, the hands of Kirttika were severed and her personal parts were mutilated multipliedly with sharp weapons.

Response from the Administration:

Protest in the Hill against the killing:

On 29 July 2018 local people of Dighinala protested by blocking the road and demanded justice. Later they also submitted a memorandum to the Home Minister of Bangladesh through Upazila Nirbahi Officer of Dighinala upazila.

On 30 July 2018, Chittagong Hill Tracts International Commission (CHTC) strongly condemned the rape and murder of a schoolgirl in Khagrachhari and demanded exemplary punishment for the criminals. Manusher Jonno Foundation (MJF) also expressed deep shock and concern over the incident and demanded punishment for the perpetrators.

On 31 July 2018, students, political activists and different organisations demonstrated in 9 upazilas protesting the vicious murder and rape of the Tripura girl. Primary School Teachers Association of Dighinala organized a human chain in Dighinala Upazila headquarters and protested against the hilarious acts of the perpetrators.

Protest in different parts of the country:

On 31 July 2018, Hill Students Council of Chittagong University and Pahari Shramik Kalyan Forum organized a protest rally against the rape and killing of Kirttika at Cheragi Pahar More in Chittagong city demanding arrest and punishment of the perpetrators.

On the other hand, the Security Forces of Khagrachari obstructed the rally of the indigenous students relating to the rape and killing of Kirttika Tripura Purna and stopped them from continuing it on 31 July 2018 at Guimara upazila in Khagrachari district.

On 1 August 2018 the Security Forces of Bandarban impeded the peaceful rally of Sochetan Chatro Somaj relating to the incident of the killing of the Tripura girl at Noimile area under Khagrachari.

In recent months, from January-June 2018, at least 18 human rights violations incident on indigenous women both in plain and CHT have been observed. A total of 23 indigenous women were subjected to the victims including killing, gang rape, rape, torture, sexual harassment in which, 2 were killed after rape and more 4 were killed, 2 was gang raped, 7 were raped, 5 were attempted to rape and 3 were sexually harassed and assaulted in Bandarban, Chittagong, Khagrachari, Mymensingh, Rangamati and Dhaka. In the month of May alone, two indigenous Tripura girls were brutally killed after rape in Sitakunda upazila of Chittagong district. Besides, two teenage Tripura girls in two separate incidents were also gang raped in Bandarban and Khagrachari in April and June respectively. The very heart-breaking incident – rape and sexual harassment of two Marma sisters from Bilaichari, Rangamati – was reported in January. They, along with their parents, are still kept confined with police security at Vedvedi area in Rangamati municipality since January 2018.

There was a huge Human Chain and Candle Light Protest against Rape and Murder of Kirttika Tripura on Aug 1, 2018 in Kaghrachari. In the middle a protester wore the mask of Kirttika’s face. Source: FB.

Against the brutal rape and murder by the suspected Jihadi miscreants public in Bangladesh took the roads and streets in protest at many places. There was a huge Human Chain and Candle Light Protest against Rape and Murder of Kirttika Tripura on Aug 1, 2018 in Kaghrachari. Many protesters wore the mask of Kirttika’s face.

In various social media platform, the protesters expressed their grave concern about the dreadful situation of Minorities of Bangladesh using the hashtag  #JusticeForKirttikaTripura which was trending in top. The liberal civil society in Bangladesh demanded speedy probe on Kirttika’s Murder along with death sentence for the culprits.

Does Indian Foreign Minister know the brutal rape and murder of Kirttika?

The lowly equipped (on Bangladesh Minorities Matter) Indian Foreign Minister Smt. Sushma Swaraj perhaps does not know the day-to-day dreadful persecution upon Bangladesh minorities including the Rape and Murder of a flower like girl student Kirttika Tripura. Even she does know it, her repercussion is near to zero.

Weeks ago, Swaraj’s statement on Bangladesh minority Hindus astonished the experts on BD Minorities as she stated that BD Govt would be careful about the persecution on minorities as Hindus on increase as per latest data of Statistical Bureau of Bangladesh.

To suppress the avid inaction of Indian Govt to take care for the recurring persecution of Indian root people in a neighboring country and to mend the India-Bangladesh Relation in two current crisis like Rohingya deportation and NRC (40 lakh people are out of National Register of Citizens, most of them are Bangladeshi Muslims), Smt. Sushma Swaraj just made a great lie on BD minorities and gave a ‘good’ character certificate to Bangladesh Govt.

Sushma Swaraj did not rely upon the documents and research on Bangladesh Minority persecution and decreasing numbers of Hindus made by experts like Salam Azad, Prof. Dr. Abul Barkat, Dr. Sachi Ghosh Dastidar,  Gary J Bass, Taslima Nasrin, Sitangshu Guha, Upananda Brhamachari, Mohit Roy and many. Even, Smt Swaraj perhaps forgot the views of BJP WB unit on the killing, persecution and annihilation of BD Minorities in  recent times.

As the Islamic persecutions on Bangladeshi minority Hindus and others are exposed in broad daylight, the present Bangladesh Govt is trying hard to manipulate the Census and Statistical Data to prove that minority Hindus and others are safe in Bangladesh and their numbers are increasing. Lie, Lie and Lie. Reality of Bangladeshi minority position will be published very soon. But, Swaraj has now way of  absolution from a great sin for supporting the stand of Bangladesh Govt to show the false increases of minorities who are actually pitiably dying and vanishing. Kirttikas rape and murder count a less number of minorities in our list, but may not from the list of Hasina and Swaraj!

Kirttika Tripura silently saying many things from heaven about Bangladeshi minorities. Hello Sushma Aunty, do you hear me? Do you tell about our dying conditions to your bosom friend BD PM Sheikh Hasina?

One comment on “Kirttika Tripura murdered after rape at Khagrachhari in B’desh. 3 Jihadis arrested. What next?”