Non­-brahmin Hindu woman performs as a Priest in Saraswati Puja in a Malda College.

Those who always try to describe Hindus as biased….

Non­-brahmin woman breaks the glass ceiling by appearing as a Priest in Saraswati Puja. 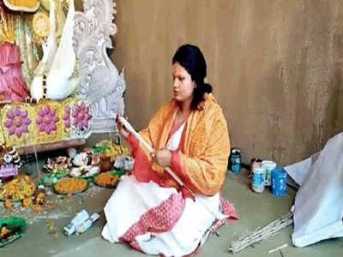 The purohit — a former student of the college — 24 ­year old Sulata Mandal led hundreds of devotees while performing the anjali (flower offering through hymns) on Sunday.

Student leader of the college Sankhamoy Talukdar said, “When we were preparing for this year’s Saraswati Puja, our teacher Naraya Sahu proposed to engage Sulatadi as the priest. She is training to be a priest in Kolkata and had expressed her wish to be a purohit here.

A resident of South Dinajpur’s Gangarampur, Mandal completed her MA in Bengali from Malda College two years ago. “Every woman performs the puja at her house. But while performing a community puja, we always look for male Brahmin priests. Why are the women barred from conducting such events?” she asked.

Mandal started training under Kolkata ­based priest Subhankar Chakraborty after her MA. “Going through the Vedas, I found that there was no restriction on women and non­ Brahmins in this regard. I performed all rituals following the Yajurveda. I did everything — from invoking the goddess and performing yajnas (fire sacrifice rituals)  to offering the pushpanjali.”

Students Ankita Dutta and Kasturi Sarkar were elated with Mandal’s performance. “It was no different than the pujas performed in the previous years. We are very satisfied with our purohit,” Dutta said. Following tradition, the purohit was given her dakshina (honorarium) apart from a sari, sweets and fruits.

Kasturi said, “Our college set an example for the rest of the state,” Sarkar said.

Teacher Pijush Saha said, “The students did a commendable job by taking the decision. This is a huge leap for women empowerment.”

One comment on “Non­-brahmin Hindu woman performs as a Priest in Saraswati Puja in a Malda College.”