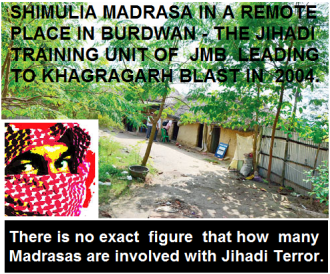 Sanket Mitra | HENB | New Delhi | July 3, 2019:: The Ministry of Home Affairs (MHA) in its reply today on whether there are reports that madrasas in West Bengal are preaching religious extremism and helping the terrorist organisations revealed that there are some inputs on Bangladeshi terror outfit Jamaat-ul-Mujahideen using some madrasas in the state for “radicalization and recruitment activities”.

As per the ministry’s reply to questions put up by BJP MPs – Khagen Murmu and Sukanta Majumdar of Maldaha Uttar and Balurghat Parliamentary constituencies respectively – several madrasas in Burdwan and Murshidabad are being used for terror-related activities. The MHA, Govt of India further added that relevant inputs in this regard are shared with the state governments in the country.

“There are some inputs of Jamaat-ul-Mujahideen Bangladesh using some Madrasas in Burdwan and Murshidabad for radicalization and recruitment activities,” the MHA also said in a written reply in Lok Sabha.

Earlier today, the Special Task Force of the West Bengal Police arrested a member of the Jamaat-ul-Mujahideen from the same Burdwan district where MHA flagged the radicalisation in madrasas by the banned outfit. According to reports, the accused has been arrested in connection with January 2018 Bodh Gaya blast.

The Jamaat-ul-Mujahideen is a terrorist organisation that has links with Pakistani terror group Lashkar-e-Tayyaba (LeT). The organisation was allegedly involved in 2016 attack in a cafe in Bangladesh’s capital city Dhaka. Earlier there were reports that the outfit was planning to set up within 10 km along Bangladesh border in several districts of West Bengal, Assam and Tripura.

In a statement, Home Ministry conveys, the JMB and its associates are trying to dismantle the democratically elected govts in Bangladesh and India only to establish Sharia law in these two neighboring countries.

Various sources confirm that many Islamic seminaries are involved in teaching Jihadi Terrorism obviously in West Bengal and Bangladesh.

One comment on “Jamaat-ul-Mujahideen Bangladesh using some Madrasas in WB for Jihadi radicalization: MHA.”