Think what happened, if it was done by a Hindu IAS officer to practice a Sanatani faith healing in a Govt Hospital? 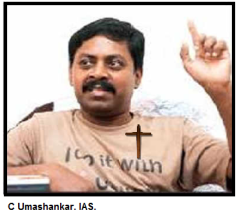 HJS Media | Chennai | March 11, 2020:: An IAS officer in Tamil Nadu named C Umashankar, who has been in news for several times because of his evangelical activities at work, had to be rescued by police from the patient ward of the Rajiv Gandhi General Government Hospital (RGGGH) in Chennai after the attendants of a patient showed a strong disagreement against his ‘faith healing’ activities.

As per the report of Daily Thanthi, The trouble started when Umashankar and his team went to Ward number 46 and tried to preach Christianity to some patients. The relative of a kidney patient of Hindu faith was enraged by this and called in his associates who gathered there and objected to religious activities inside hospital wards. They called the police seeking action against the preaching IAS officer.

After the police intervention, Umashankar allegedly showed his government identity when a sub-inspector asked him why he is forcing the ‘faith-healing’ activities on patients despite their objection.

Reportedly, Umashankar said that it was to comfort the patient and ‘provide solace’. He also claimed that they had got the oral permission to reach out to patients. He said, “As we were comforting, there were a few who rejected it. There were some patients without attendants, whom we comforted. We prayed for them and offered biscuits. But on Sunday, a person created ruckus and called the police to arrest us. I intervened and asked under what provision action can be taken against us. Article 19 and 25 of the Constitution grants a fundamental right for a person to freely practice and propagate religion.”

Umashankar was previously suspended as a poll observer in Madhya Pradesh after reports of his ‘faith-healing’ activities emerged. He was posed on electoral duty at the Sidhi constituency in the state. The State Election Commission had repeatedly warned him against conducting such activities but Umashankar was determined to do so.

In 2015, the Tamil Nadu government restricted him from preaching and propagating religion over concerns of communal tensions after he was reported to be participating in the ‘anti-homosexuality’ campaign run by ‘Tamil Nadu Christian Progressive Federation’, a quasi-socio-political fundamentalist outfit not much well known outside Kanyakumari district.

The bureaucrat also posts his religious preaching and faith healing videos on a Youtube channel known as Day of Lord Jesus.

Hindu interlocutor and Hindu Existence Web editor condemned the misconduct of the errant IAS Officer and twitted, “Think, if it was done by a Hindu IAS officer to practice a Sanatani faith healing in a Govt Hospital? See how Cops rescue preaching Christian IAS official from angry Hindu attendants at RGGGH“.