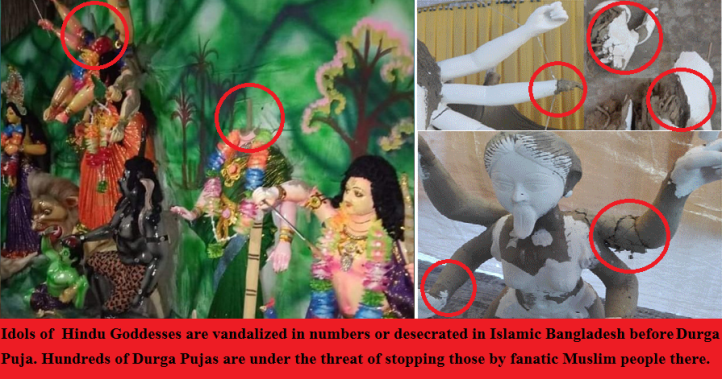 Idols are vandalized in Boalmari and Araihazar before the start of Durga Puja in Islamic Bangladesh.

Surabhi  Samaddar | HENB | Dhaka | Oct 23, 2020:: Just before a of commencement of  Durga Puja, idols were vandalized at Boalmari in Faridpur and Araihazar in Narayanganj. Police have arrested two Muslim youth on suspicion of involvement in the incident of iconoclasm. Both the incidents occurred on Tuesday night (Oct 20th, 2020).

Boalmari police in charge confirmed the incident on Wednesday afternoon. The cop in charge, Aminur Rahman said that after receiving the news, the police raided Ramdia that night and arrested Mohammad Nayan Sheikh (18)- son of Gaus Sheikh  and Mohammad Raju Mridha (25)- son of Halim Mridha, residents of the same village, on suspicion of being involved in the vandalism. Mrinal Karmakar, general secretary of the puja committee, has filed a case in this regard.

Meanwhile, unidentified persons vandalized the Durga idol of Gaur Nitai Akhra Durga Mandap at Araihazar in Narayanganj. The incident has caused panic among the Hindu community in the area.

Five days autumnal Durga Puja is considered as the biggest festival of the Bengali Hindu community in West Bengal , Bangladesh and anywhere they stay.

Earlier, and under preparation Goddess Kali idol was vandalized in the house of Nripen Malo in the night of 19th October by Jihadi people. However, so far no one has been arrested by the police in this incident.

Durga Puja idols were also vandalised in Patuakhali+ district of Islamic Bangladesh early in this month..

Araihazar Police Station OC Nazrul Islam said police was on investigation for the incident. Those involved will be brought under the law quickly. In the evening, the police held an emergency meeting with the leaders of all the puja mandapas.

Under the provocation of the fundamental Islamic clerics and Jihadi organizations, the Durga Puja Committees in Bangladesh have been facing troubles to observe the Pujas so far. Threats are coming to stop Durgapuja in Public even in the capital of Bangladesh. 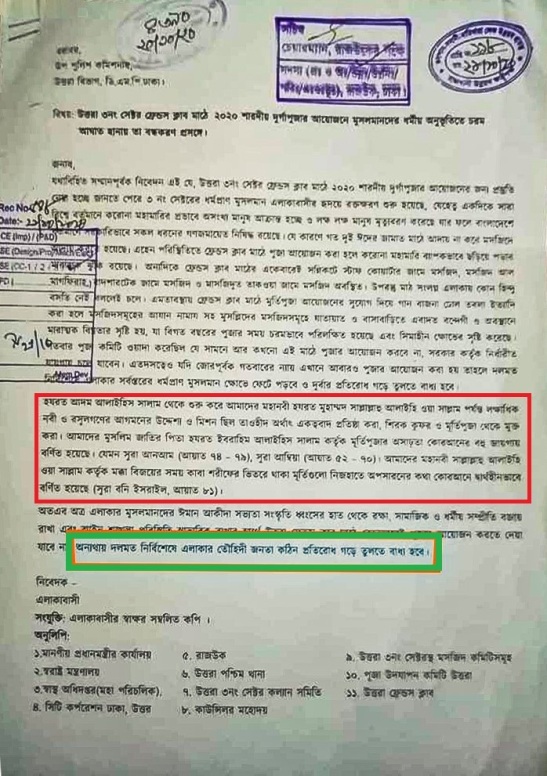 The united Jihadi forces have given threat to stop the Puja of Uttara Friends Club  in capitals Uttara area in written to the administrative and police authorities including various political parties. The Sharia loving people  have given the reference of Quran as there should be permission of idol worship in any Islamic state like Bangladesh.

Many of Durga Pujas in Islamic Bangladesh have been stopped or otherwise idols were vandalized there this year and the news could never find the light of truth that minority Hindus in Bangladesh are barely deprived of their religious rights.

Hindu interlocutor and Hindu Existence Website editor, Upananda Brahmachari took this persecution on BD minority Hindus as high concern and tweeted this matter+ Indian PM Narendra Modi and Union External Affairs Minister Dr Jaishankar to intervene into the matter to stop attacks on the festivals of minority Hindus in Bangladesh.