Madhya Pradesh to get separate cabinet committee for Cow protection. 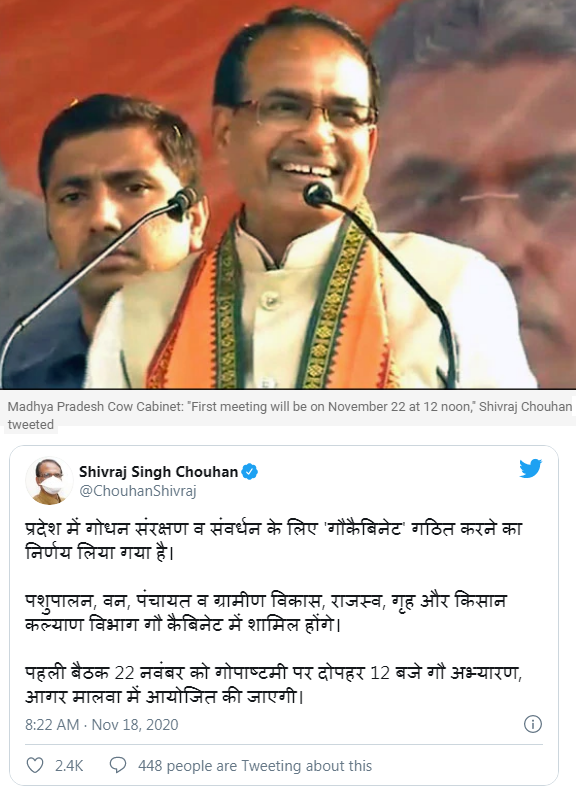 First meeting on November 22 at 12 noon on Gopashtami at Gau Sanctuary, Agar Malwa. 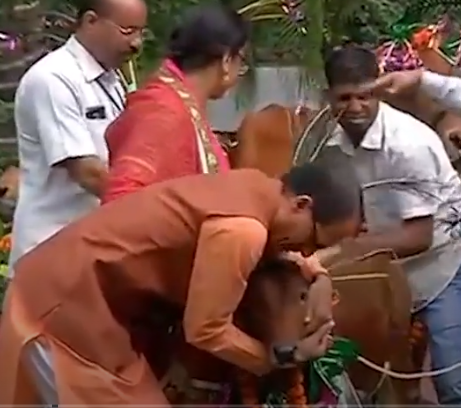 Upendra Bharti | HENB | Bhopal | Nov 18, 2020::  Madhya Pradesh Chief Minister Shivraj Singh Chouhan on Wednesday announced that the state government has decided to form a ”Cow Cabinet” for the protection of cows in the state.

“It has been decided to set up a “Cow Cabinet” for the protection and promotion of cows in the state. Animal Husbandry, Forest, Panchayat and Rural Development, Revenue, Home and Farmers Welfare Department will be a part of the “Cow Cabinet”. The first meeting will be held on November 22 at 12 noon on Gopashtami at Gau Sanctuary, Agar Malwa,” the Chief Minister said in a tweet.

In September 2017, the Bharatiya Janata Party (BJP)-led Madhya Pradesh government set up the India’s first cow sanctuary+ as Kamdhenu Gau Abhyaranya (sanctuary) in Agar Malwa, 190km northwest of Bhopal. MP Gau Samvardhan Board made it by spending about Rs 32 crore. The sanctuary, which is spread across 472 hectares, was later privatised due to financial crises, as reported.

Earlier this year, the Congress Govt in MP had allocated Rs 11 crore or Rs 1.60 only per day for feeding over 180,000 cows in government-run shelters in the state. It had slashed the allocation of the animal husbandry department to Rs 11 crore from Rs 132 crore in the previous financial year, a cut of 90%, show budget records, in the budget for 2020-21 financial year.

“A steep cut from the Rs 20 per day, per cow, given earlier. Not only this, the first of its kind scheme of inviting people for donation for cow protection has led to a collection of only Rs 22,000 so far and has proved to be a flop show,” a Madhya Pradesh government official, who asked not to be named, had said in August.

The officer cited above had said that after the failure of the scheme and the reduction in budget, the animal husbandry department, which has been given target to construct 7,000 new cow shelters, has been left in a lurch.

“The department’s one-month budget requirement for cow protection, which includes running of shelters, procuring cow feed, maintenance of biogas plants and vermicompost and other expenses, amount to Rs 11.5 crore, but this year the government allocated the total budget of Rs 11.80 crore. With this budget, even if we stopped all other work except providing cow feed, we have just Rs 600 per year to feed a cow in the shelters, which house 1.80 lakh cows,” said another officer who was also not willing to be named.

“In the absence of the budget, we are taking the help of NGOs and gram panchayats to run more than 1,300 cow shelters in Madhya Pradesh. The department is facing a budget shortage and we have requested an additional budget of Rs 129 crore from the state government and are hopeful that will get it,” RK Rokde, director of the animal husbandry department, said.