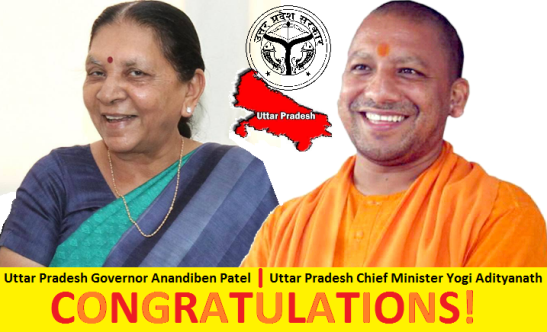 The law prohibits conversion from one religion to another by “misrepresentation, force, fraud, undue influence, coercion, allurement or marriage” including using false name of Hindus hiding an actual Muslim name!

Central Govt should consider such Ordinance in the line of UP to stop Love Jihad menace.

Upendra Bharti | HENB | Lucknow | Nov 28, 2020::  All the Hindutvawadis who were struggling for a legal measure against the menace of Love Jihad and its fatal consequences  on the Hindu girls, are obviously in a mood of thanks-giving to the BJP led Yogi Govt in Uttar Pradesh.

Uttar Pradesh Governor Anandiben Patel Saturday gave her assent to an Ordinance promulgated by the state government against forcible or “dishonest” religious conversions.

Uttar Pradesh Chief Minister Yogi Adityanath hinted a strong measure against the Love Jihad menace in a meeting after Nikita Tomar, a college student  was murdered by a Love Jihadi outside her college+ in Haryana’s Ballabgarh on  26 October 2020.

The Uttar Pradesh Cabinet had cleared the Ordinance earlier this week to check “unlawful religious conversions” and “inter-faith marriages with the sole intention of changing a girl’s religion.

According to the law, a marriage will be declared “shunya” (null and void) if the “sole intention” was to “change a girl’s religion”.

“Those getting the conversion done in violation of the provisions of the proposed law would have to face jail term of up to 10 years,” the government said in a statement. If it is found that the conversion is done “forcibly, through atrocity or cheating”, the offence will be non-bailable.

BJP-ruled states of Haryana and Madhya Pradesh have also sought to bring a law to check what they call “love jihad”. Last week, at least five Opposition-ruled states condemned the move as an encroachment on personal liberty, and an attempt to create a communal divide in the country.

In a communication, International Hindu interlocutor and Hindu Existence Website Editor, Upananda Brahmachari conveyed to HENB, “Those think,  UP government’s ordinance on inter-faith marriage is a trespass on fundamental freedoms, they are clearly on their hidden agenda to support Love Jihad. The nation must congratulate Yogi Govt for its strong resolution against Love Jihad. This, Uttar Pradesh Prohibition of Unlawful Conversion of Religious Ordinance, 2020 is unique for its features and in a first of this kind.”

The Union Govt should now think over an ordinance in the line of Uttar Pradesh to stop the menace of Love Jihad.

One comment on “UP Governor Okays Law Against Forced Conversions Amid “Love Jihad” Row.”