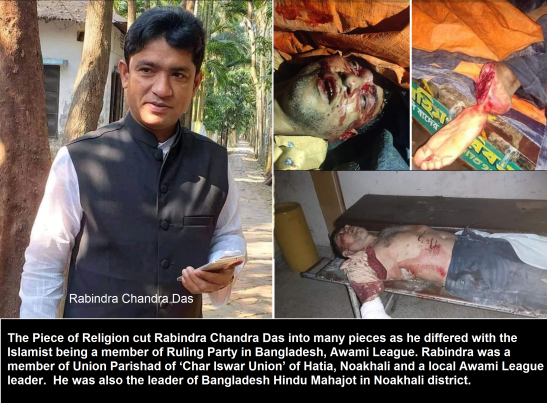 Hindu UP member of Awami League shot and hacked to death in Noakhali’s Hatia by Islamists of Bangladesh.

Ujjwal Dasgupta | HENB | Dhaka | June 10, 2021:: Islamist assailants hacked a Union Parishad (UP) member to death in Hatia upazila of Noakhali in the early hours of Thursday.

The deceased Rabindra Chandra Das, in his forties, was the member of Ward 3 of Char Ishwar Union Parishad, according to media reports.

He was the vice president of Hatia upazila unit Awami Swechchhasebak League and a member of the working committee of the upazila unit Awami League. Rabindra Chandra Das was also the leader of Bangladesh Hindu Mahajot (Bangaldesh Grand Hindu Alliance) in Noakhali district.

The victim was vying for the same post in the upcoming UP polls scheduled to be held on June 21 and was protesting the Islamists taking taxes from the  minority Hindus on many occasions.

Das was returning to his house at Oskhali in Sadar upazila from Banglabazar under Char Ishwar union with his fellows on three motorbikes, said Hatia police station OC Md Abul Khayer.

According to local sources, a group of assailants attacked Rabindra Chandra when he was returning home on a motorcycle with Upazila Sramik League President Al Amin around 2am. Al Amin, who was riding on the back of the motorcycle, managed to run away but the attackers managed to catch Rabindra.

Later, they shot him and later hacked him indiscriminately, leaving dead on the spot.

On information, a team of police recovered Rabindra’s body.

The eyewitness, Al Amin, claimed that as soon as they reached near Chairman Azad’s home, his son Omi, nephew Sohail, and few others opened fire targeting their motorcycle.

Police rushed him to the Hatia Upazila Health Complex where he succumbed to injuries, said the police officer.

The Islamic torture on minorities in Bangladesh is all time high but suppressed anyway in which the Hindus are miserably persecuted all along with evilest brutality.