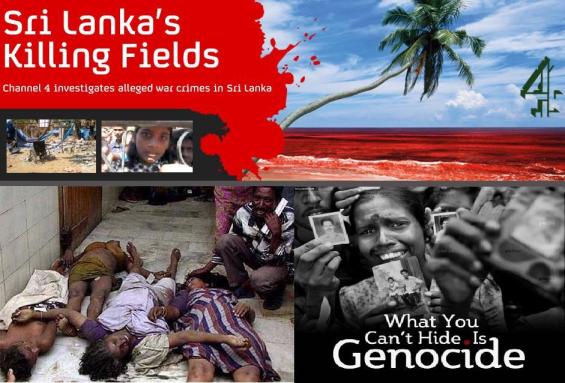 OF THIS TAMIL GENOCIDE IN SRILANKA, CLEARLY 90% ARE HINDUS… THIS IS  DEADLIEST GENOCIDE OF HINDUS IN THE RECENT TIMES…..

Screened at the UN in Geneva and New York and also shown to politicians at the House of Commons, the European Parliament and key figures in the US Senate, Sri Lanka’s Killing Fields prompted comment from leading political figures around the world, including Prime Minister David Cameron. Yet these war crimes still have yet to be properly investigated or those responsible brought to account – despite UN sources suggesting the Sri Lankan government forces killed up to 40 thousand civilians – perhaps many more in this period.

This powerful follow-up film, also presented by Jon Snow, presents damning new video evidence of war crimes including contemporaneous documents, eye-witness accounts, photographic stills and videos relating to how exactly events unfolded during the final days of the civil war. It investigates who was responsible – the results point to the highest levels of the Sri Lankan government and complicity at the top of the army.

Sri Lanka’s Killing Fields: War Crimes Unpunished forensically examines four specific cases and investigates who was responsible. The cases are: the deliberate heavy shelling of civilians and a hospital in the ‘No Fire Zone’; the strategic denial of food and medicine to hundreds and thousands of trapped civilians – defying the legal obligation to allow humanitarian aid into a war zone; the killing of civilians during the ‘rescue mission’ and the systematic execution of naked and bound LTTE prisoners – featuring new chilling video footage of a 12-year-old boy who has been brutally executed.

Despite pressure from human rights groups and the report by a UN-appointed panel of experts which called for a thorough international investigation into alleged violations of international humanitarian and human rights law, the Sri Lankan government’s internal inquiry, ‘The Lessons Learnt and Reconciliation Commission’ published in December last year, failed to conduct any kind of rigorous investigation into the allegations of war crimes. It specifically denied that any civilians were knowingly targeted with heavy artillery. Sri Lanka’s Killing Fields: War Crimes Unpunished explores the reasons behind the apparent international inaction at the time, in calling the government of Sri Lanka to account.

Sri Lanka’s Killing Fields: War Crimes Unpunished presents shocking new video footage and evidence of war crimes and crimes against humanity which trace ultimate responsibility up the highest echelons of the chain of command. This film asks questions of those who still hold the reins of power in Sri Lanka – President Rajapaksa, commander in chief and his brother Defence Secretary Gotabaya Rajapaska – and two former army chiefs who have landed prime diplomatic posts since the war ended and immunity from prosecution.

With the England cricket team set to tour Sri Lanka once again this month and Sri Lanka now confirmed as the venue for the next commonwealth heads of government meeting in 2013, this film is a stark reminder of the terrible suffering of a people who have been failed and forgotten by the international community.

Warning: This content contains disturbing and distressing descriptions and film of executions, atrocities and the shelling of civilians.

In 2011 Channel 4 exposed damning evidence of atrocities committed in the war in Sri Lanka. Jon Snow presents this powerful follow-up film, revealing new video evidence as well as contemporaneous documents, eye-witness accounts, photographic stills and videos relating to how exactly events unfolded during the final days of the civil war.

Programme available internationally as well as in the UK and Ireland.

Jon Snow presents a forensic investigation into the final weeks of the quarter-century-long civil war between the government of Sri Lanka and the secessionist rebels, the Tamil Tigers.

With disturbing and distressing descriptions and film of executions, atrocities and the shelling of civilians the programme features devastating new video evidence of war crimes – some of the most horrific footage Channel 4 has ever broadcast.

Programme available internationally as well as in the UK and Ireland.

Related Links to know more of the Sri Lankan Tamil Killing Field with the silent support of GOI….

Even though diffusing, deviating and hijacking the need to address the crux of the crisis in Sri Lanka, the US-tabled resolution at the UNHRC and the associated diplomatic deliberations and muscle-flexing seem to be artfully fixing the onus on India, in lines with the long legacy of Indo-US competition ruining the aspirations of genocide-affected Eezham Tamils. India could seize the opportunity and could come out with alternative righteous options to counter the trap, but the guilty-filled Congress regime is incapable of them. As New Delhi’s stand has been repeatedly proved an impediment to justice in the island and at the same time New Delhi is also not doing anything on its own other than shopping there, the question comes whether removal of the Congress regime is a prerequisite to India’s progress in the region and in world affairs, writes TamilNet political commentator in Colombo. Read more…..

Conference on International Protection of Human Rights in the 21st Century – Case Study on Sri Lanka organized by Center for War Victims and Human Rights was held on Feb 21, 2012 at Pearson Conference Center, Toronto, Canada.

Bracing the cold weather academics, lawyers, activists, MPs, and the public filled the conference center to capacity. The conference began with the speech from CWVHR president Anton Philip who outlined the history and development of human rights instruments such as Universal Declaration of Human Rights, United Nations Convention Against Torture and International Covenant on Economic, Social and Cultural Rights.

The panel speaker Ms. Deridre McConnell from Tamil Centre for Human Rights (London, UK) explained the historical, political and social conditions that resulted in the genocide of Tamils in Sri Lanka. She showed that the conditions Tamil face in Sri Lanka is worse than apartheid in South Africa.

Danilo Reyes program officer from Asian Human Rights Commission (Hong Kong) spoke on the topic of “Accountability in constitutionally entrenched impunity”. He explored whether is it possible to find accountability in a country where violations find impunity from the constitution.   He urged that this has to be combated and addressed if we are to make any progress with respect to accountability in Sri Lanka.

War Without Witness in Sri Lanka

It has now come to light that the Rajapakse regime criminals with the white van who were for the first time caught by the people and handed over to the Wellampitiya police comprised two Captains, a Lieutenant and a Corporal. These criminals associated with the raging white van murder syndrome had been freed from the police custody unlawfully and taken away by Western zone seiner DIG Anura Senanayake who had arrived at the police station early morning at about 4.40 yesterday. Anything of this most lawless Idi Amin style operation had not been recorded in the police registers. read more…

Photograph of the body of Balachandran Prabhakaran the 12 year old son of guerilla leader Velupillai Prabhakaran. He was captured with his bodyguards on 18 May 2009, the final day of battle. The five men were trussed and blindfolded, and shot while the boy watched. He was then neatly executed, a final few bullets pumped into him as he lay on the ground. read more…

4 comments on “TAMIL GENOCIDE IN SRI LANKA, CLEARLY 90% ARE HINDUS….”