NRI Hindus rally against Jihad in India at Indian Consulate in New York. “SAVE INDIA FROM ISLAM”. 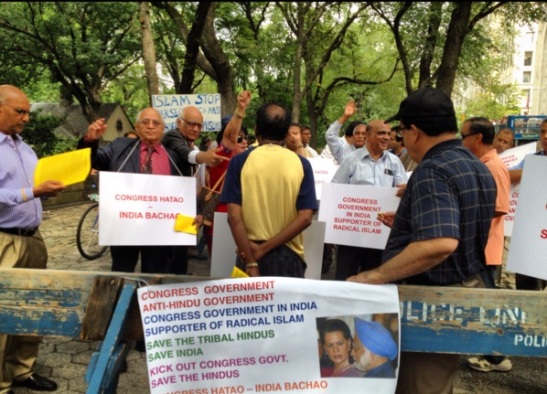 INDIAN HINDU RALLY AGAINST JIHAD AT INDIAN CONSULATE AT NEW YORK: “SAVE INDIA FROM ISLAM“. 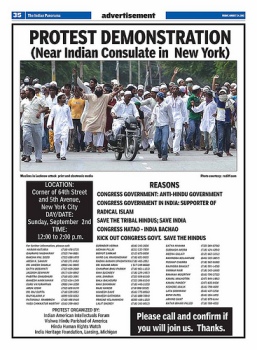 atlasshrugs2000.typepad.com||  Sunday, September 02, 2012 :: To the deafening chants of “Save India from Islam,” the Indian Hindu people gathered today on 5th Avenue by the Indian consulate in New York City to protest the relentless jihad against the free and brave nation.

India has long suffered at the hands of jihadists. At least 80 million Hindus have been slaughtered in jihadi wars. Centuries of persecution, oppression, genocide.

The history of India is teeming with Muslim monsters such as Timur the Terrible, who paraphrased the Koran: “‘O prophet, make war against the infidels and treat them severely.’ My great object in invading Hindustan (India) had been to wage a religious war against the infidelHindus.” And he did. Hundreds of thousands of Hindus were beheaded and towers made of their skulls. The warrior Babur was particularly fond of raising higher and higher towers of Hindu heads that the Muslims had cut off during and after every battle. He loved to sit in his royal tent and watch this spectacle. On one such occasion, the ground flowed with so much blood “and became so filled with quivering carcasses that his tent had to be moved thrice to a higher level.” (That’s from The Koran and the Kafir, by A. Ghosh.) He only missed the “merit” ofdemolishing temples and breaking symbols and images because his predecessor Firuz Tughlak hardly left any for him in the territories he traversed.

The war against the infidel in India is monstrous, unremitting, and constant to the present day. From Mumbai to Kashmir, all over India north and south, the jihad rages..(more here.)

MEMORANDUM TO THE PRIME MINISTER OF INDIA

Dear Prime Minister Singh:
The socio-political, religious and militant expansionist turbulence well within the boundaries of the country, with the participation of the transnational radical Islam, which is seemingly shaking the foundations of India, has given millions of Indo-Americans, their organizations and friends of India a serious cause for concern about the solidarity and integrity of India. The partisan policy of the establishment framed under the influence of the “politics of vote banks” has seemingly turned the situation all the more precarious. Progressively the country seems to be drifting in to the demographic, administrative and environmental chaos that existed during the dreadful days of partition in 1947.
…………………………..
Sd/-
Dr. Jagan Kaul, Prof. of International Law (Rtd.) and former Consultant to United Nationas Environmental Program; and Narain Kataria, President of IAIF on behalf of:
Indian American Intellectuals Forum
Vishwa Hindu Parishad of America
Hindu Human Rights Watch
Human Rights Coalition Against Radical Islam
India Heritage Foundation, Lansing, Michigan
Panun Kashmir International
Read full text of the Memorandum.

Save Assam – Save India. Say No – Sharia Law. 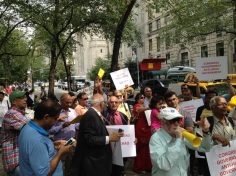 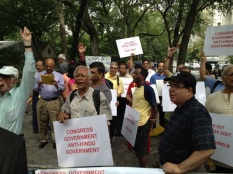 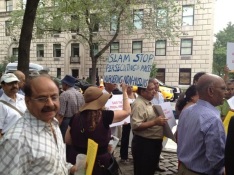 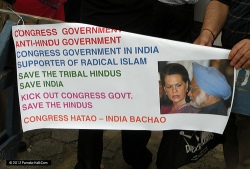 4 comments on “NRI Hindus rally against Jihad in India at Indian Consulate in New York. “SAVE INDIA FROM ISLAM”.”