Tamil Hindus in Sri Lanka are still in danger. Why Buddhists of SL are attacking Tamils and destroying Hindu Temples? 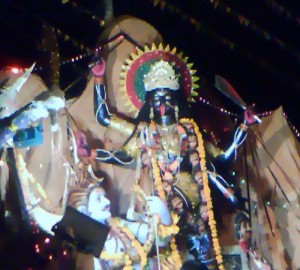 Issuing a statement he says; “It’s with deep shock & sorrow I record here that the Dambulla Badhrakaali Amman Kovil (Temple) has been demolished yesterday  razed to the grounds ,which raises question about the safety of Badhra kaali amman temples in the southern Sri Lanka. I was shocked to hear when my good friend Hon Parliamentarian R .Yogarajan conveyed the sad news. We both in our own individual  capacity appealed to His Excellency the President Mahinda Rajapaksa him to act immediately to stop a 30 year old kovil in Dambulla being shifted.

We both in our individual capacity  appealed to His Excellency for the safety of this temple right from the beginning  of a buddhists’ chauvnistic  group started attack on this temple and moors mosque in the city of Dambulle, Dr.N Kumar Guruparan said.

He said; “It’s only a couple of days back I appealed to the President, through English media and Hon Yogarajan took up this matter to the notice of the Preident ‘that President need to take steps to safeguard the Badhrakaali Amman Kovil  in Dambulla. If things are going out of hands in spite of our appeal are we to find alternatives to appeal and bring pressure hence bring this to the notice of the High Commission of India now after the complete demolition by the civvies forces.

Unfortunate is that according to the trustee ‘Lechhumi ammah’ it was government forces went along in civvies with the well known Buddhist monk requested them to remove the temple from the historically in habited tamil area immediately  if not to face the consequences but trustees requested time till Wednesday for the religious rites to take place to close down the temple. without waiting they have demolished.Now fores have embarked on building  a fountain ammah’s relation told  me  in the evening now; Statue of the deity is lying in  the trustees residence. There is a group of Buddhist fundamentalists eager to change the history of Tamils and Hindus’ in Dambulla to bring down the  prominent life pan of history demolishing the temples and non Buddhist shrines in prominent palace.This issue and deliberate attack on Badrakaali amman temple is still continuing, the deity’s statue was smashed and thrown in to the well not even a month back. Guruparan said the trident in the premises had been used to remove the roofing.”

Tamil Net added: Buddhist monks assisted by SL military in civil, claiming that a Saiva temple in Dambulla is situated on the ‘sacred grounds’ of Buddha Boomi (Buddhist soil) demolished the Paththirakaa’li Amman Koayil Tuesday night, without allowing the temple management to even conduct the rituals for the closure of the temple and relocate the idols of deities inside the temple. The controversial demolition has taken place at the place where Buddhist extremists targeted a 50-year-old mosque for destruction last year, provoking the Muslims in the entire island. Dambulla, situated in the Matale District of Central Province, is a junction of major highways that link Jaffna, Trincomalee, Colombo and Kandy. Colombo – Trincomalee and Jaffna – Kandy highways cut at Dumbulla.

On behalf of the Ka’li temple management, one of its trustees K. Luxmy had requested a few days of extended time to conclude the rituals and relocate the temple deities. But, the demolition was timed one day before the rituals were to commence, the management further said.

A so-called Urban ‘Development’ scheme of the Sri Lankan Defence Ministry, which is led by SL presidential sibling and Defense Secretary Gotabhaya Rajapaksa, has been introduced in the area together with the Buddha Boomi project of the extremist Buddhist monks.

Sometime back, ‘unidentified persons’ had destroyed the idol of the main deity, Kaa’li Amman, and the temple management placed a new idol.

Even though the Tamil residents were relocated from the area a few months ago, the temple was functioning with regular poojas.

The Hindu Maha Sabha, which condemned the demolition, in a statement issued on Wednesday questioned the credibility of the talk of ‘reconciliation’. The destruction of the temple reminded the brutal attacks against temples during the times of the Portuguese who were the first European colonialists to occupy the Jaffna and Kotte kingdoms in the island 400 years ago from Hindu kings.

Objections raised against removal of statue from Dambulla Kovil.

2 comments on “Tamil Hindus in Sri Lanka are still in danger. Why Buddhists of SL are attacking Tamils and destroying Hindu Temples?”