Rama Roy | Hindu Existence Bureau | Bangalore | 15 January 2014:: Alleged faith-healer (read fraud-healer) American evangelist Benny Hinn has compelled to cancel his visit to Bangalore amidst a strong protests by right wing Hindu groups, who were all against Hinn holding his mission in the city, alleging that the evangelist’s “hidden agenda” was only to convert people to Christianity through his fraudulent activities.

Hinn was to take part in a religious programme of ‘faith healing’ organised by a church named ‘Bethel Assembly of God Church’ from January 15 to 19 at Jakkur Airfield in Bangalore, Karnataka.

The Hindu Janajagruti Samiti office-bearers had recently submitted a memorandum to City Police Commissioner Raghavendra Auradkar contending that the convention is illegal as Hinn was arriving on a tourist visa.

“A tourist visiting India with a ‘tourist visa’ cannot indulge himself in any religious or political propaganda which the people of land cannot like. All such Christians coming to India (also don’t forget the Imams from Bangladesh, Pakistan or Arab countries) in the name of tourist purpose and doing any subversive or contrary to the people’s faith must be jailed without any hesitation”, as told online by Sri Upananda Brahmachari, the Chairman of Hindu Existence Forum to this reporter.

Praveen Bhai Togadia, the International President of Vishwa Hindu Parishad and RSS cadres were also opposed to his visit.

Stating hat they do not want gullible people to be lured by him former Minister of Karnataka, BJP’s Suresh Kumar had questioned Chief Minister Siddaramaiah’s “silence” over Hinn’s visit, especially when he had, in his capacity as the Deputy Chief Minister of the Congress-JDS government, opposed the self-proclaimed healer in 2005 when a huge crowd had gathered to witness Hinn’s Miracle Crusade in the same city. But, after proving Hinn’s miracles were all fraud, people unleashed to rampage on the organizers then.

Hindu groups in of Karnataka, still a Hindu majority state in India, of which Bangalore is the capital, had been gathering in protests since last weeks to demand that lawmakers keep Benny Hinn from attending the Christian Prayer Conference being hosted by the local Bethel Assembly of God Church. The faith-healer was vehemently opposed by Hindu activists for allegedly “coming to Karnataka with a hidden agenda of converting Hindus to Christianity,” referencing Hinn’s 2005 visit to the region that saw a mass turnout.

During his 2005 visit for the “Festival of Blessings, “10,000 law enforcement officials were deployed at the Jakkur airfield where the crusade was held. Though biblical crusade was never held against Hindus, the World Christian Agencies are ready now a days for a Conversion Crusade in India with 100 billion dollars.

On  10th January, the Karnataka High Court had directed the police to take precautionary measures for maintaining peace in the city during Hinn’s visit.

A Division Bench, comprising Chief Justice D H Waghela and Justice B V Nagarathna, had issued directions disposing of a petition by right wing group Sri Rama Sene’s city unit questioning police alleged inaction on its representation to restrain Hinn from participating in the religious event as a similar congregation in 2005 had “disturbed peace” in the city.

According to The Hindu, a group of intellectuals and like-minded groups had also protested against Hinn’s visit, calling him a ‘fraudster’ who was coming to India with the aim of spreading blind faith. Hinn’s propagation of biblical faith is nothing but a violation of all logical concepts  and modern scientific standards.

Christian groups are very active in India to convert 10 million Hindus per year in the faith of Christianity and they are getting a full support of Congress and UPA (United Progressive Forum, the ruling alliance in Center), whose chairperson is Sonia Antonia Maino, a very active believer for conversion under evangelic mission.

Hindu Groups are now ready in several regions to crush such Christian conspiracy including a nefarious design of Johnny Lever, Nagma and some other suspicious name-sake Hindus engaged a big conversion mission named Power To Change India. This groups are mainly active in Mumbai, Hyderabad and Chennai. 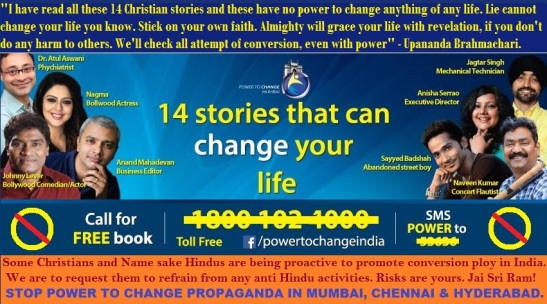 VHP and other Hindu organisations have taken the matter seriously to send all these things in a hinder box.

“If they don’t stop these advertisements (involving crores of rupees) immediately, we will hold Maha Aarti and Havans in front of their residents”, told Rane. Sri Rane alleged that both Nagma and Johnny Lever were corroborating with Christian Missionaries and trying proselytize the Hindus. All such persons propagating Christianity through a ‘Conversion Mission’ mode will not be spared anyway, Rane opined to Hindu Existence Media Bureau.

He says, a booklet with 14 stories depicts both the actors with some Christian crooks as calming that their lives changed for the better ater becoming Christians. “If they don’t stop this ploy, we will teach them a lesson in VHP-style” Rane adds.