The General Election 2014 & The Hindu Agenda.

The General Election 2014 in India and the Hindu Agenda. 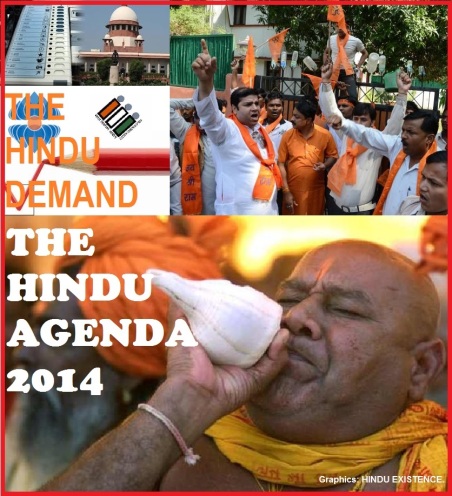 New Delhi | Hindu Existence Bureau | 19 March 2014:: Misguided and diverting Hindus in India.  Rather, we are seeing a dying and depraved Hindus in the sphere of election scenario as handled by so many persons and components, all ego centric and quite erratic bearing Hindus names.

If you go to any Muslim Mohall these days, you will only hear one serious discussion, the coming election, and the candidates of different parties to whom vote or not to vote. The choupals (market sitting places) not far away from a beef selling shop, the club rooms decorated with the pictures of Mecca and Madina, the Madrasha common rooms, the Friday congregation in the Mosques, the namaj punctual underworld and the labour class, the commuters in a journey wearing skull caps, the burka clad women or may not, resonates all the same voice. All Arabic name holders are seriously trying to shun all discords between them so that they can voice to pressurize unitedly upon the contesting candidates of different parties for furthering their own agenda apart from any agenda or manifesto of any political parties, whatever it may be.  The Muslim minorities in India have the goal in its election agenda to increase the numbers of radical and risk holder Muslim MPs (Member of Parliament) as to gain the power of the Muslim society to materialize its ambition of grabbing executive powers in India through a Political Jihad. This political design of Islamic agenda for any national election is meant for spreading Sharia, first inside the Muslim society and next to all others.  They are motivated enough by the leaders of Islamic parties, the prime Imams of the society, the influential clergies attached to Deoband school of thinking, and even the local Muslim leaders, propagators and the fundamental agents staying within all the parties.  Their unique march ahead is specific enough for their Islamic gain.

This has been possible after consecutive proclamations for Muslim interests by all Muslim political leaders as demanded by the Muslim society. And obviously these public demands are generally created by the political leaders of same faith or by the pseudo seculars who prefer to play Muslim vote bank politics. Mention or not, within this process of Islamization of Indian Politics (i.e. Political Jihad), Muslims have universalized their agenda encompassing more Muslim Person Law, Reconstruction of Babri Mosque,  cent percent implementation of Sacchar Committee,  more and more seat reservations in politics and employment ,  establishment of Islamic banking, banning of all Hindu religious programmes  in front of their eyesight, more and more cow slaughtering in front of Hindu sights, parallel Islamic system without any control of Indian administration, police and judiciary, freeing all the Mujahedeens kept in the jails, in a word:  unabated Islamic expansionism in India in all possible ways.  Some demands are straight, some are told deflected.

Believe me or not, all the political parties virtually accept all these demands mentioned above as per Islamic agenda to get the blessing of Muslim voters as an Indian tradition of Vote culture. Have you heard any voice of any Hindu political leader or other to deny all these unjust and unconstitutional claims of Muslims?

The lack of Hindu political will

In most of the cases the crying babies get mother’s milk.  But the shy Hindus even differ to claim anything for their Hindu well-being. Hindus think that they are so philanthropic that they cannot demand even their rights of existence. When Hindus demand something, they demand it personally, publicly, pretentiously or politically, but such claims are not connected with any Hindu interest. The demands made by them are so personal or political that damages the Hindu interest in a very gross way.

This terminology of ‘The Hindu Agenda’ may sound most communal and unfamiliar for the major Hindus.  In India, it has not been set prominent and important ever before by any Hindu religious groups or saints, or by any Hindu political leaders.  The concept of setting Hindu Agenda or Hindus Demands in Indian Politics is embarrassing enough. The political parties can put their agenda and claim their demands and so the Muslims, Christians and others.  But, Hindus cannot.

Hindu leaders lack political will on their own and eventually misled the Hindu mass from preparing a Hindu agenda or charter of demand before any election to avoid all dereliction for the Hindus as a trend of Indian politics.

As a matter of fact, the big Hindu organizations (RSS, VHP, Arya Samaj, Art of Living, just taking these names for example) and the star Hindu saints having crores of disciples (as they claim), unfortunately negotiate with the political parties for their own gain and not obviously for any majestic might or for the realistic development for the Hindu society through a new political revelation.

I respect Sri Ashok Singhal and Dr. Pravin Togadiya, the iconic Hindu leaders of Vishwa Hindu Parisad. But, where are these Hindu leaders to frame and place the Hindu demand and Hindu agenda before election to all the political parties without any prejudice.

I had also a long connection with Sangha Parivar. But, I have never seen any such Hindu demand or agenda to announce publically meaningful before any such election moments.  But heard many times to air that ‘Jo Hindu Hit me Kaam karega, wohi desh me raj karega’ (means who works for the Hindu interest will rule the country).

The concoction in the above phrase is beyond any measure.  VHP and RSS are doing all the works in the interest of Hindus. But, they are not ruling the country.  Again if we want to honor the phrasal ambit, that denotes that the ruling MPs in the Center are doing all the best for Hindu interest!  The VHP in such a way ridiculed themselves after hitting their own slogan.

The health of Sri Ashok Singhal is unwell due to his age. But, Dr Togadiya Ji is simply missing from his expected role to prepare Hindus for an election war or censored by Sangha to pass any remarks for such Hindu agenda or any demand as such. The embarrassment went limitless when a third year (final official training camp) trained Swayamsevak (RSS cadre)  all on a sudden offered apology to the Muslims of India for no reasons at all. Yes, I am telling about Sri Rajnath Singh, the present president of Bharatiya Janata Party.