As Narendra Modi prepares to take over, VHP presents to Modi Govt its wishlist including Sri Rama Temple at Ayodhya, ban on Cow slaughter and inclusion of holistic Bhartiya culture in the educational curriculum.

As Modi prepares to take over, VHP presents its wishlist. 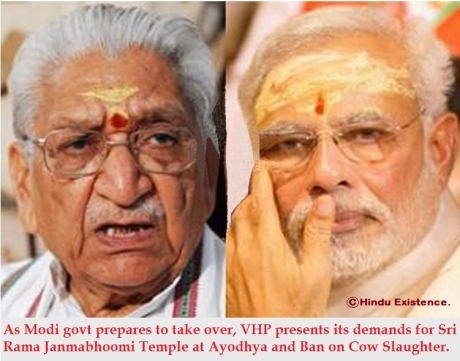 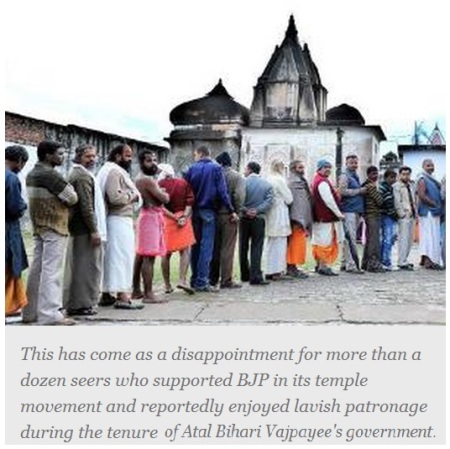 Arshad Afzal Khan | TNN | Ayodhya | May 25, 2014:: Sadhus and senior mahants who spearheaded the Ram temple movement seem to have been given a royal snub by the PMO as most of them have not been invited in the swearing-in ceremony of Narendra Modi. This has come as a disappointment for more than a dozen seers who supported BJP in its temple movement and reportedly enjoyed lavish patronage during the tenure of Atal Bihari Vajpayee’s government. President of Ram Janmabhoomi Nyas and a senior mentor of VHP and Ram temple movement Mahant Nritya Gopal Das, said: “It is very disheartening. Most of us have not been invited to Modi’s swearing-in ceremony.” Looking sad and crestfallen, Das did not express any further reaction over this “snub”. Karsevak Puram, the local headquarters of VHP in Ayodhya, looks deserted and no invitation from the PMO has been received here. “The place that was a centre of saffron politics and the favourite destination of BJP leaders from across the country during the temple movement has been completely ignored,” regional convener of VHP at Ayodhya Mahant Brij Mohan Das said. “We have received no invitation from the PMO for the swearing-in ceremony. We really don’t know what to say,” he added.

Ram Vilas Vedanti, a senior VHP leader, who has always been vocal about the Ram temple issue, has also not been invited. Talking to TOI, he said, “When Atal Bihari Vajpyee took the prime ministerial oath, senior sadhus from Ayodhya were invited there with full respect. I participated in Atalj’s swearing-in ceremony with a delegation of sadhus from Ayodhya, but this time we have been ignored. I don’t know why this is being done with us. It is very disappointing and sad.” Chief priest of Ram Janmabhoomi temple Acharya Satyendra Das, said, “They have invited a lot of people from Banaras but Ayodhya didn’t find any place in the list of the invitees. It is a sorrow that the city of Ram is being ignored.” Senior VHP leader and mahant of Dashrath Gaddi temple Mahant Brij Mohan Das said, “Ignoring Ayodhya is a blunder by the BJP. It has invited film stars, businessmen and even Nawaz Sharif. Why have they not invited any mahant or sadhu from the city of Ram?”  [Courtesy: TOI].