Islamabad | Agencies | 25 August 2014:: A historic Hindu temple in Pakistan`s garrison city of Rawalpindi is facing demolition to make way for barracks for soldiers, outraging the minority community in the country.

The pre-partition temple along with a Hindu graveyard and 53 single-room houses could be demolished as authorities are planning to construct barracks for soldiers.

Built in 1935, Maharishi Walmeck Sawami Jee Temple popularly known as Balaknash Temple is located at Gracy Lines of Chaklala, which falls in the municipal jurisdiction of military-managed Rawalpindi Cantonment Board.

The Hindu community was informed on August 12 that the temple and a Hindu graveyard will be demolished, following which a petition was filed against the move in a court, which stayed the planned demolition on Thursday.

The decision has caused anger among the Hindus as the temple is centre of religious activities of the small community in Rawalpindi, about 25 km from here.

A Hindu resident, Ashok Chand, told media that the temple and the houses were legally built before partition and there was no reason to demolish them.
“We refused to go to India and decided to stay in Jinnah`s Pakistan, now our homes and sacred temple are being bulldozed. Are not we Pakistanis or at least humans?” he said.

The local Hindus living there are being offered alternative accommodation but it is not yet clear whether a new temple will be built for them.

About 60 Hindu families live in Rawalpindi which had a thriving Hindu population before the partition.

The decision for demolishing the temple along with other 53 single room small houses to construct the barracks by the FWO has sent shock waves across the Hindu community. An administrative branch of the Pakistan Army, active duty officers, civilian scientists and engineers serve in the FWO. 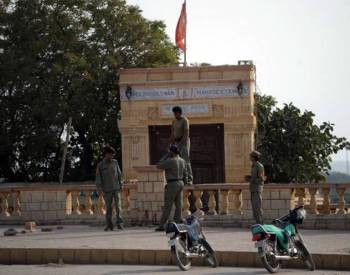 Pakistani local municipal workers stand in front of a Hindu temple near the construction site of an underpass in Karachi on March 24, 2014. FILE PIC/AFP.

According to reports, the demolition notices were issued on July 18 but the orders were served on August 12. What had further shocked the community is the demolition of graveyard of Hindus situated at a distance of one kilometre from the temple. Luxurious bungalows are likely to come up on the 6.5 kanals of land.

When contacted, an FWO officer refused to comment on the matter. During a visit to the site, this correspondent saw construction of washrooms for labourers was under way. The bungalows meant for Army officers were also under construction less than a hundred yards away.

Anti-Hindu sentiments run high in Rawalpindi. Recently, unidentified men had attacked the people assembled at a ceremony held in the temple to mark ‘Janamashtami’. Luckily, no one was hurt seriously. Incidentally, the temple was attacked in 1992 following demolition of the Babri mosque in India. Later, the Pakistan government had reconstructed the temple. Since then, 50 Hindu families were living in the temple neighborhood.

“We are living in Pakistan from even before the Partition took place. But life isn’t smooth as it was before 1992,” Ranish Das said, adding that the authorities were forcing the families to shift to another place at the earliest. Another local, Javed Bhatti, confirmed the same. “Authorities of FWO have promised to build flats for us. They want us to hand our land to them. This is unacceptable to us,” Javed said. “Despite the fact that we refused to live in India and stayed here in Jinnah’s Pakistan, authorities want to demolish the temple… Is this fair?” Asfandyar Bhindara, a member of Lower House of Parliament, has moved a petition in a local court of Rawalpindi to stop the demolition. The court issued a stay order in this regard.

Cases of kidnappings and forced conversions are nothing new in Pakistan. As many as 400 Hindu families from Pakistan have migrated to India since 2011, while those left behind are said to have forcibly converted to Islam for escaping the wrath of extremists.

Hindus comprised nearly 15 per cent of the country’s population in 1947. Now, they are a mere two per cent. Of the 428 temples in the country, only 26 are functioning, said Jagmohan Kumar Arora, the community head in Rawalpindi. To make matters worse for the minorities, the cremation ground in Rawalpindi, used by Hindus and Sikhs was demolished on July 19, 2010.

Compiled from the reports of ABP Live & India Today.