Give birth 4 kids for good citizens and do not produce 40 puppies for making anti socials: Prachi Didi.

I just said to have 4 kids and not 40 puppies: Sadhvi Prachi

There was no Islam before 1400 years back. All were Hindus and  Azam Khan, Abid Raza, Toufiq Raza, Musharraf, Gilani, Fernandez, all are welcomed to come back in their original home. The doors of Hindus are wide open. Gharwapsi will continue until strong law against religious conversion is not made. 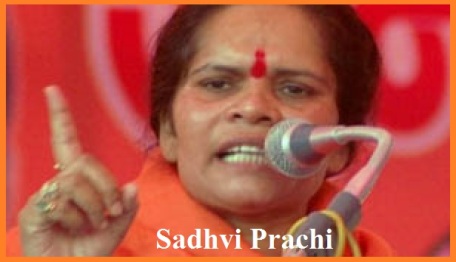 HENB | Badaun (UP) | 2 February 2015:: : A VHP leader and also a BJP face, Sadhvi Prachi has sparked off  fresh controversy by making straight remarks on the issue of ‘love jihad‘ and defending her earlier statement that Hindu women should have four children. Sadhvi was  speaking in a Hindu rally at Badaun district in Uttar Pradesh on Sunday.

Explaining her statement wherein she asked Hindu women to have at least 4 kids as right, she said that there was nothing wrong in it. Prachi said that she only said have 4 kids and not 35-40 puppies.

Sadhvi Prachi said that people who marry Hindu girls for money are spreading “Love Jihad” and should be stopped. Calling India a Hindu nation, she said that names like Tughlakh, Musharraf, Fernandez etc. were nowhere 1400 years back and that India was ‘Hindustan’. She added, ‘every body should respect the culture and tradition of the majority Hindus here whoever want to stay here peacefully. Confronting Hindus in every footsteps will be fatal consequences for all anti-Hindus in some days’.

Earlier, Sadhvi Prachi had backed party MP Sakshi Maharaj, raising the slogan of “hum do, humaare chaar” advocating that each Hindu family should have four children. “A lion doesn’t have just one child, we also need four children in each family. One will fight the enemies on the border, give one to saints, give another to VHP for social work,” Prachi had said.

Prachi had contested the 2012 Assembly elections on BJP ticket from Purkazi constituency in UP. She was among persons accused of inciting riots through their provocative speeches in Muzaffarnagar in 2013 and was later granted bail.

The latest hate speech came despite Prime Minister Narendra Modi’s warning to party leaders to restrain from making controversial comments which can overshadow his government’s agenda of development and economic reforms.

The BJP was quick to distance itself from Prachi’s remarks, saying the party does not agree with such views and is not interested in discussing any such issue.

A senior leader of Uttar Pradesh State BJP opined that Sadhvi expressed her own view from a dais which was not of BJP and Sadhvi’s personal view is not approved by the BJP anyway.

Prachi felicitated 20 persons, who had more than four children at the ‘Virat Hindu Sammelan’ organised by VHP on Sunday at Badaun. Those “honoured” included Dwarika Singh, who have 11 children, Rampal Singh and Surnam Singh, who have nine children each.

Addressing the gathering on the occasion, Sadhvi Prachi said, “Why family planning is implemented for Hindus only.”

On “Ghar Wapasi”, she said that if 1,400 years ago everyone was Hindu, “UP Urban Development Minister Azam Khan, Abid Raja, Toufiq Raja, Jama Masjid’s Imam Bukhari (called him as buffalo), former Pakistan President Pervez Musharraf and (Yusuf Raza) Gilani should also do come back to their original home of Hindu Dharama through ghar wapasi”. ‘Gharwapsi’ is a popular Hindi  a term is used for reconverting into Hinduism.

Sadhvi Prachi said that she was not against love but against “Love Jihad” and everybody in India must respect and adopt Indian Culture (Bhartiya Samskruti), not obviously the Arabic or Western culture. This female religious leader has her immense influence upon Hindus in Central and Western Uttar Pradesh. Sadvi (female saint) also says that Gharwapsi will continue until strong law against religious conversion is not made.

While HENB (Hindu Existence News Bureau) contacted Sadhvi Prachi, she clarified that she wanted to tell giving birth 4 kids to be good citizen and  not like 35-40 puppies for making anti socials.

(with input from ANI and Agencies)

One comment on “Give birth 4 kids for good citizens and do not produce 40 puppies for making anti socials: Prachi Didi.”