HENB | Udupi | March 10, 2015:: The land of Krishna once again became place of inspiration for Vishwa Hindu Parishad karyakarta’s as huge gathering turned out to witness mega Hindu Samajotsav at MGM Grounds in Udupi on Monday evening.

VHP Chief Dr Pravin Togadia supposed to address the Hindu Samajotsav, but Udupi district administration had imposed a week long ban on him from entering Udupi.

Tens of thousands of people gathered at MGM grounds here on Sunday March 9 to witness the Virat Hindu Samajotsava organized by VHP as part of its golden jubilee celebrations.

Addressing the gathering, Hartalkar took a dig at the state government and chief minister Siddaramaiah over the ban on Togadia and said, “I am thankful to the district president of VHP Suprasad Shetty for giving me this opportunity, but more than that, I should thank the chief minister of Karnataka, as Dr Pravinbhai Togadia was supposed to come, but now I have got the opportunity in his place. May god give him (CM) some sense.

“You cannot change people’s beliefs with swords, politics and schemes. The CM should have at least come and witnessed this immense faith here and respected it,” Prashant Hartalkar said.

Referring to the Congress party, he said, “You are not there in the entire country, you are left only in Karnataka, so at least you should manage yourself here. You have lost your heart and mind. You have become pauper.

“Doctor (Pravin Togadia) was supposed to come here but unfortunately the compounder has come,” he quipped.

Praising Udupi for its religious sanctity, he said, “VHP began in Udupi, so without taking the name of Udupi my speech is incomplete. VHP has completed 50 years and it has guaranteed the safety of Hindus across the world. No Hindu is lonely – all Hindus in the world are one and united. This awareness has been created by VHP throughout the world. This organization is scientifically built with the blessings of saints and true ideology.”

Stressing on the need to preserve Hindu religion and traditions, he said, “About 250 years ago, several Hindus were taken to other countries as slaves. They were without families and money, still they went from being zeroes to heroes. They recited bhajans and Hanuman Chalisa every evening and that practice is still alive in those countries. Even today Ramayana is told in Bali in their language. The PM of Mauritius is a Hindu. It is because we preserved our culture and tradition, and because keertanas and bhajans were recited in our childhoods, the practice continues even today.”

Lauding the VHP further, he said, “VHP is well organized and there is no problem on any front. Many reformers came to this world but they could not succeed in their mission because there was a necessity of organizaion, but VHP has done that with team work from the past 50 years.

“When I went to Pakistan where there are 27 lac Hindus, I saw that the Hindus there have no right to cremate the dead according to Hindu faith. Some do it secretly with fear. Here (in India) Muslims are demanding various facilities and complaining that they did not get this and that, but it is painful to see the condition of the Hindus in Pakistan. When there is right of cremation in the entire world, Pakistan has not given this right to Hindus there. Where can those Hindus go? They are looking at us because we are their elder brothers,” he said.

“When I was in Bangladesh for 16 days, I saw 148 temples being destroyed and Hindus being raped and murdered. Where they will go and who will be responsible for them? We, the Hindus of Bharat, are responsible for them. Let us morally support them. We have to prove our capability and face reality. Nothing will come from mere shouting. The entire Hindu community of the world has expectations from us,” he said.

“When there was economic crisis in America, the entire Europe was shaken but India did not feel its impact. It is because of our culture, because of our ladies who manage household banking. Indian culture is strongly rooted, it begins from family. When a good Hindu comes from a good family, our culture will be protected. We should think about this. We should not become orthodox but progressive Hindus,” he exhorted.

“Conversion, corruption, terrorism, cow slaughter and untouchability are five evils to this nation”.

“Minorities should raise voice against conversion and terrorism”: Pejawar Swamiji 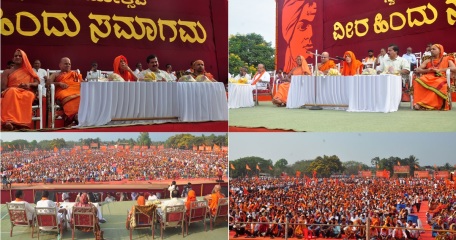 Sri Vishweshateertha Swamji of Pejawar Math termed the Virat Hindu Samajotsava as ‘Vishwa Roopa Darshana’ in Udupi and said, “We are not against anyone nor are we communal. But we are believers in love.”

“VHP is protecting the culture of this nation and the sanatana dharma. Minorities need not fear, no one will face injustice. Conversion and terrorist actvities should stop and minorities should raise their voice against these issues. When this happens, there will be peace and harmony in society. When conversion takes place, there will also be reconversion, and this is what leads to conflict. You are free to follow your faith but do not interfere in other’s faiths. “There should be no attempt to convert anyone, and minority communities need to speak out against this. Peace and harmony can be maintained if there is no conversion and terrorist activities. Minority leaders should guide their communities in the right path and give them good message. We should all make efforts to build a peaceful society,” he said.

Citing an example from the Ramayana, he said, “Youth should be like Ram and Laxman and fight against terrorism and conversion, which have caused problems to the entire nation.

On the issue of cow slaughter, he said, “See the presence of ‘Gau Mata’ in humans and agriculture. It gives milk from birth to death. The Karnataka government should ban cow slaughter as done in Maharashtra.”

He also gave call to end untouchability and said, “The society should become free from untouchability. It is insult to Hindu Samaj – there is no such practice in any other faith.”

He concluded by declaring, “Conversion, corruption, terrorism, cow slaughter and untouchability are evils to this nation and we should all join hands to abolish them.”

‘Karnataka CM fears losing his chair, he is supporting PFI’ 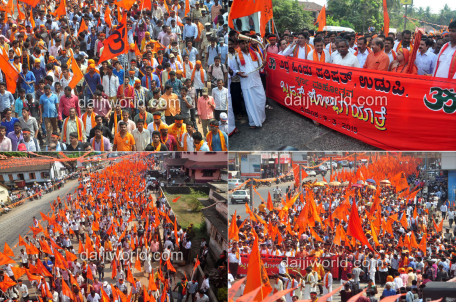 Organizing secretary of VHP south province Gopalji said, “We are celebrating 50 years of VHP and already in 18 places, about 3,000 to one lac people have gathered for each of the Hindu Samajotsavas. Out of the 18, Dr Pravin Togadia has addressed eight Samajotsavas, but every programme was held peacefully. But from February 8, his programmes have been banned because the CM fears losing his chair.”

He also criticized Dr Vishal, the DC of Udupi for imposing the ban on Togadia and said, “I have met Dr Vishal, and know him from the Yadgir incident. He is anti-Ram and narrow-minded. The state government gave permission to the rally of PFI whose activists cheered for Pakistan and allowed them to go up till 7 pm, but they want Hindu Samajotsava to end by 5.30 pm. Why is the CM supporting PFI?

“In VHP there are several Togadias. VHP does not exist because of only Togadia’s name – it is in the hearts of youth, and no one can stop the VHP wave – neither the CM nor his mother (Sonia Gandhi). VHP has created awareness among Hindus. It is great community that has worked for the development of humanity and treats the entire world as family. Hindus never invaded holding swords in one hand and the holy book in other, or by offering service. We love the entire world.”

Speaking on conversion issue, he said, “Muslims converted forcibly and Christians in the name of service. Conversion should be stopped or there should be law against conversion, if not Ghar Wapsi will continue.

“Ours is a great community which has provided education to women. But elsewhere, girls are shot when they go to school – is this culture or perversion of culture? If such girls want to come to Hindu religion, be ready to welcome them. Hindu population will not decline, this is era of Hindu development.

“Among Muslims, some women feel that they cannot be inside burkha any longer. No girl wants to hide her face. Such Muslim girls feel that if they marry a Hindu, they will have their husband lifelong (as against polygamy).

“Christians converted Hindus by luring them with service. People are talking of the service offered by Christians but there also Hindu Maths which provide free education without converting anyone. Hence we are not ready to accept the service of Mother Teresa. VHP is providing education in the name of Ekal Vidyalaya to 20 lac students in rural areas.”

He also warned the Hindus against love Jihad and asked them to be ‘careful’, and declared that Ram Mandir will be built and some day Pakistan will be rejoined to India.

Chairman of Alva’s Education Foundation Dr Mohan Alva said, “Culture, values and patriotism have been given to us by our forefathers. Everyone should look into our past and contemplate on this. As per our expectastions, the country has got a leader like Narenda Modi. PM Modi is our dream come true.”

He also spoke on terrorism and said, “Our country has shattered because of terrorism. Is it wrong to say that terrorism is wrong?”

On the issue of conversion he said, “I have seen conversion. As I am running educational institutions I have adopted many children but never converted any student, but I have seen children from Manipur and Siddhi and Koraga communities getting converted and coming here. Is it wrong to ask that conversion should stop?”

“There is a global challenge today. Culture and folk traditions are being twisted. Only truth should be taught in schools,” he said.