‘Art of Living’ gets ISIS threats in Malaysia to stop Yoga as infidel’s culture.

HENB | Kuala Lumpur | March 28, 2015::  To curb the increasing influence of Indian Yoga and spirituality in the global sphere including some section of Muslims, the  Islamic terror organisations are giving threats to various organisations attached with Yoga propagation. In this row, the Malaysian chapter of Sri Sri Ravi Shankar’s Art of Living has received threatening letters from the Islamic State (IS) terror group, a close aide of the spiritual leader claimed on Saturday.

“Sri Sri Ravi Shankar is touring some countries in the far east and he landed in Malaysia on Friday. A few days ago while he was in Cambodia, we received threat letters from ISIS. One was received by the hotel manager, one by the director of Art of Living and one by senior faculty. The content of the letter is very threatening saying if you go ahead with the programme there will be consequences,” said Nakul Dhawan, an aide of Ravi Shankar.

According to reports, the terror group has in a letter to the manager of Jen Hotel, where the spiritual guru is staying, warned that the hotel would be destroyed.

“The authorities have immediately notified the local authorities. We also contacted the Indian Embassy and we also conducted an investigation to find the source of the letter. We are going ahead,” he said.

Malaysia is also affected radical Islam and believed to have a base of ISIS in Selangor and it its Muslim majority areas. As of 2010 Census the population of Malaysian state Selangor has 57.9% Muslim, 24.4% Buddhist, 11.6% Hindu, 3.8% Christian, 0.5% Taoist or Chinese religion adherent, 1.4% follower of other religions, and 0.4% non-religious. This state is controlled by hereditary constitutional monarchy, of which the reigning Sultan (since 2001) is Sultan Sharafuddin Idris Shah. Since 23 September 2014, the Menteri Besar (chief executive of the state government) is YAB Mohamed Azmin Ali, of the People’s Justice Party (PKR) portion of Pakatan Rakyat. Muslim fundamentalists get an advantage in the state for bullying over Hindu, Buddhist and yoga practitioners in these days. 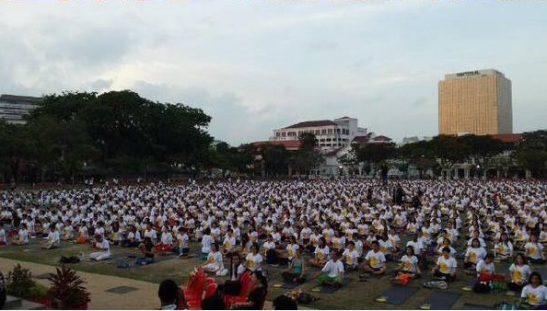 For holding this Yoga camp at Penang in Malaysia, the ISIS sent threat letter to AOL. 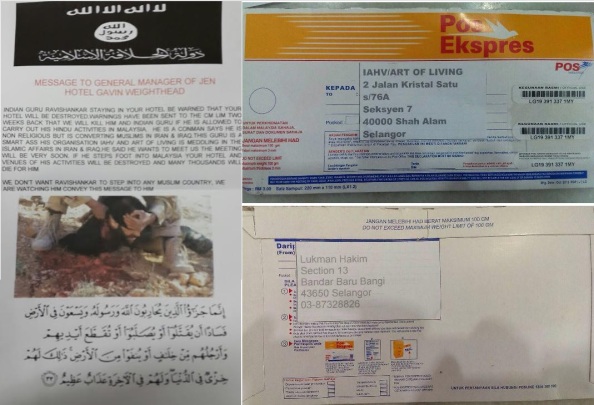 ISIS like radical and terror organizations following Quran are opposing the practice of yoga which eliminates frustrations and  negative elements in human mind including all excesses and fundamentalism. Recently UN declared June 21 as International Day of Yoga  at the behest of Indian Prime Minister Shri Narendra Modi.

____with the input from PTI and ANI. Courtesy: Pics and links used above.

7 comments on “‘Art of Living’ gets ISIS threats in Malaysia to stop Yoga as infidel’s culture.”