Hindu servitor hacked to death near a Bangladesh monastery by suspected Islamic militants.

Atul Brahmachari | HENB | Dhaka | June 11, 2016::  A Hindu monastery worker has been hacked to death in Bangladesh, police said, the latest in a string of attacks on secular and minority targets.

Second Hindu murder victim in Bangladesh during this Ramadan

Nityaranjan Pande (62 years), died on the spot after several people attacked him early near the monastery on Friday around 5.30 am, Agency news said citing police.

Pande is the victim of First Friday of Ramadan in Bangladesh and second in this series as IS linked Jihadis hacked another Hindu priest  in Jhenaidah on last Tuesday.

Pande has been working as a servitor at Himayaetpur Satsanga Ashram of Thakur Anukul Chandra order for last forty years.

His murder comes after the body of a Hindu priest was found with his head nearly severed (graphics inside) in a paddy field in Jhinaidah district  on Tuesday.

Most of the attacks have been blamed on, or claimed by, Islamist militants linked with JMB, an Islamic State operative in Bangladesh . The present killing has also been organised by the same Jihadi style of IS linked militants.

“There was no eye-witness to the attack as it happened very early in the morning,” the head of police in the north-western district of Pabna, Alamgir Kabir, conveyed to media from Pabna. 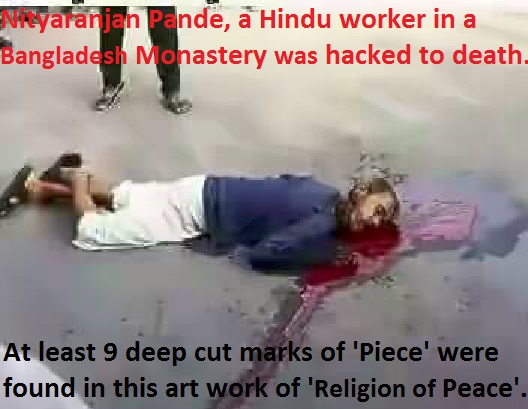 Mr Pande, who was attacked during his morning walk, had been working at the monastery for 40 years, officials said.

The ashram’s General Secretary Jugol Kishore Ghosh said Pandey hailed actually from Gopalganj. “He has been serving here for the last 40 years. He went for a morning walk every day as he had diabetes.”

Police and RAB officials cordoned off the crime scene after arriving there. But they could not say anything else regarding the assailants and their motives.

Local NGO worker Naresh Madhu said: “He (Pandey) lived here for a long time. He became one of us. He was a simple man who had no enemies.”

He suspected that Islamic militants were behind Pandey’s murder as clear from the Jihadi style of slaughtering upon neck.

The attack happened very close to the monastery.

Bangladesh has a majority Muslim population with Hindu’s making up about 8% of the population. who are put under severe Islamic persecution since the inception of Independent Bangladesh, came in its existence from East Pakistan.

Bangladesh adopted Islam as State Religion on 1988 under a military regime of the then President Lieutenant General Hussain Muhammad Ershad. Recently, Bangladesh Supreme Court also upheld ‘Islam as the State Religion’ there.

Bangladesh is now under the spate of various radical forces under Islamic doctrines and the country faced a Hindu Genocide in 1971 at the time of Bangladesh liberation war.

This is the second killing of Hindus in Bangladesh during this Ramadan time.

__Agencies. / Courtesy: The links used above.

One comment on “Hindu servitor hacked to death near a Bangladesh monastery by suspected Islamic militants.”