Many Communal Clashes in WB during Muharram. 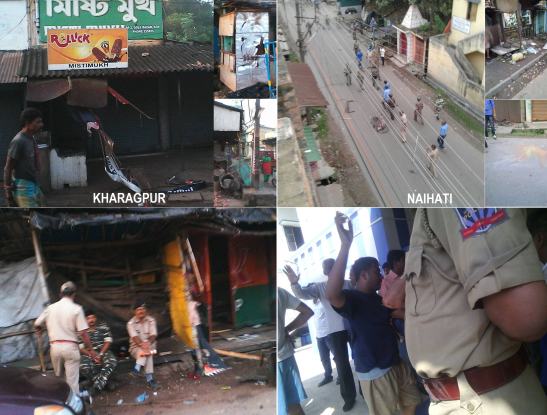 Islamic vandalism in West Bengal during Muharram, attack on Durga Puja Pandal and Immersion in many places by the Ashura participants. WB Govt fails to protect Hindus. Center must interfere.

Rohit was killed in Jihadi attack in Kharagpur in Sept last at the same spot where the present Jihadi attacks occurred during Muharram.

S Pandey  and R Debnath | HENB | Kharagpur and Barrackpore | Oct 13, 2016 (updated on 15th Oct):: Sporadic communal violence erupted in West Bengal  during Muharram and in Durga puja and its immersion processions as reported.

On 12th October, 2016 the occasion of Muharram and the next day of Dusshera from 9 pm – 12 pm at Golebazar in Kharagpur town,  the Muslims who were carrying out procession of Taziya from nearby Masjid did continuous bomb blasts, arson, loot and set fire to over 50 places including Hindu shops, Mandirs, bikes, houses, etc causing much damage.

According to source reports 3 people were stabbed grievously.

Offices & Shops remain closed in a large part of the town fearing escalation of violence and imposition of curfew. After failure of police to contain the destruction, RAF has been deployed.

Recently, at same place on 18th September, 2016 at 8.30 PM in main Golebazar market of the Railway Town and in front of the Golebazar Masjid a 18 year old Dalit Hindu boy Rohit was murdered by 5-6 Muslim youths on a minor incident of slight collision of his bike with another bike rode by some of the assassins.

Then for about 3 days all shops and offices had remained closed in Golebazar. After involvement of administration and assurance from them, the market place had become normal.

In Nahati Hazinagar area communal clashes broke out when a blast occurred within a Taziya procession. Jehadi Muslims attacked Hindu houses and shops and vandalized rampantly. In the first phase of Jihadi action, the police contingents were also found stranded. A large contingent of police went the disturbed area to maintain the law and order situation at stake.

Many such communal clashes are unreported and WB State Govt is ignoring the Jihadi attacks  upon Hindus during festivals of Hindus and Muslims conflicts  each other. For this blatant Muslim appeasement by the state of West Bengal the Govt of India must interfere to protect the religious rights of Hindus in West Bengal.

Of late it is also reported in Chapdani and Chandannagore, the Hindus ultimately thrashed the Muslims as a retaliation and stopped some Muharram processions through Hindu areas.

On 15th Oct, the Hindus and Muslims clashed each other at Marwarikal (colony) of Hazinagar (Naihati) over a Taziya procession where Hindu wrath could not be found complacent as they were thrashed earlier by the Jihadis of the locality.

10 comments on “Many Communal Clashes in WB during Muharram.”