We must unite to fight against religious persecution on Russian Hindus. 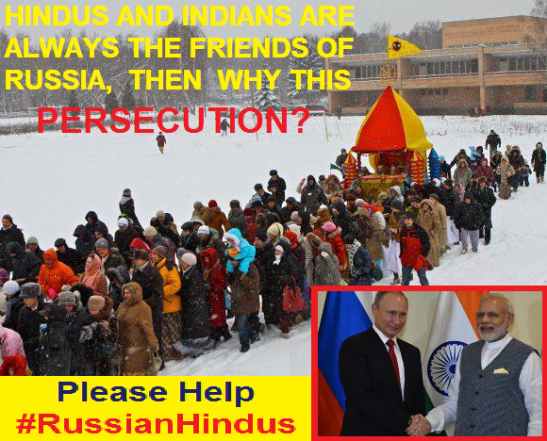 Over 14,000 signature in online petition against religious persecution perpetrated by Orthodox Christians in Russia.

Rama Roy | HENB | New Delhi | Jan 19, 2017:: In an online petition in the Change Org, Hindu activist  Sri Prasun Prakash of Moscow, Russia has drawn the global attention on the matter of unabated religious persecution upon the Russian Hindus.

In the petition (Hindus in Russia seek safety from persecution by radical elements+ Plz click here and sign), Prakash pointed out the Christian menace describing that “a few radical elements, led by one, Mr. Alexander Dvorkin, who claims to be a researcher of modern sectarianism, church historian and Orthodox theologian, started hounding ” on Prakash and his family in Moscow due to their religious faith on Hinduism.

Prakash wanted to crave the attentions of Russian President Mr. Vladimir Putin and Indian Prime Minister Sri Narendra Modi, and the Ministers of Foreign Affairs of both countries, Mr. Sergey Lavrov and Mrs. Sushma Swaraj among others for an immediate redressal for the unfortunate happenings.

The petition on Change.org initiated less than two weeks ago tobring together the Hindu community in Russia and unite them to speak up against religious persecution, negative publicity and criminally motivated attacks by some radical elements, has garnered immense support with over 14,000 people signing up to express their solidarity with the Hindus in Russia.

Sri Prasun Prakash, the initiator of this petition and the Director of Public Communications and Cultural Development at the Centre for Promotion of Conservation and Development of Indian Culture “Shri Prakash Dham” in Moscow, Russia, said, “We’re overwhelmed with the support that has been pouring in from all quarters including the Indian media. We’re hopeful that our campaign will unite the Russian Hindus and enable them to resist the few radical elements who wish to subjugate the minority Hindu community in Russia to their nefarious plans. We humbly implore the Russian President Mr. Vladimir Putin, to kindly reflect on the issue and help reign in these rogue elements. We’re sick of them spreading lies about Hinduism as a religion through print, electronic and online media, and targeting us for our religious beliefs and customs. All that we aim for is to be left in peace.”

Mr. Prakash’s online petition has been covered prominently by over 40 Indian newspapers including the Times of India, the most widely circulated daily newspaper in India. The Online Petition also trended on leading social media platform, Twitter, on Jan 11, 2017, with thousands of people from India and Russia tweeting messages in support of the family of Mr. Prasun Prakash, singled out by the radicals to showcase their hatred against Hindus in Russia.

Mr. Prasun Prakash has been fighting against the onslaught of misinformation and lies being spread against Hinduism by one Mr. Alexander Dvorkin, who has been regularly posting slanderous online messages against the minority Hindu community in Russia and hurting the feelings of its followers. He has been more specifically targeting Mr. Prakash’s family and his organisation, using them as a scapegoat in his evil plans. Seeing the viciousness of his messages and their growing intensity, Mr. Prakash initiated a lawsuit for libel against the online platform iriney.ru where Mr. Dvorkin primarily airs his repugnant views. Pursuant to this, a group of people were sent to terrorize and threaten Mr. Prakash and his family at their own residence, and false news reports were also broadcasted on TV channels against Mr. Prakash’s organisation, Shri Prakash Dham, and his father, Sri Prakash Ji. Mr. Prakash’s father, Shri Prakash Ji, has been living in Russia for more than 25 years and has done a lot for Hinduism, Yoga as a philosophy of life and Indian Culture in Russia. That is also one of the reasons, radical elements have chosen Mr. Prakash’s father as a target. They understand, that by doing this, it becomes easier to fight Hinduism as a religion.

“We have every reason to believe that Mr. Dvorkin is just a pawn in the hands of some very powerful and notorious people in Russia who wish to subjugate the minority Hindu community in the country. These rogue elements are using aggression to threaten us into withdrawing the libel lawsuit against Mr. Dvorkin, but we’re not giving in. While they do have the power and the money to play even dirtier tricks like producing paid witnesses for making false dispositions during the trial, and also engage in a false propaganda campaign to influence the judge presiding over the case, we continue to have full faith in the Russian Judicial System and sincerely believe that our rights will be safeguarded and justice would prevail,” Mr. Prakash added further.

While the next crucial hearing in the case is scheduled for January 19, 2017, Mr. Prakash feels that there is an urgent need for everyone to know about this important issue so that people like Mr. Dvorkin, and his masters and accomplices think twice before indulging in such activities against the minority Hindu community in Russia. Despite the dirty tactics that Mr. Dvorkin might deploy to influence the court and to threaten the supporters of the cause of Hindus in Russia, Mr. Prakash believes that it is important for the Indian, and the world media to know that the outcome of the case will mean a lot for the welfare of Hindus in Russia.

According to a 2010 religious census, there were only 140,000 Hindus in Russia, which account for a mere 0.1% population of the country. There have been several instances in the past wherein Hindus have been targeted by radical elements with hopes to marginalize what already is a minority population in the Russian Federation. In the past, the infamous Bhagavad Gita trial in Russia sparked public protests and legal actions in India against the proposed ban and drew harsh criticism from the intellectual community in Russia. Several leading Russian scholars publicly denounced the perpetuation of the trial. The scholars, during that time, appealed to the then President Dmitry Medvedev and Premier Vladimir Putin for intervention on grounds that the trial will have negative consequences for India-Russia relations and for Russia’s international reputation.

Mr. Prakash aims to carry forward his campaign with the conviction that when a country like India, having a majority population of Hindus, can safeguard Christianity and its followers, Russia can definitely offer the same to its minority Hindu population. He has requested all his friends, acquaintances and the general public, including anyone who could somehow influence the situation, to pay attention to the nefarious activities of Mr. Alexander Dvorkin, his masters, and his accomplices, as they are clearly against the premises of our modern civilized society and could also lead to the emergence of misunderstanding between Russia and India in future.

For further information, or to help Mr. Prakash in his mission, one can sign and share his petition with all of their friends at this URL: https://goo.gl/sj8nHl.

It is very unfortunate that the Hindus, specially in the ISKCON movement have been facing various offence, persecution, discrimination, confinement and encroachment in Russia, as perpetrated by several radical elements attached with the Communists and Christians both.

Hindus and Indians are always the friend of Russia. Indian PM Narendra Modi and Russian President Vladimir Putin are good Friends. Then why these series of persecution upon Hindus in Russia? This must be stopped. Stopped for ever.

Writer can be contacted at ramaroy.111@gmail.com

One comment on “We must unite to fight against religious persecution on Russian Hindus.”