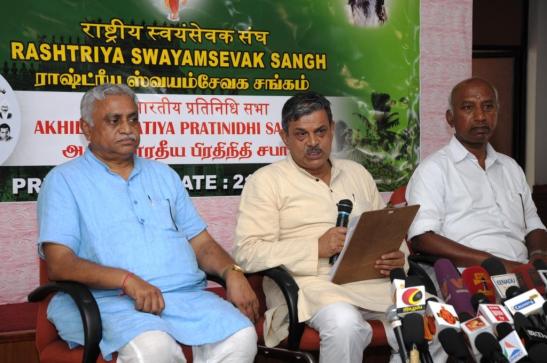 RSS concerned at ‘increase of Jihadi forces’ and ‘decline of Hindu population’ in West Bengal.

PTI | Coimbatore | March 21, 2017:: The RSS on Tuesday expressed concern over the ‘growing Jehadi activities’ and the ‘declining’ Hindu population in West Bengal and and urged the people to create awareness against the state government’s ‘communal politics.’ It also accused the Mamata Banerjee government of giving ‘encouragement’ to the anti-national elements due to its ‘Muslim vote bank politics.’ A resolution adopted at the three-day meeting of the Akhil Bharatiya Pratinidhi Sabha (ABPS), the RSS’ top policy making body, also condemned the extremist violence.

“This (decline in Hindu population in West Bengal) is a matter of serious concern to the unity and integrity of the country,” RSS Joint General Secretary Dattatreya Hosabale told reporters briefing about the deliberations at the meeting. The resolution said the ABPS strongly “condemns the violence by extremists and the Muslim appeasement policy of the state government and calls upon the countrymen to create awareness against the Jehadi violence and the communal politics of the state government.”

Hosabale said after partition, the Hindus from East Pakistan were forced to seek refuge in West Bengal. It was not surprising that due to such large influx, the Hindu population in the state, which constituted 78.45 per cent in 1951 had declined to 70.54 per cent as per the 2011 census, he said. The meeting also calls upon the state government to rise above “petty vote-bank politics” and discharge its constitutional obligations, he said.

Hosable urged the Centre to ensure firm action against the anti-national jehadi elements within the state in the interest of national security. Listing out several incidents of bomb blasts, arson, violence and “molestation of women” reported in West Bengal in the past few years, Hosabale said the worst sufferers of these atrocities on the Hindu society had been the members of Scheduled Castes. “The Hindus were subjected to a pre-planned attack resulting in horrid incidents of arson, looting and molestation of womenfolk at Dhulagadh on December 13 and 14, 2016,” he said.

“While on the one hand the state government is threatening to close down the schools which are instilling the spirit of patriotism, on the other hand it is turning a blind eye to thousands of institutions like the notorious Simulia Madrasas where Jehadi and fundamentalist training is being imparted,” Hosabale charged. On the RSS allegation of increasing attacks on Hindus in West Bengal and on the BJP workers in Kerala, Hosabale accused the state government of supporting jehadis in West Bengal.

Dubbing the situation in Kerala too as “worrisome,” he said that after LDF victory in the assembly elections, there had been sudden increase in the attacks on activists and organisations associated with the RSS. On the controversy of an RSS functionary offering Rs one crore for the head of Kerala Chief Minister Pinarayi Vijayan, RSS media relations in-charge Manmohan Vaidya said the person had realised his mistake and resigned from his post. “The RSS does not not support such activities,” Hosabale said.

On the plans to continue opposing Vijayan’s participation in various social and political functions, as in Hyderabad, he said the RSS has made the point and the CPI-M leaders will be ‘intelligent’ enough to read the “mood of the people.” To a question on the choice of a university as the venue for the ABPS meeting at a time when incidents of campus violence across the country was on the rise, he said this was not the first time that such a meeting was held in university campus of the country.

The ABPS meeting, held for the first time in Tamil Nadu, was organised at the Amrita University here. Hosabale also informed that Matha Amtithanandamayi, the University founder, visited the meeting hall and blessed the participants this morning. On selection of Tamil Nadu, particularly Coimbatore, as the venue for the meet, he said the RSS has grown in Tamil Nadu especially in its southern parts. “It will definitely grow further because of the programmes being organised and we are happy that the RSS is known across Tamil Nadu,” Hosabale said. Around 1,400 elected representatives and the heads of the RSS state units attended the meeting where activities of its various wings were discussed.