What they can do for two ‘hungry’ boys? 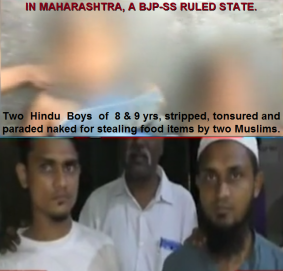 Upendra Bharti | HENB | Mumbai | May 22, 2017::  Two minor Hindu boys at Ulhasnagar in outer Mumbai were stripped naked, tonsured, garlanded with slippers and paraded in public Saturday allegedly by a Muslim shopkeeper and his sons and relatives, after the boys took snacks from his shop without permission, as alleged. The police have arrested the shopkeeper and his sons.  The two victim minor boys belong to poor Dalit Hindu families, as reported.

According to the local police, the incident took place around 9.30 pm on Saturday when the two boys, aged 8 and 9, were caught by Mehmood Pathan allegedly stealing a packet of chakli (a savoury snack) from his shop.

Pathan (69) and his sons Irfan (25) and Tawakkal (20) detained the boys and forcibly shaved their hair off, the police said.

The boys were then allegedly stripped naked by the men and made to wear a garland of slippers. “They were paraded in the area for several minutes while locals recorded them on their mobile phones. No one tried to help the boys,” said M G Waghmare, senior inspector, Hill Line police station, Ulhasnagar.

The boys, who live in the vicinity of the shop, were then allowed to go home. They told their parents about what had happened, and the mother of one of them lodged a police complaint around 10 pm.

“We arrested the men as soon as the complaint was received,” said Waghmare.

Shockingly, the incident took place in front of a crowd, but none came forward to stop them. Acting on a complaint by the mother of one of the boys, the Hill Line police in the suburb later arrested Mehmood Pathan (62), and his sons Irfan, 26, and Salim, 22. The trio was booked under Indian Penal Code sections 355 for assault, 500 for defamation and 323 for injury, and also under the Protection of Children from Sexual Offences Act. They were produced before a court in Kalyan on Sunday which remanded them to a day’s police custody till Monday.

It was all happened when the boys were playing near their home in Prem Nagar area in Ulhasnagar. They walked up to the neighbourhood sweet shop owned by Mehmood and may be ‘feeling hungry‘, took a packet of ‘chaklis’, a pretzel-like snack made of rice flour, and fled without giving any price as alleged.

Police said Mehmood who saw them shoplifting, asked his sons to teach them a lesson. Irfan and Salim caught both children and dragged them towards the shop. The duo shaved a part of their heads and then took their footwear and strung it around them. Finally they stripped the children naked and paraded them on the street.

Salim recorded the acts on his phone while Irfan slapped both several times. The clip went viral on social media.

Police said when the mother of one of the minors, who works as a domestic help in Ghatkopar, returned in the evening, she was shocked to see the child in such a state.

Along with the parent of the other child, who was initially reluctant to press charges, she filed a complaint.
…
__Agencies.