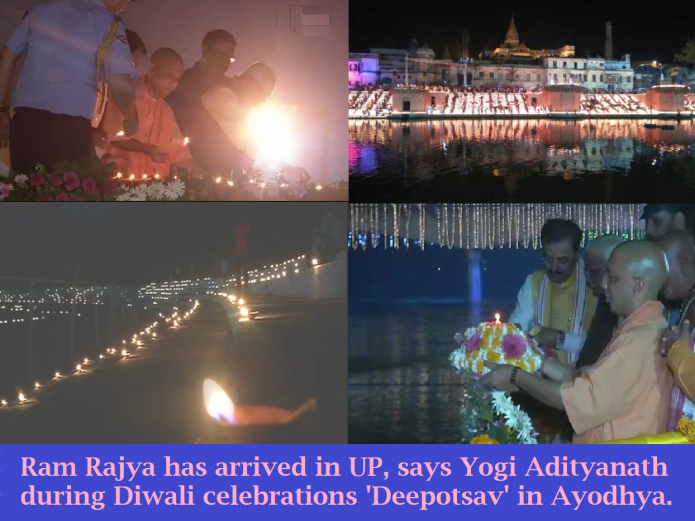 Express Web Desk | Ayodhya | Oct 18, 2017:: Inaugurating a glittering ‘Deepotsav’ celebration in Ayodhya, Uttar Pradesh Chief Minister Yogi Adityanath on Wednesday talked about Ram Rajya at length. Addressing a large gathering at the event, being hosted by the Tourism Department of the Uttar Pradesh government, Adityanath said Ayodhya gave the concept of Ram Rajya – where there is no pain or grief. He added “the real meaning of Ram Rajya is a home for all; electricity and LPG gas cylinders for every household”.

Seeking to deflect opposition criticism, Adityanath said that no politics should be seen behind his government’s efforts to develop this temple town which gave the idea of ‘Ram Rajya’ – where there is no poverty or discrimination.

The chief minister hit out at critics claiming that there were some who opposed and questioned his actions regardless of what he did. “There are some who are used to opposing everything we do. If I come to Ayodhya they raise questions and if I don’t they say I am afraid of coming here. Now they are saying that the Ayodhya programme is to divert the attention of people. I am here with my work, including loan waivers, wheat purchase etc, done in the past six months,” he said.

Beginning his speech with ‘Jai Shri Ram’ and ‘Bharat Mata Ki Jai’ slogans, he said Ayodhya has much to humanity. Adityanath also compared the Narendra Modi government’s work for the masses at the Centre with Ram Rajya. The chief minister wondered as to why there were negative discussions on Ayodhya. “We are making an attempt to take it from negativity to positivity. I am happy all Ayodhya residents cooperated in this endeavour. Ayodhya remained neglected, faced attacks continuously, but it will not remain so. We have launched Rs 133 crore schemes here,” he said.

Chants of “Jai Shri Ram” echoed on the banks of the Saryu river as actors portraying the roles of Lord Rama and Sita arrived on a chopper decked up to resemble the mythological Pushpak Viman – in a recreation of Lord Rama’s return from 14 years of exile to Ayodhya – as part of a grand ‘Deepotsav’ celebration.

Uttar Pradesh Governor Ram Naik and senior ministers were also in attendance for the event in the flower-bedecked and gaily lighted temple town on Wednesday evening. Tonnes of flower petals were showered as the actors portraying the characters from the Ramayana arrived at the venue of the Ram Lila. As part of the Deepotsav, a record 1.73 lakh diyas or earthern lamps will be lighted on the banks of the Saryu.

Adityanath has said the efforts by his government to “recreate the treta yug Diwali” was aimed to promote Ayodhya as a tourist draw, but opposition parties have alleged the BJP is trying to drum up support for its communal politics. “This is all being done with an eye on the Gujarat elections and the BJP leaders are trying to deflect the attention from its failure in UP,” a senior BSP leader said.

Talking to IANS, a Samajwadi Party leader said the past governments have been promoting Ayodhya as a tourist destination and the Adityanath government’s mega event was “merely to whitewash its failures”.

Senior Congress leader Alok Sharma said the event was being held with an eye on the Gujarat elections. “I hope the BJP also finds equal focus for the innocent infants who died in Gorakhpur due to shortage of oxygen,” he said.