Jihadis are getting shelters in West Bengal; taking Hindu names, Hindu help in a dangerous trend! Had a plan to kill bloggers of India in BD style!!

Three terrorists of Ansarullah Bangla Team with Al-Qaeda and IS links arrested in Kolkata. 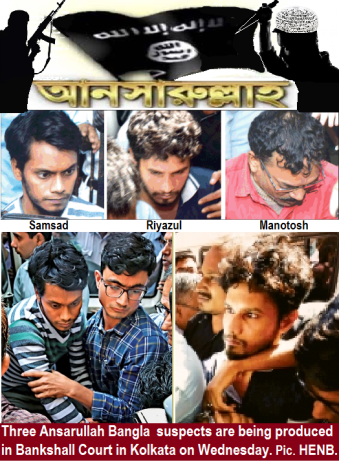 Upendra Bharti | HENB | Kolkata | Nov 23, 2017::  On the tip off from the central bureau of intelligence, the Special Task Force (STF) of Kolkata Police has arrested three suspected terrorists including two Bangladeshi nationals from Kolkata station on Tuesday.The arrested persons are members of Ansarullah Bangla Team (ABT), a banned terrorist organisation of Bangladesh, said Murli Dhar Shama, Deputy Commissioner of STF.

According to Sharma, three of them might have links with dreaded terrorist organisation Al-Qaeda. ABT is accused of killing several free-thinker bloggers in Bangladesh.

According to the STF official, the suspects were living at the outskirts of Kolkata and in some bordering districts for more than a year without a valid passport. All of them  procured fake Aadhaar card on their names. “We are probing into that part too. How they could register themselves with Adhaar roll when they do not have any valid identity document,” said Sharma.

The STF got the initial tip off from the central bureau of intelligence and worked on other information related to the group. The arrested trio includes Samsad Mia (26) alias Tanvir alias Tushar Biswas, Riyazul (25) alias Suman  and Manotosh Dey (46) alias Manada alias Ziarul Gazi. While Samsad and Riyazul are from Bangladesh, Manotosh in an Indian national and a resident of Basirhat in north 24 Paragana. It is revealed that Manotosh was giving his fake identity as Shyamal De or his actual identity of Ziarul Gazi.

Media revealed that Monotosh took a rented house some months back in Basirhat’s Kholapota area, saying he was a ex-army officer. Before that Monotosh used to stay in another rented house giving his identity as Shyamal De with his Hindu wife Gouri at Bhabanipur area under Basirhat PS. The mystery of Monotosh touched the reality when it was established that Monotosh has been staying at Raghunathpur-Dakhinpara as Ziarul Gazi for last eleven years under same Basirhat PS with his first Muslim wife Afroza Bibi, making his identity as a fish trader. Sources said that Ziarul alias Monotosh was an illegal cross border arms dealer for last 10 years.

It is believed that Samsad, a civil engineer and an explosive expert of ABT had his close connection with Major Zia who was the mastermind of the 2011 military coup in Bangladesh. Samsad met Zia in Afghanistan in 2016 and took the charge of ABT networking in India and started supply of explosive materials in Bangladesh from Kolkata. The monetary transactions for such supply of arms, ammunition and explosive were made through a Bank of Baroda a/c at Hyderabad Branch in the name of Samsad alias Tanvir. It is believed that some cloth merchants in India used to donate money to Samsad through Hawala under the direction of Mazor Zia now in Afghanistan. With the help of such donations Samsad completed several consignments to Bangladesh within last two years.

The team was camping here to procure arms, ammunition and explosives. It is also said that the suspects had the planning to kill some liberal and ‘anti-Muslim’ writers and bloggers in West Bengal and other parts of India. “We have recovered arms and explosives from them. they were carrying huge piles of documents with them. These documents include leaflets of Al-Qaeda, booklets explaining bomb making devices and methods to make bombs and so on. They were carrying some handwritten notes which have names of some important locations of Kolkata and some metropolitan cities in India. We have also seized visiting cards of many chemical shops here. They might have tried to buy chemicals, those are used to make explosives,” added the deputy commissioner.

ABT is an infamous group of terrorists which also wants to establish Islamic caliphate. The arrested youths are in their early twenties. “We need to probe deeper into their motives. We are yet to ascertain if they were given any assignment here or if they could connect to other people in this area. We had been tracking them for last one and half months,”said the official.

The unearthed WB module of Ansarullah Bangla has its connectivity in various Metropolises and big cities in India including Delhi, Kolkata, Bangalore, Pune, Belgaum and Hyderabad.

It is very much alarming that the Jihadis in many Islamic outfits including Ansarullah Bangla are networking their modules under Hindu guise to attack Indian Hindus and many bloggers in India are under their scanner.