VHP resolves to carry on ghar wapsi in large scale. 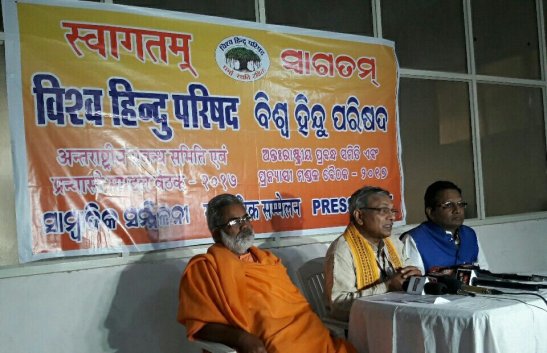 Dr Surendra Jain in the middle

Upendra Bharti | HENB | Bhubaneswar | Dec 28, 2017:: In the middle of Pranyasi Baithak (Global Trustee Body Meeting) of VHP in Bhubaneshwar, the Viswa Hindu Parishad said on Thursday that it would carry on its ghar wapsi campaign (reconversion of non-Hindus to Hinduism) more vigorously, alleging that gullible tribal people were being converted through deceptive tactics across the country.

“Christian missionaries are pumping in money for converting people, especially tribals. And tribals are on the verge of losing their ethnic and cultural identity owing to rampant conversion,” VHP joint general secretary Dr Surendra Jain said at a press conference on the sidelines of the conference of the VHP central board of trustees and managing committee here.

“Hindus are converted under compulsion, and through deception and intimidation. There is an atmosphere of fear and chaos all around,” the VHP said in a resolution.

The resolution denounced the exoneration of the “murderers” of Swami Lakshmananda, who was killed in Kandhamal district of Odisha a decade ago. “Conspiracies were hatched to kill Shri Lakshmananda, who had foiled attempts at rampant conversion in Kandhamal. He had survived attacks. But Lakshmanandaji was assassinated by hired killers, and the plot was obvious,” Mr. Jain said.

VHP demanded a  CBI Enquiry into the Murder case of  Swami Lakshmanananda Swaraswati and severe punishment of  all Christian missionary grabbing tribal property and destroying culture & religion of tribal people.