Jhumpa Bairagi | HENB | Berhampore | July 14, 2018:: A Muslim headmaster of a school in Bengal’s sensitive Murshidabad district, allegedly thrashed four Hindu students for uttering “Jai Shri Ram” and sporting sacred wrist gears in the holi name of ‘Bipadttarini’. The attack was so violent that one of the students, Shovan Mandal, has yet to recover and be released from the Murshidabad Medical College to which he was admitted after the incident for better treatment.

Trouble began on Friday at Shaktipur Kumar Mahimchandra Institute, when Shovan, a student of class XI standard, uttered the three words -‘Jai Shri Ram’, that sparked off tension in the school premises. He was soon joined by Anirudhha, Bikram and Somnath. A small scuffle broke out among some students. Before Friday Namaz inside the school premises, the majority of Muslim students were pressing for Islamic greeting, ‘Assalamu Alaikum’ by all others. But, the Hindu students tried to exchange greetings in Hindu way of Namaskar and Jai Shri Ram. The matter should have been ended there, but when the scuffle was reported to the Headmaster of the school, he decided to mete out corporal punishment to the three students, in a very Jihadi way to attack on Kaffirs.

In the words of Shovan, who right now is admitted in a hospital, “Sir beat me up so hard that a pipe and a tree branch broke in the process. Even when I was being rescued by my friends for first aid, he continued to beat me up.”

The tyrant Head Master Afiqul Alam allegedly warned the victims not to sport tilak or any sacred thread while in the school in earlier occasion. Violation of that might be a cause for the barbaric act done the Muslim Head Master. 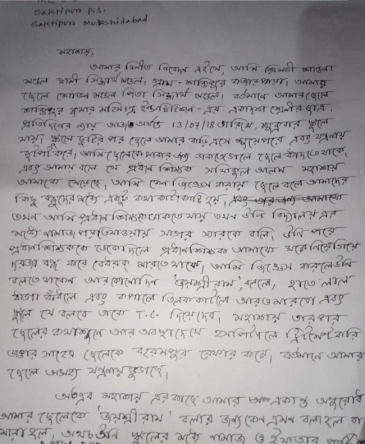 The victim student was firstly treated in Shaktipur BPHC and later admitted in Berhampur State General Hospital for speedy recovery from his serious condition.

From source, it is gathered that the Shaktipur Kumar Mahimchandra Institute was established in 1905 on the land donated by Hindus. But, in an Islamic atmosphere, the Hindu students are put in trouble to perform Saraswati Puja since last five years and now the Muslim Head Master of the school is thrashing the Hindu students in a very communal line.

Interestingly, Murshidabad is a Muslim-dominated district where the community constitutes 66.28% of the population. Allegations of religious discrimination and intolerance have been quite rampant in Bengal, but the brutality of this incident has surpassed that in many instances of the kind.

Mother of Shovan, Shantana Mondal lodged a diary in Shaktipur Police station narrating the ordeal. She complained that Hindu students used to be demoralized by the Muslim teachers in many ways, but  Friday Namaz and Iftar Parties etc. are conducted inside the school without any difficulties.

Even though the complaint has been filed against the headmaster, the cops have not arrested the accused, Afiqul Alam, for an unknown reason!

For the Muslim appeasement policy adopted by ruling TMC and WB CM Mamata Banerjee, the Muslims in Bengal are running steam rollers over the Hindus in many areas of the state, especially in rural Bengal.