Upananda Brahmachari | HENB | Haridwar | Oct 11, 2018:: IITian-turned-seer Swami Gyanswaroop Sanand, formerly Professor GD Agarwal, the a man who devoted his life to the cause of saving river Ganga, died today. Prof Agwarwal was the head of the Department of Civil and professor of environmental engineering from IIT Kanpur. The Swami was on a fast-unto-death. He died on the 111th day of fasting since June 22 last. The Swami was also the first member-secretary of Central Pollution Control Board (CPCB) of Govt of India.

Swami died at the All India Institute of Medical Sciences in Rishikesh within 24 hours after he was forcefully admitted there by the Uttarakhand Police last night. On Wednesday he was forcibly shifted to the AIIMS hospital from his Matri Sadan Ashram after his health deteriorated significantly when he even stopped drinking water from the first day of Navaratri as Central or Uttarakhand State Govt, nobody gave any importance on the causes upon which he was on fasting. The way Police lifted the Swami in a hanging condition and dumped into an ambulance which could be the major cause of worsening the health of the Swami, aged 86 years.

‘Swami Sanand died due to a heart attack’, the media coordinator of AIIMS Rishikesh told the press.

Prime Minister Narendra Modi pays tribute through a tweet+ for the death of Swami Sanand. PM Modi said Agarwal’s “passion towards learning, education, saving the environment, particularly Ganga cleaning will always be remembered”. But, the PMO never took any care for the causes for which the Swami was on fasting for a long 111 days. Paying such a tribute shedding crocodile’s tears is nothing but a exposure of the shamelessness of Prime Minister Narendra Modi.

The very busy PM Narendra Modi could not manage a few minutes to meet this Ganga Legend Swami Sanand in the four months during his fast for ‘Save Ganga’ cause. Nor he sent any emissary to him to get his ideas. But, PM is now using twitter handle to pay his ‘fake’ tribute.

Now, Swami Avimukteshwaranand Saraswati, the Shankaracraya of Badrikashram Mutt and the spiritual guru of noted environment engineer Prof GD Agrawal turned as Swami Gyanswaroop Sanand, has termed the death of Swami Sanand as a “murder” and demanded a CBI probe to bring out the facts.

“How could he die all of a sudden when he himself wrote a letter to me in the morning describing his health condition,” wondered Avimukteshwaranad, the chief disciple of Dwaraka Shankaracharya Swami Swaroopanand Saraswati.

Showing Swami Sanand’s hand written press release issued from AIIMS Haridwar on Thursday morning, the seer said, “How it could be possible that a man who was healthy while doing austerity for 111 days in his ashram, and who wrote a letter to press today in the morning, died after spending a night in the hospital?” “We suspect that Swami Sanand was murdered,” Avimukteshwaranad said demanding postmortem of his body and a CBI probe into his death.

This video says many things. Such a strong man like Swami Sanand was died in AIMS with 24 hrs after he was forcefully arrested by the Uttarakhand Police.

Certainly, Swami Sanand was  not a certified Sadhu of Sangh Parivar. So, it’s a least concern for Nagpur or Delhi offices of RSS-VHP-BJP!

Earlier, Swami Nigamananda Swaraswati of same Matri Sadan Ashram (where Swami Sanand was fasting) was died after fasting for four months+ in June 2011 to Save Ganga. Definitely, we forgot that sacrifice as that was not recorded in RSS-VHP-BJP hand book. 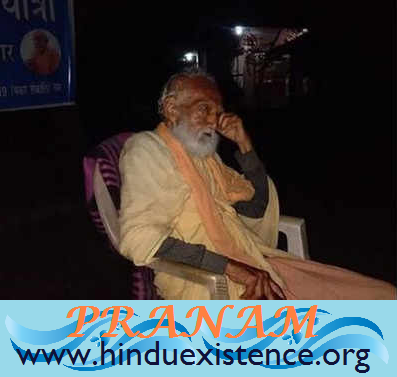 One comment on “‘Ganga Activist’ Swami Sanand, On Fast Nearly 4 Months, Dies Within 24 Hrs, After Uttarakhand Police ‘Forcefully’ Shifted Him to AIIMS, Rishikesh.”