UP: Muslim man converts to Hinduism, claims Lord Ram asked him to do so.

‘Asked’ by Lord Ram ‘in dream’, Muslim Man in UP Converts to Hinduism along with Family; expresses his willingness to visit Birth Place of Lord Ram in Ayodhya. 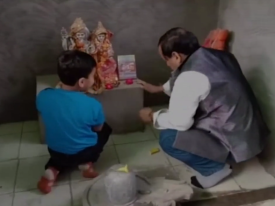 Anil Shrivastava | HENB | Shamli | Nov 03, 2018:: Amid hectic politics over Lord Rama, a Muslim man in Uttar Pradesh’s Shamli a Muslim man along with his family converted to Hinduism on his faith on Lord Ram. He claimed that Lord Rama was appearing in his dreams for last couple of days, asking him to return to Hinduism. After conversion, he changed his name from Shazad to a Hindu name Sanju Rana. He approached the office of the district magistrate to make his conversion official. He clarified that he is not under any pressure from any person or group for the conversion and his family is also happy with the decision. He also claimed that his ancestors were Hindus, who were forced to convert to Islam.

“For the past 15-20 days, Lord Ram has been appearing in my dreams, asking me to come back (to Hinduism). We were Hindus earlier; invaders had come to our lands centuries ago and forced my ancestors to convert to Islam. I am just returning to my roots,” Rana told ANI.

Shazad after becoming Sanju told HENB that he had been chanting the name of Lord Ram from an inner inspiration since long and listening the bhajan of Lord Ram as he and his family members linked it very much.

“I am also interested to visit Ayodhya and the birth place of Lord Ram there with my family,” told Sanju to HENB.

But, some Muslims of the locality expressed that Shazad had some property dispute with some of his relatives and thus he separated himself from their relations. Another group of Muslims told that Shazad made up his mind to convert for some unknown reason apart from ‘concocted dream of Lord Ram’.

___Inputs from ANI and TOI.

One comment on “UP: Muslim man converts to Hinduism, claims Lord Ram asked him to do so.”