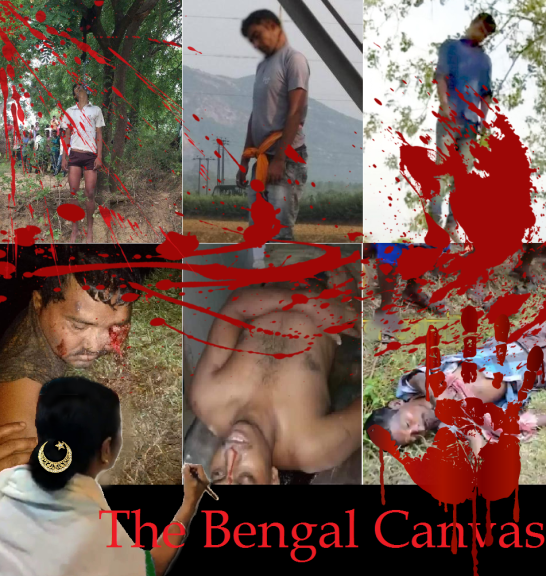 Bengal has been turned as a killing fields of Hindus by Jihadi TMC under the provocation of Mamtaz Banu Arjee. Emergency should be imposed to save the life of peaceful people of the state.

Upananda Brahmachari | HENB | Haridwar | June 10, 2019::  Staying far away from Bengal, it’s my horrific sensation to see and hear the audio-visual inputs from many print and electronic media sources that Hindu life of West Bengal has grossly been endangered by the Jihadi TMC goons time and again in the post election phase. The design and gravity of the attacks on the Hindus who believe in the RSS-VHP-BJP ideologies are now totally exposed as an fundamental exercise of Jihadi elements in TMC so provoked by anti-Hindu, anti-Jai Sri Ram and self-claimed ‘Muslim appeaser’+ WB CM Mamtaz Banu Arjee. Actually, Mamata Banerjee must be disowned from her Hindu name and must be called otherwise. The grave law and situation in Bengal leads the state for an impending emergency to save the life of peaceful people of the state.

Another horrific murder on Monday, within a day of the first killing, intensified the political violence and vitriolic blame game between BJP and Trinamool in the state.

On Monday, BJP worker Samatul Dolui‘s body hanging from a tree near a field was discovered by residents of Sarpota village in Howrah’s Amta. Dolui’s family and BJP netas in Howrah were quick to blame Trinamool. “Dolui was active in BJP and gave the party a lead from his booth in the Lok Sabha polls. He had received death threats soon after he took out ‘Jai Sri Ram’ rallies in the locality. Trinamool-backed anti-socials ransacked his house immediately after polls,” said BJP’s Howrah (rural) president Anupam Mullick.

When some miscreants tried to snatch Dolui’s body while it was being taken for post-mortem, villagers protested, prompting the district administration to deploy RAF.

A day earlier, on Sunday, an RSS veteran, Swadesh Manna, too was found hanging from a tree in Atchata village. Manna had also been taking out local ‘Jai Sri Ram’ rallies for the past few days. “In both cases, Trinamool supporters have killed our party workers,” Mullick alleged. The murders threw up a recall of similar killings in Purulia in the run-up to the 2018 panchayat polls when BJP workers had been found hanging from poles. But unlike in Purulia, Dolui’s body had no posters attached. Between WB Panchayet election in 2018 to Lok Sabha Election, Purulia witnessed shocking murder and hanging of Trilochan Mahato, Dulal Kumar and Sishupal Sahish.

Trinamool MLA Pulak Roy denied his party men’s involvement. “BJP is trying to shame us. But none of our workers is linked to it,” he said. In another incident in Sodepur, two disgruntled security men Rakesh Das (38) and Sujit Biswas (40) were beaten up with iron rods by suspected members of Trinamool’s trade union wing INTUC. Das and Biswas had tried to float a BJP-affiliated union. The duo was rushed to hospital. A complaint has been lodged against six Inttuc ‘members’ at Khardah police station.

BJP workers hit the streets to protest the Sandeshkhali killings+ in North 24 Parganas barely two days ago, blocking rail tracks on the Sealdah-Basirhat section as part of a 12-hour BJP bandh in South 24 Parganas. In the post poll violence in Sandeshkhali, three BJP local leaders viz- Pradip Mondal, Tapan Mondal and Sukanta Mondal who  joined BJP months back from a Hindu right wing group – ‘Hindu Samhati’, as reported. BJP claimed another 5 persons of their party are still missing.

Though Police initiated three separate FIRs, the mastermind of Sandeshkhali carnage, TMC leader Shahjahan Sheikh is roaming free and all the murders in Sandeshkhali happened in the presence of Police in the clash areas. BJP leader Mukul Roy blamed WB CM for such killing spree for her political interest+. It is also alleged that the Jihadi gangs of Shahjahan Sheikh are carrying deadly weapons with their Rohingya counterparts+ to drive out Hindu people from Sandeshkhali.

For the unlimited support of TMC and its Jihadi Queen Mamtaz Banu Arjee, Bengal saw an Islamist upheaval though riots against Hindus, snatching their properties, rape and abduction of their girls and women, murders of Hindus and caused migration of Hindus from many areas of Bengal as an out come of Deganga, Naliakhali, Canning, Khagragarh, Kaliachak, Baduria, Bashirhat, Usthi, Samudragarh, Dhulagarh, Sandeshkhali riots and carnage and so on.

Jihadi Queen Mamtaz wants to make WB as a ‘Jai Shri Ram’ free zone and “Allah-ho-Akbar’ arced. She puts restrictions for Durgapuja and immersion for the ease of Muharram. She allows Bengal as Beef bazar and a garden for Bangladeshi infiltrators and Jihadi elements. Mamtaz draws a horrible picture on Bengal Canvas with Hindu blood and Jihadi brush.

Bengal has turned as a killing fields of Hindus by Jihadi TMC under the provocation of Mamtaz Banu Arjee. Emergency should be imposed to save the life of peaceful people of the state.

__Some inputs from TNN./ Courtesy to the links and pics used.

One comment on “Mamtaz draws a horrible picture on Bengal Canvas with Hindu blood and Jihadi brush.”