Not in Pakistan, Shiv, Durga, Ram, Ganesh, Saraswati Deities  vandalised in Delhi’s Durga Mata Temple complex (Lal Kuan-Chwari Bazar area in Old Delhi) one by one. Minority Hindus under Islamic attack in Delhi. Is Indian Capital is under the grip of Jihadis?

Sumedha Singh | HENB | New Delhi | July 1, 2019:: A temple in Chandni Chowk in Central/Old Delhi was allegedly vandalised by a fanatic mob last night. According to reports being posted on social media by locals, the Durga Mata Mandir in Lal Kuan-Chawri Bazar locality in Hauz Qazi area became the target of vandalism by a Muslim mob of 300-400 people on the night of June 30, 2019.

According to locals who posted videos of the temple on social media, at around 12 am, the Durga Mandir was attacked by 300-400 fanatic people belonging to the Muslim community. Along with the temple, the houses belonging to Hindus in the neighbourhood were also targeted by the Jihadi mob, the locals alleged.

A video shared by ruling AAP (Aam Admi Party) MLA in Delhi, Kapil Mishra shows youths storming into the temple with Islamic slogans like “Naaray E Takbeer – Allah Ho Akbar’, and also surrounding the Hauz Qazi police station in the area. Mishra tweeted that before the incident, a rumour was spread that a Muslim boy was lynched by a mob, forcing him to say Jai Shree Ram. But the whole incident happen out of a dispute involving car parking between two families. 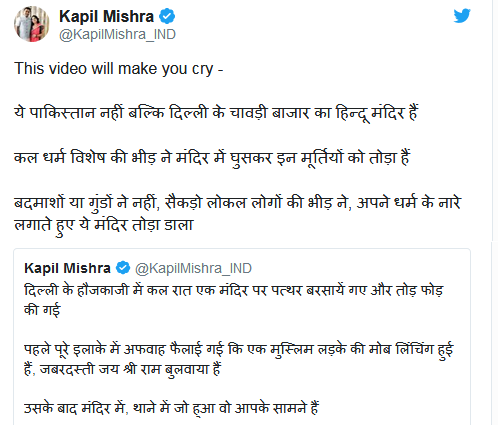 The photos and videos shared on social media show that the statues, fixtures, glass panes etc in the temple were smashed, curtains etc were burnt by the mob. According to locals, the population of Hindus in the area is just around 5%, and the rest 95% are Muslims, who mercilessly smashed the entire temple.

A team of Delhi police, comprising senior officials, arrived soon after they were informed about the incident, and they prevented further damage. The arrival of police also ensured that nobody was harmed in the incident. The police have so far been tight-lipped and we are awaiting a statement regarding the incident.

Many eminent Hindutva personalities took their twitter handle to protest against the Delhi Temple attack by Jihadi mobs near Chandni Chowk. 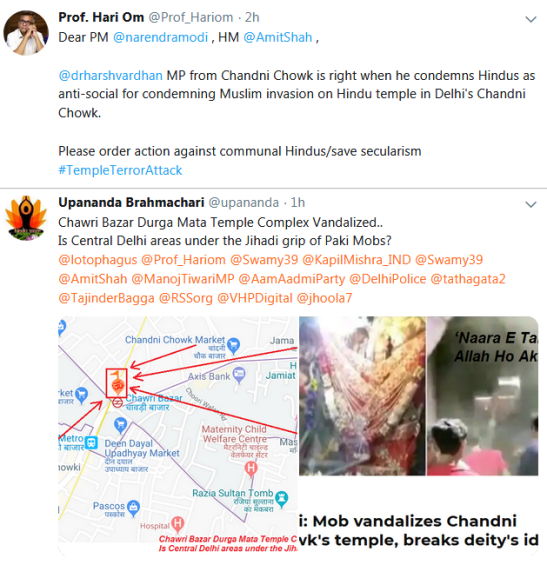 100-year-old Chandni Chowk temple vandalise; What we know so far

A brawl that started over bike parking developed into full-fledged communal clash in Delhi’s Chandni Chowk area. Several injuries were reported when a group of men forced their way through a 100 year old Durga temple, completely vandalizing it.

There was stone-pelting which in turn added to chaos and scuffle which resulted in further injuries.

A source conveyed that the police intervened in time. Otherwise, the nearby Muslims provoked by different Mosques near and far areas were planning to attack the Hindus in different areas of Delhi on that night of Jihadi action.

Police are looking into the matter and have tightened security in the area to ensure no untoward incident happens.

Hindus in the related areas of disturbance are only 5% and Muslims are 95%, as reports came in.

Hindu Existence appeals to all people in the area to maintain peace & order and cooperate with the law enforcement agencies.