Hate Mongering by Jihadi Soldier in Border Security Force against Hindus. Why he is not expelled yet? 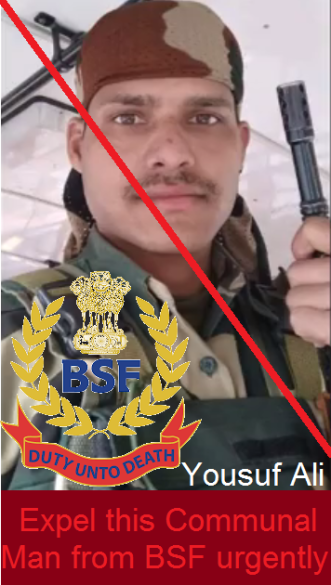 Upananda Brahmachari | HENB | Haridwar | July 6, 2019:: Few days ago Jihadi Muslims vandalized an old and traditional Hindu Temple at Lal Kuan near Chawri Bazar+, out of a trifling issue like bike parking in front a house, which turned as a communal violence at once on 30th June Night+.

Hundred of local and outsider Muslims attacked on a minority Hindu pocket encircled by Muslim majority and destroyed the Hindu houses and properties including the 100 yrs old Gali Durga Mata Temple of Houz Quazi area of Chandni Chowk. Since then a 17 yrs old boy named Keshab was missing and his parents feared that he could be murdered after the Jihadi abduction during the chaos was going on. But, the missing boy Keshab returned home 72 hrs after held captive by Muslims+.

On checking (by ShankhNaad [1][2] a active pro-Hindutva social media group) of the face book profile of anti-Hindu Yousuf Ali, it reveals that he is a soldier in Border Security Fore (BSF) in India.

Not only that the BSF constable Yousuf Ali has his facebook+ connection with his many girl friends in Myanmar, Philippines and Malaysia. This is also a very suspicious matter that a soldier is keeping his discreet relations with foreign nationals from those countries in which many anti-Indian organizations function well.

(Though, there is nothing written in his profile about himself, a checking from his friends list it can be guessed that Yousuf Ali hails from West Bengal).

It is obvious that such with hate against Hindus will definitely help Rohingya and Bangladeshi Muslims to enter India very illegally. BSF must expel the hate preacher Yousuf  (if the allegations are proved) for his dangerous comments against majority Hindus in India.

The matter has been tweeted by many to President of India. PM Modi, Home Ministry under which BSF functions, Home Minister Amit Shah, Hindu think Tank Dr Subramanian Swamy and others. But, no action against Yousuf Ali is perceived so far. People of these types of mindset like Yousuf Ali don’t deserve to be in the FIRST LINE FORCE like BSF.

The exposure of the mentality of BSF man Yousuf Ali puts a bitter question to all concerned that the growing numbers of Muslims in the defense/police in India or any non-Muslim countries may get hard shock at the material point of time when the Momin (Muslim) personnel in defense or police will get the chance to do their duties to annihilate the Kaffirs as per the teaching of Quran or through its misinterpretations by joke!

(All the sources received from authentic Social Media Groups and the concerned authorities must verify further to take strict action).

Courtesy: ShankhaNaad and the sources used above.

One comment on “Hate Mongering by Jihadi Soldier in Border Security Force against Hindus. Why he is not expelled yet?”