Not in Pakistan, but in a BJP run state in India…

Jihadi man forcefully converted, then raped and forced a Hindu girl into prostitution in Uttar Pradesh.

Upendra Bharti | HENB | Bareilly | Sept 14, 2019:: It is difficult to understand whether Muslims get extra pleasure by raping Kaffir girls and women of Hindu, Christian, Jews, Sikh or Buddhist folk, but the numbers of Jihadi rape in India are gradually growing!

A critical case of love jihad has been reported in Bareilly+ where the girl student was forcibly converted to Islam by one Mohammed Azhar, and then brutally gang-raped by the accused and his friends. When the crime was reported to the police, the girl was threatened with an acid attack by the accused.

The victim is actually a resident of Nagohi area of Shahjahanpur, who lived in Bishalpur area of Pilibhit with her sister for her studies. She has alleged+ that Azhar hid his religion from her and told her his belonging in the same Hindu religion and finally trapped her in a love affair. He coerced her into a physical relationship and then her video was recorded while in the act. Azhar then allegedly blackmailed her threatening to make the video viral in social media platforms. The girl reported to the Senior Superintendent of Police that Azhar brought her to Bareilly in April by trickery and blackmail, and forced her to convert before a forced marriage. Unfortunately, as told by the victim, the Baradari Police Station did not receive any complaint to register any FIR in the related case.

The victim girl has alleged that she was kept in a rented room by Azhar who used to beat her and had let his friends rape her. She was also allegedly forced into prostitution. Azhar and his friend Zeeshan allegedly also used to beat the victim on regular basis.

No arrests so far made in the case as reported by local news agencies.

Not in UP only, such Islamic video recording of Jihadi sex ultimately led a murder of a Hindu girl in WB… 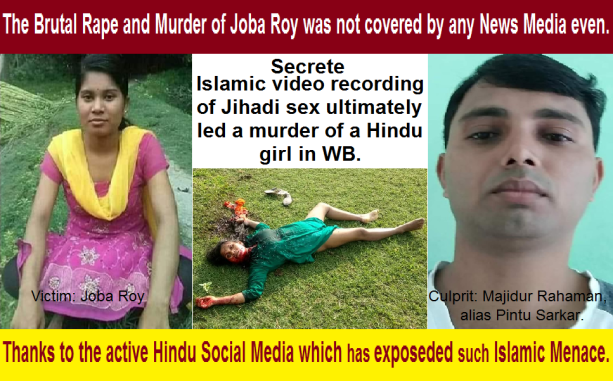 On 7th September, dead body of an intending paramedic named Joba Roy was recovered from Patan Para river side in Gangarampur in South Dinajpur of West Bengal.

According to family members of Joba, one Majidur Rahaman, also a Paramedic working in Kaldighi Rogmukti Diagnostic  and Dishari Health Center, who is a married man with two children is behind the murder of Joba Roy.

Majidur took a pseudo Hindu name as Pitu Sarkar and developed a physical relationship with Joba and grabbed many video of secret sexual act very secretly in a plotted Love Jihad.

When Joba divulged the Islamic identity of Majidur and tried to take break a break-up with Majidur, the jilted Muslim man hatched a conspiracy to murder of Joba ruthlessly, sources said.

An FIR (134/19) has been registered in Gangarampur PS by the father of Joba, but police is delaying the investigation process not to arrest the culprit, under the pressure of local Islamic leaders connected with ruling TMC party, as alleged by the family members of the victim. 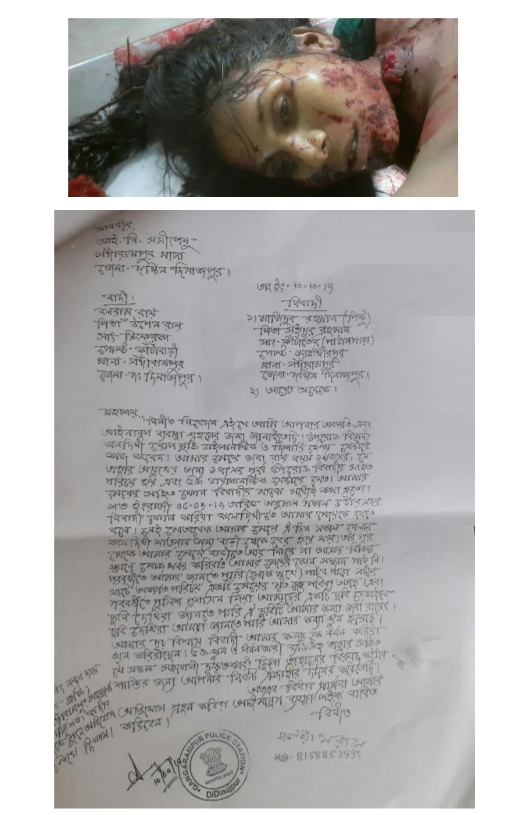 The condition of dead body of Joba Roy as found in the place of recovery in desolated place in semi stripped off condition and violation marks in personal parts highly suggest as a case of rape and murder, some private detectives say.