Everyone will get fruits of deeds….

Nischalananda Swamiji said that Hindus are innocent and their religious feelings are hurt by the actions of other communities. “Hindus are open-minded. We are not against the Muslim community but we cannot compromise on the issue of Ram Janma Bhoomi. We cannot sacrifice even an inch of land for the Muslims in Rama Janma Bhoomi. Hindus are not opposed to the Muslims as evidenced by the fact that in a country where majority of people are Hindus, there have been many Muslim Presidents, home minister and supreme court judges,”

“The Supreme Court verdict allowing five acres of land to Muslims would create a big spiritual conflict in the holy land of Ayodhya”, said Shankaracharya Nischalananda Saraswati Swamiji of Puri Govardhan Mutt, in a press meet held at the Pejawar Mutt here on Wednesday, November 27.

Shankaracharya Nischalananda Saraswati Swamiji arrived at the Udupi Pejawar Mutt and met Sri Vishwesha Theertha Swamiji. speaking to the mediapersons Shankaracharya Nischalananda Saraswati Swamiji said, “If five acres of land is given to Muslims in Ayodhya, they will make the holy land into a second Mecca and the very essence of Ayodhya being the spiritual capital of the world will be affected.”

Shankaracharya Nischalananda Saraswati Swamiji further said, “We are Hindus, we have given Pakistan and Bangladesh to Muslims. Our country had 3 Muslim president’s, many chief ministers and Judges. Now the Supreme Court has given the verdict of giving 5 acres of land in Ayodhya to the Muslims. I am not happy with the verdict of the supreme court of giving land to Muslims in Ayodhya”.

Shankaracharya Nischalananda Saraswati Swamiji also said, “Once former Prime Minister Narasimha Rao requested me to sign a document approving the construction of the Ram Temple and the Mosque in Ayodhya. But I did not sign the documents. Later, Rao did not bring forth his own proposal. Now, the present Government wants to take the credit by giving 5 acres of land to Muslims,” said Shankaracharya. 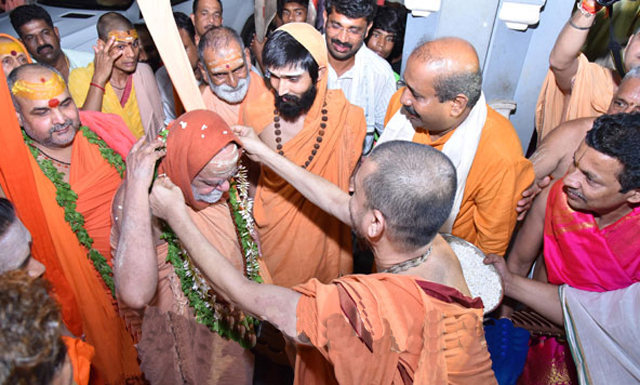 Puri Shankaracharya received a warm welcome during his Udupi visit.

Shankaracharya Nischalananda Saraswati of Puri Govardhana Peetham received a warm welcome at Udupi Sri Krishna Mutta by the ashramites and devotees including many media persons.

During interaction relating to Sabrimala issue, he said that restrictions on religious basis are scientific. “Like certain restrictions imposed in worldly affairs, religious restrictions are there, and Sanyasis have lot more restrictions. The restrictions are stringent for a Brahmin while it is less for others. Everyone from the highest placed person to the civic worker, will get fruits of their deeds (Karma) which cannot be avoided or swindled,” he enumerated.