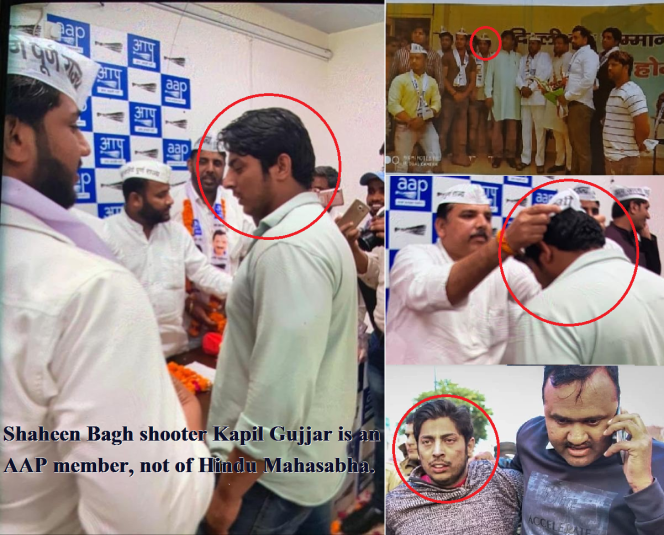 Kapil’s AAP connection proves that he was set to defame Hindus and Hindutvawadis.

Upendra Bharti | HENB | New Delhi | February 4, 2020:: “In our initial investigation we found some photos from Kapil’s phone that establish & he has already disclosed that he & his father joined AAP a year ago. We have taken his 2 days remand,” Rajesh Deo, the DCP Crime Branch told ANI+.

Deo said that photos from Kapil’s WhatsApp folder had been deleted and was recovered during the course of the investigation by the technical team. Some of these photos established that he and his father had joined the party.

Protests have been going on in Delhi’s Shaheen Bagh area since December 15.

As per report+, “the protest took a violent turn when a man named Kapil Gujjar opened fire near the anti-CAA protest at Shaheen Bagh on Saturday February 1. According to eyewitnesses, Kapil shouted “Hindu Rashtra Zindabad” and fired two rounds. Kapil had threatened Shaheen Bagh warning them to vacate the premises from where they have been protesting against CAA and NRC. The shooter has since been taken into custody. The firing took place near Jasola red light. No one was injured in the incident which occurred at around 4:53 pm. Among the slogans the gunman shouted before pulling the trigger was ‘Dilli Police zindabad'(Long Live the Delhi Police)”.

But, the revelation by Delhi police as ‘AAP connection with Kapil Gujjar’ now hints that the shoot out by a country made pistol by the was an effort to to defame Hindus and Hindutvawadis in a very ridiculous way. 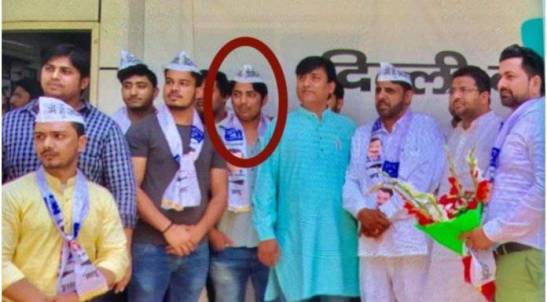 Kapil Gujjar, Shaheen Bagh shooter at AAP party meet in Delhi. All Pics in this news from Social Media.

The major portion of Indian media also narrated the shoot out as a fanatic act by a Hindu activists, but that was washed out by the reports so far collected by the Delhi police though investigation. Some media house depicted Kapil as a member of Hindu Mahasabha.

But, the shameless and irresponsible media did not highlight the matter of Kapil’s connection with AAP who are behind the Shaheen Bagh and Jamia Protests against CAA jointly with Congress.