Who is afraid of Hindutva? 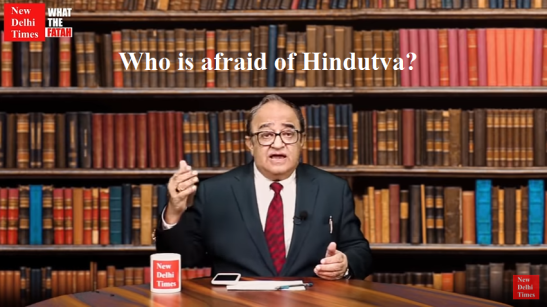 I am a liberal Muslim…. I have no objection on Hinduism or Hindutva: Tarek Fatah.

Fatah tells, he has no objection on Hindu or Hindutva and these don not infringe any right of anybody and Hindustan is the only country as their home country.

The philosophy of Hindutva was penned by Veer Savarkar during his long solitary confinement in the penal colony of Andaman Islands as punishment for his fight against British colonial rule.

Savarkar was an atheist but a strong believer in preserving Indian civilization that sprung out of Mohenjodaro in Sindh over 5,000 years ago.

However, when his philosophy was embraced by Hindu nationalists, his work was portrayed as having been inspired by the Nazis and other fascists.

Today both ’Hindutva’ and ’Savarkar’ have become words of infamy and political slurs hurled by India’s so-called secular elites allied to medieval mullahs.

In this brief talk author, Tarek Fatah says ’Hindutva’ is not a symbol of Hindu supremacist ideas as claimed by its critics, but a yearning to celebrate a rich past of Hindustan buried by over 1,000 years of foreign Muslim occupation and European colonization.

In an eloquent way, Tarek Fatah rubbished all the stands taken so far by the selective liberals and pseudo secular lobby who oppose Hindu and Hindutva both in a very vilified way.

3 comments on “Who is afraid of Hindutva?”

This entry was posted on June 3, 2020 by hinduexistence in Hindu Culture and Tradition, Hindu Faith, Hindu Heritage, Hindu Inspiration, Hindu Knowledge, Hindu Solution, Hindu Wisdom and tagged No objection on Hindu or Hindutva, Tarek Fatah, Who is afraid of Hindutva?.