The Hindu Persecution in Islamic Bangladesh raised high in first six months of 2020, even during Corona pandemic. 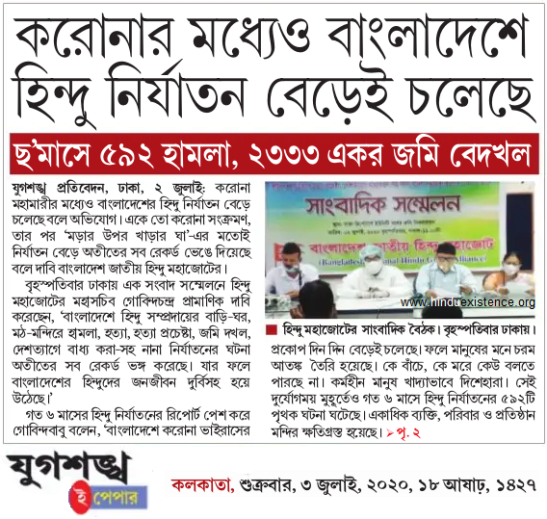 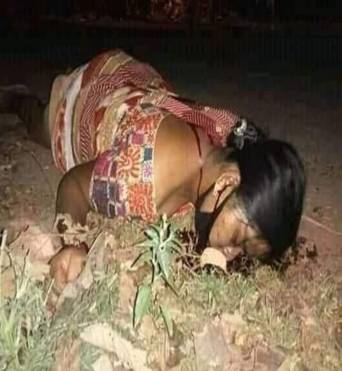 In Islamic Bangladesh, Hindu girls and women are being used as sex toys of Quran followers.

Giving an account of alleged atrocities, the Alliance said there had been a series of incidents in last six month like Hindu shops being looted, minority Hindu people and Hindu businessmen being killed, lands of marginal Hindus  being forcefully grabbed, temples being demolished and idols vandalized, Hindu person forcefully converted,  families being forced to leave the country and Hindu girls and women being abducted and raped in almost regular basis.

“In the first six months (i.e. January to June) of 2020, 592 cases of attacks and atrocities held in separate places and 2333 acres of valuable land of minority Hindus grabbed by Muslim land mafias, when the marginal people in Bangladesh are facing a dangerous hardship in a pandemic situation, ” the Alliance’s General Secretary, Advocate Godinda Chandra Pramanik  said in a press meet held on Thursday (July 12, 2020) in Dhaka.

“The human rights situation is worsening day by day in Bangladesh but unfortunately no one has been arrested yet,” the Alliance lamented.

The organisation linked with World Hindu Federation demanded exemplary punishment to the criminals for the atrocities unleashed on the minorities in the country.

The Bangladesh National Grand Hindu Alliance also raised the alarming situation of teen aged Hindu boys and girls being trafficked in Arab Countries without any hazards, so far.

The Alliance listed a series of incidents of Jihadi atrocities on the minority Hindus of Islamic Bangladesh in the first six months of 2020 as follows:

The Political equation in Bangladesh does not favour the minority Hindus in crisis, in fact. The Ruling party, (Awami League) and the Opposition party, Bangladesh Nationalist Party both exploit the minority Hindu votes for their political mileage, not for the safety and security of minority Hindu people or the marginal indigenous people struggling there for their existence in a danger of Jihadi upsurge. 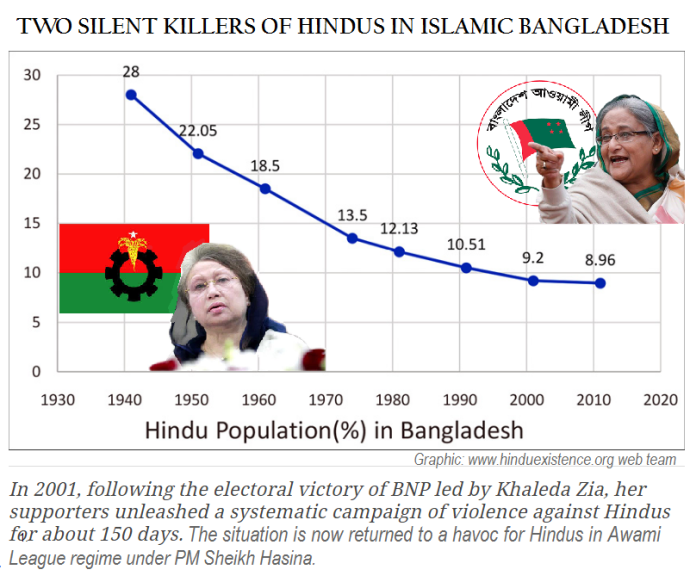 Bangladesh Prime Minister, Sheikh Hasina Wazed keeps a good relation with Hindu majority India and its Hindutvawadi PM Narendra Modi. But, side by side, the covert Islamist and Bangladesh PM Hasina has given a free hand to her communal Jihadi political allies to extremely harm to the minority Hindus of Bangladesh, so that Islamic Bangladesh can be made as Hinduless (Kaffir Free) Bangladesh within 2045 or much early.

No Hindus will be left in Bangladesh after 30 years: professor (The Hindu)

One comment on “The Hindu Persecution in Islamic Bangladesh raised high in first six months of 2020, even during Corona pandemic.”