WB: Vehicles torched, cops injured in violence after gang rape and murder of Hindu student by a Jihadi Rapist.

Locals set police vehicles and public buses on fire, block road during a protest against an alleged rape and murder of a girl in Bengal’s north Dinajpur district on Sunday. (ANI & PTI)

‘TMC Queen and Jihadi Didi Mamata Banu tries to hide this rape and murder to save her rapist Muslim brothers’….. 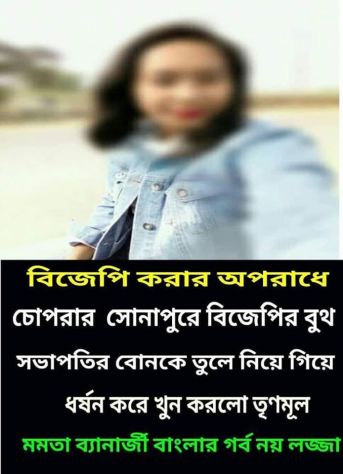 From a Face Book Source.

Sandhya Bista | HENB | Siliguri | July 19, 2020:: Chopra in Muslim majority North Dinajpur district in north Bengal turned into a battleground on Sunday afternoon, hours after a 15-year-old Hindu girl was allegedly raped and murdered by a ‘TMC goon’ named Feroze Ali with his some suspected associates. But police under the control of Jihadi Didi WB CM Mamta Banu is trying to paint the gang rape & murder in another way by saying  the post mortem revealed that she died of poisoning.

The girl, Mumpi Singh, sister of a BJP booth president had appeared for the class 10 state board examination and passed successfully this year. The victim went away from without anybody’s notice and found unconscious, 700 meters away from her home under a tree at road side, where bicycles and some mobile phones were also found. Police told that a  bottle of poison was also found there.

Local people torched three government buses and two police vehicles and vandalised a number of other vehicles. Shouting “we want justice,” the mob also attacked policemen while Bharatiya Janata Party (BJP) leaders took up the issue alleging that the girl belonged to a family of BJP supporters and thus became a target of goons backed by the ruling Trinamool Congress party.

At least 30 people, including some police personnel, were injured in the pitched battles. Tension was palpable in the area till late evening.

The area where the alleged rape and murder took place comes under the Chaturagaj at Sonapur gram panchayat area of Chopra block in North Dinajpur under  Darjeeling Lok Sabha constituency. She was found by the roadside early in the morning, around 700 metres away from her home, and taken to Chopra hospital and subsequently to Islampur sub-divisional hospital where doctors pronounced her dead.

The family of the victim claimed that some mobile phone and two cycle of the suspected murderers, Feroze Ali and his associates,  were recovered from the spot but a police officer who requested anonymity said “A bottle of poison was also found.”

Mysterious that police was not interested to get the antecedents of the owners of the recovered two bicycle and some mobile phones at the spot of the ‘rape & murder’ but tried to implicate the case with a finding a poison bottle. But, Police was not sure whether it is a case of suicide by taking poison or a cold blooded murder after rape by poising!

Local people and BJP supporters blocked the Chopra state highway for hours. In the afternoon, they blockaded NH-31. When police tried to remove the roadblocks, the protesters hurled stones. Several clashes ensued and police had to use baton-charge tear gas shells to bring the situation under control.

The elder brother of the girl alleged that his sister was raped and murdered because his family supports the BJP. He claimed that he is a local BJP leader and blamed the ruling Trinamool Congress (TMC) for the incident.

As per media reports, the 16-year-old girl had just passed her Class 10 board exam and her family launched a search party after she went missing Saturday night and spotted her body under a tree. Locals have alleged she was gang-raped and murdered. The cops have recovered two bicycles and some mobile phones from the scene and the probe is on.

In a tweet, the Bengal unit of the BJP, the victim was the sister of the local party booth president. Attacking Mamata Banerjee, the party said a state governed by a woman Chief Minister “cannot protect its girls”.

Surajit Sen, vice president of the BJP Uttar Dinajpur district committee said “TMC-backed miscreants committed the heinous crime.” And “it is clear that the Jihadi goons are playing anything with Hindu girls and women in Muslim majority areas in Uttar Dinajpur under the indulgence of WB CM. TMC Queen and Jihadi Didi Mamata Banu tries to hide this rape and murder to save her rapist Muslim brothers,” told another BJP worker, who requested anonymity.

Darjeeling’s BJP MP Raju Bista said, “Local people informed me that she was raped and poisoned. In the past few years, Chopra has seen exponential rise in illegal infiltration and crime. This was once a peaceful region.”

The West Bengal Police on Sunday night said in a series of tweets that preliminary report of the post mortem examination pointed at death caused by poisoning and did not show any sign of rape. The tweets also said that the girl’s family did not lodge any complaint and police acted on its own.

“Today morning Islampur PD received a reliable information about the death of a young girl of Chopra PS area. Family members or any other associated persons didn’t inform Police. Police contacted the family and sent the body for Post Mortem,” said one of the tweets.

“Inquest by a magistrate and videography of the Post Mortem was done. As per the PM report cause of death is “effect of poison”. No injury marks anywhere in the body has been found. There is no sign of sexual or physical assault. Though law and order problem has been created over the issue, yet no complaint has been lodged with police,” the police said in another tweet.

The incident in Chopra happened six days after Debendranath Roy, a BJP legislator from Hemtabad in North Dinajpour was found hanging around two km away from his home. The BJP has demanded a CBI inquiry, calling it a political murder. Chandima Roy, the legislator’s wife has moved the Calcutta high court demanding CBI enquiry. The state CID has arrested one man in the case.

Gautam Deb, state tourism minister and Senior TMC leader condemned the murder and blamed the BJP for resorting to dirty politics over her death.

Deb said “Two state ministers and a member of Parliament will visit the girl’s house. We are with the family.”

But, Hindu locals are retaliating heavily as their existence in rural Bengal in Muslim majority areas are being challenged and endangered grossly.

Taking his twitter handle, Hindu Existence Editor and Hindu interlocutor Upananda Brahmachari expressed his anxiety and concern for the incident, “This rape n murder in Chopra happened 6 days after Debendranath Roy, MLA from Hemtabad in North Dinajpur was found hanging around 2 km away from his home. Hindus in Chopra in utter Jihadi threat & insecurity. N Dinajpur is a Muslim majority dist in WB & Jihadis are ruling there.”

__Inputs from Hindustan Times, Times of India and Republic World.

One comment on “WB: Vehicles torched, cops injured in violence after gang rape and murder of Hindu student by a Jihadi Rapist.”