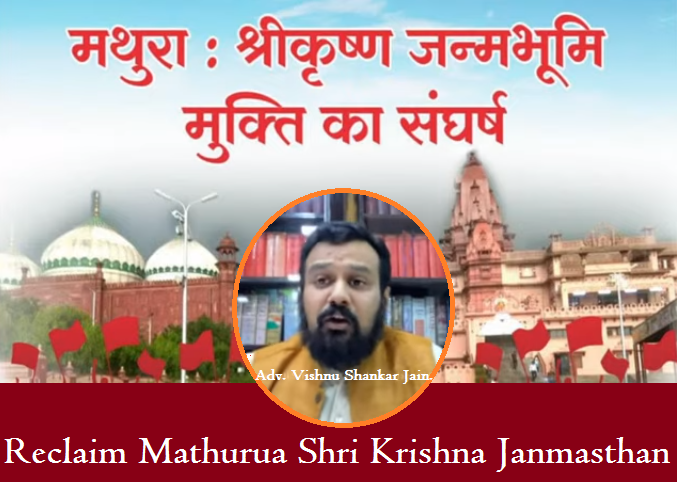 Advocate Vishnu Shankar Jain should be covered under security as Islamists are hatching ploy to kill him….

Upendra Bharti | HENB | Mathura | Oct 16, 2020:: After the victory of Hindus in Ayodhya Ram Temple case, now Mathura has been turned as a symbol of Hindutva movement by removing the Islamic aggression over Sri Krishna Janmasthan. A Mathura court on Friday admitted a plea seeking to remove a 17th-century mosque situated adjacent to Shri Krishna Janmabhoomi in the Uttar Pradesh city.

The court of district judge Sadhna Rani Thakur has accepted the appeal and will next hear the matter on November 18.

A civil court last month had dismissed a suit filed to remove the Idgah Mosque alleging it was built over Krishna Janmabhoomi. Mathura is considered the birthplace of Lord Krishna.

A group of people had moved the Mathura court over the 17th century Shahi Idgah mosque they claim was built at the birthplace of Krishna, within the 13 acre premises of the Katra Keshav Dev temple. The earlier petition, filed in the court of Senior Civil Judge Chhaya Sharma, had also demanded the annulment of a 1968 Mathura court ruling ratifying a land deal reached between the Shri Krishna Janmasthan Seva Sansthan and Shahi Idgah Management Committee.

When the senior division civil judge dismissed their plea on September 30, they appealed in the district court on October 12 terming the order “erroneous and against facts”. After summoning the record of the lower court, the district court admitted the appeal on Friday.

“Admit appeal. Issue notice to opposite parties to appear in the court on November 18,” District and Sessions Judge Sadhana Thakur said.

“Ultimately the district judge has accepted our point. We have been fighting for justice for the last one month,” said counsel for the petitioners Vishnu Shankar Jain. “We were confident about the admissibility of the appeal.”

The suit was filed last month on behalf of child deity Bhagwan Shrikrishna Virajman through the “next friend” Ranjana Agnihotri and seven others. Next friend is a legal term for a person who represents someone directly unable to maintain a suit. The defendants in the case were the Uttar Pradesh Sunni Central Waqf Board, the Shahi Masjid Idgah Trust, the Shri Krishna Janambhoomi Trust and Shri Krishna Janmasthan Seva Sansthan, Jain said.

(With inputs from PTI)

From the predictions  made by various spiritual, theosophical, metaphysical forums, it is derived that Islamists are hatching conspiracy to murder Adv Vishnu Shankar Jain who was the advocate of Hindu sides of Ayodhya Ram Temple litigation in Supreme Court. Advocate Jain also moved the apex court to repeal The Places of Worship Act 1991. He also challenged the provision of unreasonable Minority scholarships and facilities given to Muslim students.

Hence, the Islamists forces are naturally angry to Advocate Vishnu Shankar Jain and Union Govt must provide adequate security to Advocate Jain to remove any life threat to him.

(With inputs from Transcendental India)