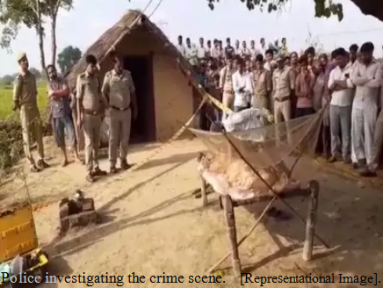 Avinash Tomar | HENB | Bulandshahr | March 29, 2021:: The Uttar Pradesh Police under the BJP’s popular Hindutva Poster Boy, Yogi Adityanath is on high alert after a Hindu priest, identified as 50-year-old Ashok Kumar from Kailavan village in Salempur, was found dead in a mustard field near the famous Dhakwale temple in Aanchru Kala village of Shikarpur with brutal stab wounds on his neck in Bulandshahr. According to police reports, there was a brutal stab wounds on sadhu’s neck using a sharp weapon+.

The murder has triggered outrage by the aggrieved devotees and can lead to a possible communal riots. Hindu devotees of the temple see a Jihadi hand behind the murder of the Hindu priest, who recently supported a cause of campaign demanding”No entry of Muslims in any Hindu shrine or temple”.

CO Bijendra Rastogi and Police Officer Subhash Singh arrived at the scene. The body has reportedly been sent for the post mortem. SSP Santosh Kumar Singh said that the police was investigating into every aspect and will soon reveal the killer.

Those who think a BJP ruled state is a safe place for Hindus or Hindu saints-priests-religious men, Uttar Pradesh is a glaring example for disillusionment for them through an analysis of the gruesome pictures revealed from the scenes below:

Last week, a sadhu was found brutally murdered by smashing his head with a heavy object and burning his private parts in Islamnagar, Uttar Pradesh, as reported by UP Varta News+. (Reported on 24 Mar 2021).

Again, Mahanta Jayashree Baba was attacked with knives in Firozabad. The attacker also looted one lakh rupees, reported Amar Ujala+ (Reported on 24 Mar 2021). The money stolen was kept for the construction work of the Ashram’s Goshala.

On 13th July 2020, the Hindu caretaker of Shiv Temple in Meerut, Uttar Pradesh, was beaten to death after he protested against remarks on his saffron attire. As per the reports, Anas Qureshi alias Janaleva passed objectional remarks on the attire of the victim identified as Kanti Prasad while he was coming back after paying the electricity bill. When Prasad objected to the remarks Anas passed, he started beating up the priest in the middle of the road. He somehow escaped and went to Quereshi’s house to appraise his family about the incident. Anas came from behind and again beaten him mercilessly. When Prasad’s family came to know about the incident, they rushed to Qureshi’s house to rescue him. They all went to the police station to file a complaint against Anas, where Prasad’s health started deteriorating. He succumbed to his injuries the next day. (Reported in Jagran dated 14 July 2020)+.

On September 23,  2019, a 65-year-old sadhu was allegedly beaten to death with stick by a group of unidentified assailants in  Aligarh’s Keerpur village. His body was spotted by some resident on Monday in the Shiva Temple. Local residents claimed that the priest, Baba Balak Das who came to the temple just two months ago, had objected to some people consuming liquor near the temple and that could be the reason behind his murder. (Reported in TOI dated 23 September 2019+).

As a matter of fact, Hindus are still unsafe in Uttar Pradesh being obvious through many cases of Jihadi rapes and murders of Hindu girls and women in the state; upsurge of Jihadi forces that caused exodus of Hindus from Kairana [1]+[2]+ and Deoband+ areas or many Islamic evils super-spreading in the state run by a so called Rightist Hindu party named BJP.

The present murder of Temple Priest in a Bulandshahr temple, is a glaring example that Uttar Pradesh is still under the control of anti-Hindu forces so far.