Huge Sikh Protests in Srinagar and Delhi against forced conversion and marriage of young Sikh girls with Muslims.

Bhupinder Singh Bhullar | HENB | Srinagar | June 28, 2021::  Massive  Sikh protests have been erupted in Jammu and Kashmir and Delhi against the abduction of two Sikh young girls allegedly on gunpoint and their forced conversion into Islam for making them married with elderly Muslim persons.  Shiromani Akali Dal (SAD) leader Manjinder S Sirsa has alleged that two Sikh girls have been forcibly converted and wedded to elderly men of a different religion in Jammu and Kashmir.

Following the allegations of ‘Love Jihad’ ploy against Sikh girls, the Sikh community staged protests and demanded an anti-conversion law in the Union Territory, similar to the one existing in Uttar Pradesh and Madhya Pradesh. They also demanded strictest punishment for the Muslim perpetrators in this case of abduction, conversion and forced marriage of the Sikh girls.

“Two Sikh girls kidnapped at gunpoint and forcibly converted and wedded to elderly men of a different religion. Appeal to Centre to take action,” ANI quoted SAD leader Sirsa as saying in Srinagar on Sunday.

Meanwhile, Sikh groups are protesting in New Delhi against the alleged forced conversion of Sikh girls in Kashmir. They plan to march from Man Singh road to Jammu and Kashmir House in the national capital. 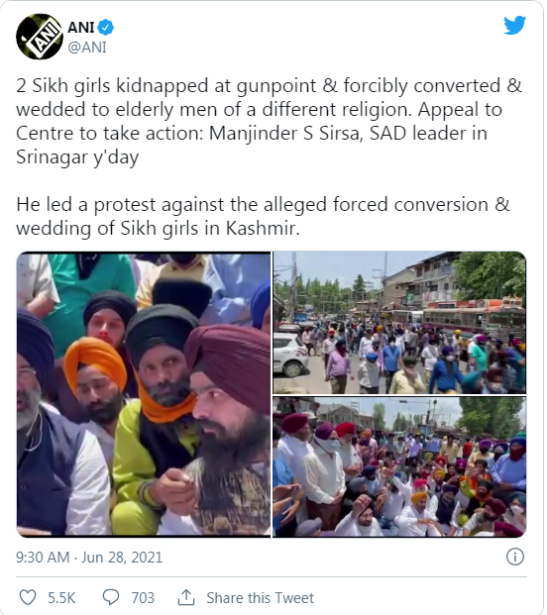 A Delhi Sikh Gurdwara Management Committee (DSGMC) delegation has also met with Jammu and Kashmir Lieutenant Governor Manoj Sinha and sought the safe return of Sikh girls, who were allegedly abducted, forcibly converted and married off in Srinagar.

LG Sinha addressed the committee’s concerns related to the safety of Sikh girls in the valley and the ‘harmful’ trend of religious conversion, DSGMC President Manjinder Singh Sirsa had said in a statement.

“Thanking LG, Jammu Kashmir Manoj Sinha Ji for immediately issuing directions with respect to the issue of forced Nikah of Sikh daughters in Srinagar. He has assured us that the Sikh girl who was forcibly converted would be returned back to her family. He addressed our concerns related to the safety of Sikh girls in the valley and this harmful trend of religious conversion,” said Sirsa.

He also demanded an anti-conversion law in the Valley which would mandate parents’ permission for the marriage.

“We also expressed the demand of having an anti-conversion law which would mandate parents’ permission. We also handed him the letter of Giani Harpreet Singh Ji, Jathedar, Sri Akal Takht Sahib,” Sirsa said.

Meanwhile, L-G Sinha has acknowledged the outcry and assured the return of the Sikh girl who was forcibly converted to Islam, to her family. As per local reports, an 18-year-old Sikh Girl from Badgam district was lured and forcefully converted to Islam at gunpoint. The second case of another girl from Srinagar who after attending a function of her Muslim friend has been missing. As per reports, she was married off to a boy present in the same function and has been missing since then.

President of the Gurudwara Parbandhak Committee has alleged that one of the Sikh girls abducted and converted was mentally unstable. He claims that the girl was lured on the pretext of love and marriage to convert her to Islam. The family of the girl has alleged that she has been married off to a 62-year-old man and had also registered a complaint with the local police. The Gurudwara Parbandhak Committee President also claimed that parents and relatives of the girl were not allowed inside the court due to COVID regulations.

It’s not new that Sikh girls had to be targeted by the Islamist for forced marriage after illegal conversion into Islam in Jammu and Kashmir.  On July 2, 2018+, one Sikh girl in Pulwama was threatened and assaulted by a Muslim boy for an inducement of forced conversion to marry her. But, the Sikh girl was escaped from the ploy anyway.

But, no hard reaction from the Sikh community was perceived then. Better late than never, this time Sikh community in Srinagar, Jammu and Delhi came out in the street against the Islamic conspiracy to abduct Sikh girls to marry them by Muslim persons after a forced conversion so Islamically.