Worldwide Kirtan Protest of ISKCON Against the Violence on Hindus in Bangladesh.

Global Protest in all ISKCON temples and centers in 150 countries.

ISKCON devotees protest in several parts of India against violence on Hindus in Islamic Bangladesh. 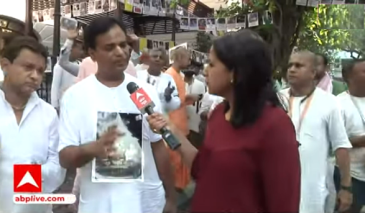 ANI | Kolkata | Oct 23, 2021:: ISKCON devotees held a protest in Kolkata on Saturday following incidents of violence, in which an ISKCON temple in Noakhali, Bangladesh was vandalised by a mob killing one devotee.

A kirtan was held as a part of the protest and the devotees lit candles in the memory of the victims of the violence against minorities in Bangladesh. Posters related to the vandalism were shown during the protest.

Radharaman Das, Vice-President, ISKCON said, “The cycle of violence that lasted for 10 days in Bangladesh was brutal. Many were killed and little children were raped. Till when we will keep dying like this? It is the duty of every government to protect its minorities. These protests are also meant to awake the government. It is not happening for the first time there, it keeps happening. As a part of the protest, Kirtan is also being held to pray that the souls of the deceased attain peace. People can come here and light a lamp, offer flowers.” 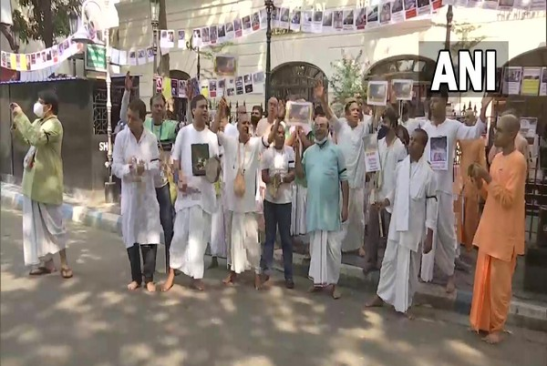 Other Indian states also witnessed protests from ISKCON on Saturday.

A protest was held in Ahmedabad as well by ISKCON devotees. Vishwa Hindu Parishad (VHP), Rashtriya Swayamsevak Sangh (RSS) and other organisations were also a part of this protest. 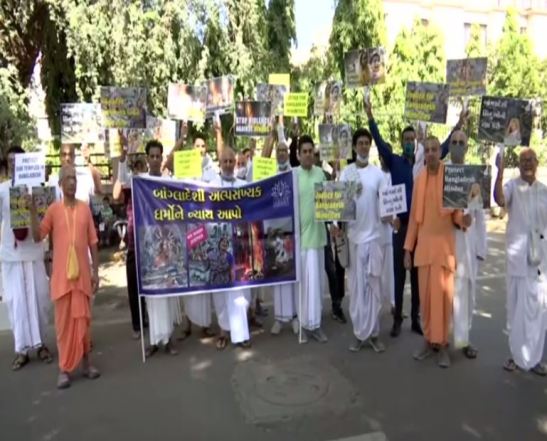 A peaceful Kirtan was held as a part of the protest and the protesting devotees demanded justice for the victims of the latest wave of violence against Hindus in Bangladesh.

“The Hindu community is shocked and saddened by the recent series of violent attacks upon the Hindu minority in Bangladesh, including our own ISKCON temples and members. They should get the freedom to practice their religion. Whatever happened was wrong. If this keeps happening, where we Hindus will go to practice our religion? We appeal the Bangladesh government that it should act to bring an end to the violence against minorities and to take tangible steps to ensure the long-term safety and well-being of all Bangladeshi citizens and temples. We also appeal to the Indian Government to take cognizance of it,” said Kalanath Chaitanyadas, President, ISKCON Ahmedabad. 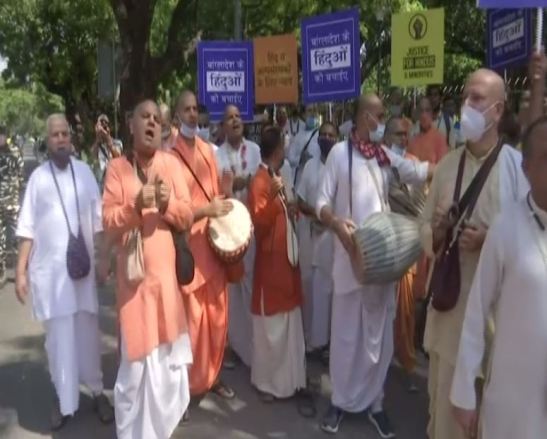 Protests were also held in Delhi over the recent communal violence against Hindus by ISKCON devotees and organisation members.Bhajan and Kirtan were performed at the protest site as ISKCON demanded justice for Hindus in Bangladesh.

Vrajendranandan Das, Director, ISKCON National Communications said, “We are protesting against the incident, which has taken place in Bangladesh where Hindus and minorities have been killed. We are also praying for them by doing ‘Bhajan and Kirtan’. We demand the Bangladesh government to take strict action against what is currently happening in their country and we want in future that they must assure the security of Hindus and minorities in Bangladesh. We trust them for that. They should ensure our protection in future. The protest shall impact the Indian government, which shares a good relationship with the Bangladesh government. We are also praying for the people who have been killed there.”

Communal tensions have gripped Bangladesh over the past few days following allegations of the Quran being dishonoured at a puja pavilion in Cumilla on October 13, triggering violence in several districts across the country.

At least four people were killed in police shootings during the attack on Puja locations in Chandpur’s Hajiganj on October 13 and in Noakhali’s Choumuhani, attacks on Hindu temples left two people dead on October 15.

ISKCON has called a worldwide protest at about 700 ISKCON temples across 150 nations today against the violence on Hindus in Bangladesh.