Hindu seers and saints gave a call of united war against Jihad.

Open calls for genocide and use of weapons against Muslim Terrorists made at Dharma Sansad organised by Yati Narasimhanand; clamour for police action grows out of misinterpretations. 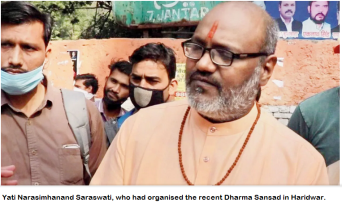 Upendra Bharti | HENB | Haridwar | Dec 27, 2021:: Controversial calls for annihilation of Islamic terrorism and use of weapons against Muslim terrorists were made at a religious event in Haridwar in Uttarakhand last week. The organizers of the event urged a broad spectrum Hindu unity for the cause.

As recordings of the speeches at the conclave made their way to social media, scores of people demanded action against the speakers, who have flaunted their links with the BJP and have said they stand by their ‘hate speeches’, reported in some electronic media. Many of the selective secular media India coloured the conclave as ‘anti-Muslim’ and a ‘call of genocide of Muslim’ in a blatant lie. But, most of the nationalist people in India pledged their support initiatives by Hindu saints and seers to curb the growing Islamic fundamentalism in India.

While the event was held between December 17 and 19, no FIR had been registered against the alleged ‘hate speeches’ till Thursday evening. If one of the speakers invoked Godse, another said he felt like pumping six bullets into former prime minister Manmohan Singh at one point in time. The office of Uttarakhand DGP Ashok Kumar reportedly said he had directed Haridwar DIG/SSP Yogendra Singh Rawat to take cognizance of the videos regarding the event and take action “in case a complaint is filed”.

The conclave or Dharma Sansad was organised by Yati Narasimhanand Saraswati, a religious leader who has been threatened and attacked by Islamic goons in the past for his uncompromising version against Islamic Jihad. According to a police complaint filed by a RTI activist Saket Gokhale, others associated with the gathering are Hindu Raksha Sena’s Prabodhanand Giri, BJP women’s wing leader Udita Tyagi and BJP leader Ashwini Upadhyay, who is out on bail in hate speech case. “Like Myanmar, our police, our politicians, our Army and every Hindu must pick up weapons and conduct a Desh Virodi Safayi Abhiyan [clean-up the anti nationals]. There is no other option left,” Giri can be heard in a video. Giri has said he stands by his statement in the interest of vulnerable majority Hindus in India under the threat of Islamic Jihad and havoc increase of Muslim population.

The next such conclaves against the Islamic Jihad are about to take place with one in Kurukshetra in Haryana, and two others in Uttar Pradesh’s Aligarh and Ghaziabad to discuss the topic “Shastra meva jayate (warrior power alone triumphs)”.

Whether anti-Hindu media houses like ‘NDTV’ or ‘The Wire’, they never have to worry about funds. In name of saving democracy, they get money from various sources. We need your support to fight them. Please contribute whatever you can afford. Help us voluntarily to help content making in the exercise of Hindu Rashtra.

2 comments on “Hindu seers and saints gave a call of united war against Jihad.”