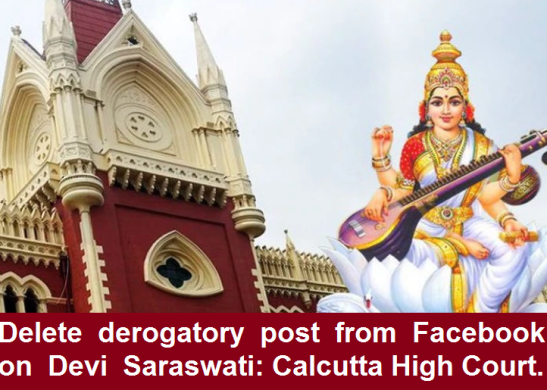 Susmita Bhattacharia | HENB | Kolkta | Feb 18, 2022:: The Calcutta High Court on Monday directed the petitioner to immediately share the URL details of an alleged offensive post about Goddess Saraswati with the authorities of Facebook India in order to authorise the removal of such an offensive post. The Court also directed the petitioner to take appropriate steps to implead the alleged offender as a party in the instant proceedings.
.
A Bench comprising Chief Justice Prakash Shrivastava and Justice Rajrashi Bharadwaj was adjudicating upon a Public Interest Litigation (PIL) petition seeking directions for the removal of an offensive Facebook post about Goddess Saraswati. The alleged offender had purportedly posted that worship of Goddess Saraswati must be discouraged in schools as the Goddess is portrayed to have an ‘illicit relationship’ with her father.
.
The incident happened a few weeks ago. Not only the demanding to stop Saraswati Puja in school, a person posted deregotary matters in the name of Devi Saraswati on Facebook. That post quickly went viral on social media. The petitioner claims that if a post is made that is offensive or incites violence, Facebook automatically removes it, but in this case that rule was not obeyed.  A woman named Madhurima Sengupta has filed a public interest litigation in the High Court as her Hindu sentiment was drastically hurt.
.
Advocate General S.N Mookherjee appearing for the State of West Bengal apprised the Bench that the alleged Facebook post was indeed an offensive post about Goddess Saraswati and must be removed. He also informed the Bench that the State government had written a letter to the authorities of Facebook India to identify the account details of the alleged user.
.
Senior advocate Mukul Rohatgi appearing for Facebook India submitted before the Court that since the petitioner has not disclosed the URL details of the alleged offensive post, it is difficult to trace such a post and find out whether such an offensive post has been taken down or not. He further submitted that his client would provide basic subscriber information relating to the alleged offender with the State govt as well as the petitioner of the instant case.
.
The senior counsel further apprised the Bench that although the name of the alleged offender had been mentioned in the petition, however the alleged offender had not been imploded as a party. Accordingly, he prayed for directions to implead the alleged offender as a party to the present proceedings.
.
“We don’t contest if Court orders its removal”, the senior counsel Rohatgi remarked further in relation to allegedly offensive Facebook posts.
.
The petitioner was also ordered to file English translations of the documents annexed with the petition. The Court also took on record the supplementary affidavit filed by the petitioner and further directed the petitioner to serve a copy of such a supplementary affidavit to the respondents.
.
The matter is slated to be heard next on February 22.
.
The petitioner has been represented by Advocates Mita Banerjee Ray and Barun Kumar Ray.