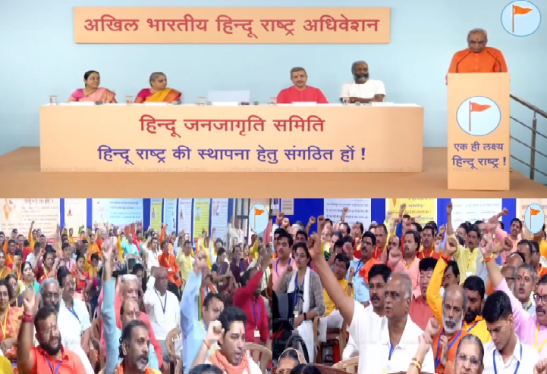 Some 1000 representatives of over 350 Hindu organisations from USA, UK, Hong Kong, Singapore, Fiji, Nepal as well from 26 States of India took part in the 10th Akhil Bharatiya Hindu Rashtra Adhiveshan in Goa to regenerate a sustainable mechanism for building the Hindu Rashtra for more than 1 billion Hindus in this world.

At the successful end of this convention the following resolutions were passed by the participants with great enthusiasm and pride.

These resolutions are likely to be sent different State and Central Govt accordingly.

The organizers have expressed their pleasure and confidence to build Hindu Rashtra in a democratic way in the shape of Cultural, Constitutional and Sovereign Hindu Rashtra in Bharat and Nepal within 2025.

Courtesy: All the sources used above.